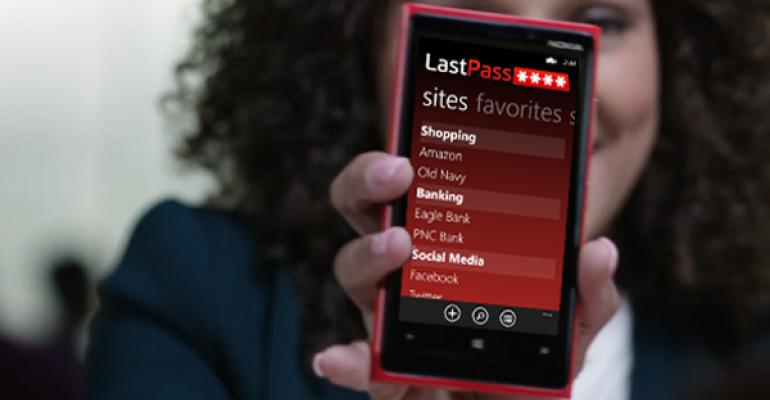 If you use LastPass and Windows Phone, this one is a no-brainer

I’ve long recommended the LastPass cloud-based password management solution and this week the LastPass Windows Phone app received a major upgrade with support for Windows Phone 8. If you’re using Microsoft’s latest smart phone platform, as I am, you’re going to want this app.

Note: While the LastPass app is free, it requires that you subscribe to LastPass Premium, which costs just $12 per year. I do use and recommend LastPass Premium. But if you’re not sure, you can use LastPass for Windows Phone 8 for free for 14 days to experience the Premium functionality.

As noted by LastPass, the new version of the LastPass app doesn’t just add support for Windows Phone 8 (a version is still available for Windows Phone 7.5 as well), it also comes with a nice makeover, with as red/black LastPass color scheme and a more friendly, Windows Phone-centric UI. (And if you use the white “light” background as part of your theme, LastPass now respects that and presents an even cleaner-looking white UI.)

This update to the app adds support for LastPass identities, alphabetical sorting, new Secure Notes and Favorites panels (and standard Windows Phone app bar icons, finally), site pinnng, and a ton of other new features. But the big one here, to my mind, and this cuts to the heart of what makes LastPass so valuable, is that the app now supports the creation of secure passwords.

See, I use and recommend LastPass specifically because it’s much more than just a secure place to store passwords. It also helps you generate secure new passwords for sites you’re signing up for, and with this addition, you can now do so on the go too.