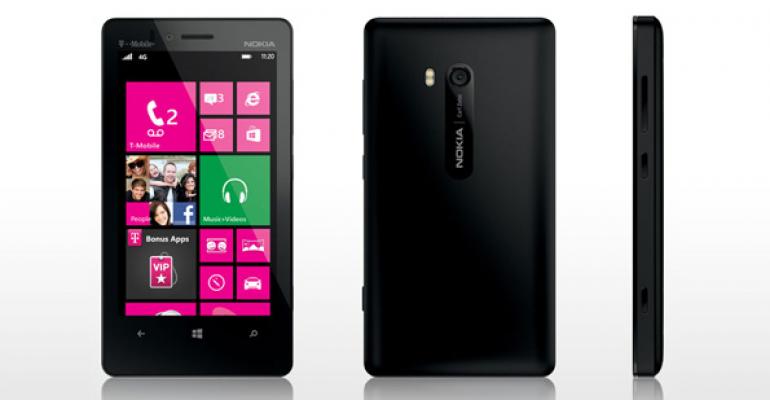 While the Nokia Lumia 810 is a capable, workman-like Windows Phone 8 handset, it offers few of the wonderful surprises that grace its sibling, the Lumia 820. And T-Mobile users have a better alternative in the HTC Windows Phone 8X.

Not that the Lumia 810 is horrible, it’s not. It’s a solid, capable phone, well made in the way all Nokia products are and graced by the superior Windows Phone 8 OS. It’s just that the 810 falls short compared to Nokia’s other Lumia 8xx products, especially the Lumia 820, which is excellent. And more to the point, on T-Mobile, where the Lumia 810 is an exclusive offering, there is that better HTC option.

(Be sure to check out Nokia Lumia 810: First Impressions and Screenshots as well.)

Put side-by-side with the 820, you can see the problem: Where the 820 is small and nicely shaped, the 810 is larger and blockier, and its sharper front edges make it a bit less comfortable to hold.

When Nokia announced that it would counter it’s AT&T-exclusive Lumia 820 with other Lumia 8xx models for other US carriers (including this device and the Verizon-based Lumia 822), I naturally assumed that they would all share common bodies, so that users could mix and match between the available colored backs, which also provide wireless charging functionality to the 820. But the 810’s differently sized body precludes such sharing. Worse, there are no replaceable backs for this model at all (even though the back is indeed removable). You’re stuck with black.

Internally, of course, the Lumia 810 does resemble the 820 quite a bit. Both feature the same 1.5 GHz dual core Snapdragon S4 processor. Both feature a mid-range 4.3-inch 800 x 480 display. (Curiously, Nokia specifies Corning Gorilla Glass 2.0 for the Lumia 810, but not the 820. That can’t be right, but it’s worth pointing out.) Both ship the same 1 GB of RAM and with only 8 GB of internal storage but support an additional 64 GB of microSD-based expansion. Both have a surprisingly decent 8 megapixel camera.

Where the two devices veer away from each other is in their support for wireless technologies—as a T-Mobile device, the Lumia 810 supports up to HSPA+ (3G or pseudo 4G, depending on who you ask), whereas AT&T’s Lumia 820 can handle true LTE 4G speeds—and in battery size: The larger 810 sports an 1800 mAh battery while the 820 has a smaller 1650 mAh unit. Both, of course, are user replaceable, though I find the 810’s back harder to crack open.

If comparing the Lumia 810 to the 820 seems a bit unfair since you couldn’t choose between these devices on the same network, well fair enough. But the point here is that Nokia is gracing AT&T with a superior mid-market device, whereas the T-Mobile-based 810 seems to come in right as expected, with mid-level specs. That makes it a bit more ignorable.

Worse—and this is really insulting—T-Mobile charges twice as much ($100) for the Lumia 810 as AT&T does ($50) for the Lumia 820. So not only are you getting less, you’re paying more for less. And doing so on a network with no LTE capabilities.

T-Mobile users do have a choice, and for those on that network, I feel that the HTC Windows Phone 8X is the better one overall. Of course, T-Mobile charges even more for that device--$200—but I feel it’s worth it. You get a much prettier device, more internal storage (16 GB, though it’s not expandable), a higher resolution 1280 x 720 HD display, and Beats Audio, which I’ve found really does make a difference.

There is one area where the Lumia 810 beats out the HTC 8X, however: the Nokia-exclusive apps. Nokia provides a wide range of great apps only to its own devices, including Nokia Maps, Nokia Drive, Nokia Transit, Nokia City Lens, Nokia Music, and others. You should seriously weigh your need for these apps in any decision between this device and the 8X.

After my better-than-expected experience with the Lumia 820, T-Mobile’s Lumia 810 has brought me back to earth. This is exactly the mid-level experience I’ve come to expect from this type of phone, and if it hadn’t been for the 820, I’d never have expected anything better. So while the Lumia 820 is absolutely a solid, well-made device, and does provide those great Nokia apps, T-Mobile customers can do better.

For those of you on Verizon Wireless, I don’t have a Nokia Lumia 822, sorry. (And both Nokia and Microsoft have ignored my repeated requests to review this device and the Lumia 920 for some reason.)