/sites/all/themes/penton_subtheme_itprotoday/images/logos/footer.png
Recent
Recent
Mastercard Begins Facial-Recognition Rollout With Retailers
May 17, 2022
IT Pros Aren't Missing the Office
May 16, 2022
25 Years Ago: How Deep Blue vs. Kasparov Changed AI Forever
May 13, 2022
Create If Else Statements in PowerShell
May 12, 2022
Featured
What Makes Data Science Teams Thrive
Mar 04, 2022
5 Ways for Data Scientists to Improve Communication Skills
Apr 21, 2022
How to Spot the Warning Signs of Ransomware Attacks
Apr 20, 2022
Best Windows 11 Tips and Tricks: Top 11 Articles
Mar 18, 2022 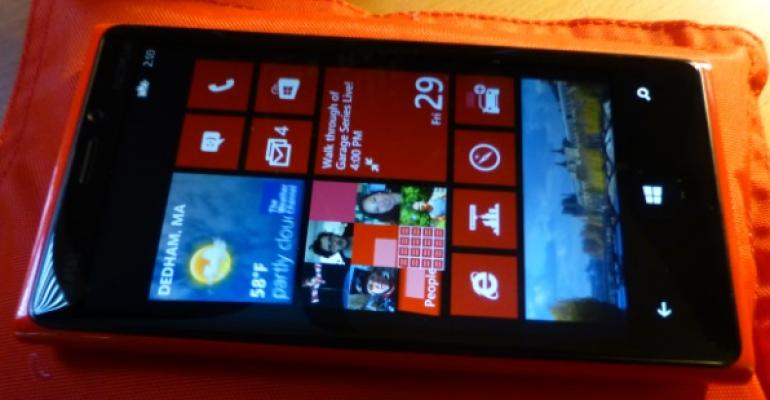 Overall, the Lumia 920 is the best Windows Phone 8 handset on the market today

Nokia’s Lumia 920 is exactly what you think it is, and it is the overall best Windows Phone 8 handset on the market today. But that accolade comes with a couple of caveats, including a size and heft that many will find off-putting. But you get used to it, and the pros absolutely outweigh the cons.

Note: You don’t have to be paying a lot of attention to know that this review is almost six months late. I will point to the Windows Phone team for this delay, but give thanks to Nokia for finally stepping up to the plate with a review unit.

When I wrote that I had chosen the HTC Windows Phone 8X as my next smart phone, I received exactly two types of feedback. There were those who had chosen similarly and were happy to see that I had been won over by the 8X’s incredibly thin, light and beautiful design. And then there were the Nokia fans.

For purposes of this discussion, the Nokia fan base can be divided into two groups. There are those who simply prefer Nokia’s offering over those from other companies, and in some cases this preference dates back many years and is somewhat unrelated to Windows Phone specifically. And they’ve got a point. As I’ve written in a series of articles recently—The Nokia Advantage: Customizable Design, The Nokia Advantage: Accessories, and The Nokia Advantage: Apps—this company is the complete package and provides a level of ecosystem support that is utterly missing in action at HTC or Samsung.

Lumia 920 owners form the second and even more vocal group. These people were often outraged at my choice, wondering how I could give up the superior 920 camera and the superior Nokia apps, especially. And they let me have it, via email, on Twitter, and in the comments on this blog.

This audience, too, has a point.

Before moving on to the accolades, however, let me get a few of the negatives out of the way. And they are indeed important to understand.

First, this is a huge and heavy device. The word that comes to mind is dense, as is the case with the Surface with Windows 8 Pro tablet. That is, it’s heavier than you expect it to be, even when you see how big the device is. Now, Lumia 920 fans are already writing their retorts to this claim, and will explain to you (truthfully) that you do get used to this heft. And you do. But the fact remains that every single person that’s every asked to see my Lumia 920 review unit has immediately uttered a variant of the same exact phrase: “Wow. This things is heavy.” Every. Single. Person.

Second, and perhaps less problematically, it’s important to know that the Lumia 920 does not support expandable storage. This will only be an issue for some folks, and the 32 GB of onboard storage is certainly enough for most. But with cheap 64 GB micro-SD cards available, it’s a shame Nokia didn’t add this support to what it calls its flagship device. It’s a curious omission. (The HTC 8X also lacks this feature.)

Third, I feel obligated to mention that the first Lumia 920 I received—an apparently rare yellow unit—would constantly reboot all day long, every day. I had to ask for a second device, and that one, a gorgeous red unit, has performed flawlessly.

From there on out, it’s all good news.

Let me defend the heft of the device first. As anyone who owns a unibody Lumia (800, 900, 920) can tell you, these devices are solid: Solid from a build quality perspective, solid from a reliability perspective. I once dropped my Lumia 900 from a height of at least six feet and not only did it survive a fall to concrete that would have utterly destroyed any iPhone, it just kept going, like the proverbial Timex. You can’t kill these things, and while many users of other phones will add heft to their otherwise svelter devices via an external case, this is completely unnecessary with the 920.

And truth is, you do get used to it. Most people aren’t sitting on the pile of smart phones I have, so in moving back and forth between various devices, the sheer denseness of the 920 is routinely obvious. But on the road, using just the 920 … you get used to it. And I suspect that most people would indeed simply stop noticing this weight if this was their only phone. Certainly, there is a trend these days in bigger devices.

The build quality, too, is amazing, though I think Nokia is using different materials in different color versions of the device. The red version of the 920, for example, is a high-gloss slab of plastic, and quite different to the look and feel of my previous cyan Lumia 900, which was sort of a matte composite. It feels high-quality in the hand, but before you even get that far, just a quick peek tells you the thing is well made. It’s like the Mercedes of smart phones.

In use, the Lumia 920 doesn’t disappoint either. The 4.5-inch screen is suitably enormous and the 768 x 1280 screen (or what we might call HD+) is gorgeous. The port and button layout is classic Nokia with the headphone jack (centered) and SIM tray on the top, micro-USB, speaker and microphone on the bottom, and the volume up/down, power, and camera buttons all on the right side for easy one-handed use.

The big deal with the Lumia 920, of course, is the 8.7 megapixel camera. Here, we find the single best camera on any Windows Phone handset, and by a wide margin. And while it’s not possible for me to test every smart phone out there, I did take dozens of side-by-side shots comparing this phone to an iPhone 5, which is generally understood to offer the best smart phone camera experience. And it does: The iPhone 5 beat the 920 by a thin margin, in my tests. But I feel that the 920’s biggest strength in the camera department may put it over the top for many: It takes often stunning shots in low light, thanks to an interesting “flash assist light” that briefly triggers the flash even when you’ve turned it off, but just for focusing purposes. The results are fascinating, and while the flash triggering can be annoying, the pictures aren’t washed out in the slightest, and they’re often fantastic. We’re trained to think that the flash is about to ruin every shot we take in low-light. But in this case, that doesn’t happen.

It also sports NFC for sharing, pairing, and payments (though Windows Phone 8 doesn’t offer the latter anywhere outside of France, currently), and wireless charging, two leading edge perks. Beyond that, the hardware is standard fare, with a 1.5 GHz dual-core Snapdragon S4 processor, 1 GB of RAM, 32 GB of internal storage, 802.11 a/b/g/n, and Bluetooth 3.0.

Software-wise, of course, the Lumia 920 shines thanks to both Windows Phone 8—the superior smart phone platform—and Nokia’s amazing range of exclusive apps, which I’ve written about separately in The Nokia Advantage: Apps. And it’s supported by the widest range of Windows Phone accessories anywhere (also described previously, this time in The Nokia Advantage: Accessories). These are important distinctions, because Nokia stands alone in the Windows Phone world for its support of the ecosystem and many of its best solutions are exclusive to Lumia.

Put simply, there’s precious little not to like about the Lumia 920. Yes, it’s big and heavy, and while Nokia fans bristle every time they read this bit of criticism, it’s a valid issue, and something to consider before buying. But the Lumia 920 is excellent. Best of breed even. It has a superior camera, the best by far of any Windows Phone, and it’s backed by Nokia’s superior ecosystem of apps, services, hardware accessories, and support. It has the highest resolution screen supported by Windows Phone, the best specs, and stunning build quality. It is, in many ways, the single best Windows Phone handset available.

Highly recommended. Just get a few curls in before heading out to AT&T or your local carrier.