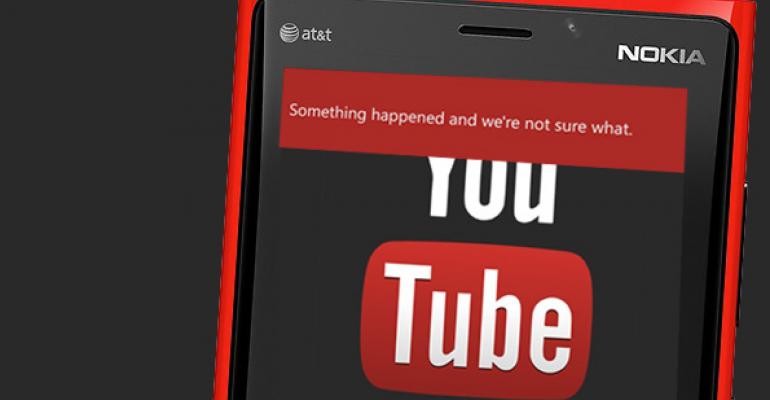 Microsoft Wins the High Ground in War with Google

Calls BS on “do no evil”

Google’s spiteful and unreasonable blocking of YouTube services on Windows Phone reached absurd levels this past week: After Microsoft issued what it said was the officially sanctioned YouTube app for the platform, Google blocked it just a day later. In this astonishing Cold War between two of tech’s biggest giants, Microsoft has done the right thing by users and Google has not. Why is Google so afraid of Windows Phone?

As with previous issues between the two companies—the widely criticized but deadly-accurate Scroogled campaign, for example, or Google’s inane decision to end support for Exchange ActiveSync (EAS)—I’m more surprised by the absurd Google apologists I see in the press and in tech blogs than I am by Google’s standard user-adverse behavior. Folks, wake up. Google is consistently doing the wrong thing. The wrong thing morally and the wrong thing for users.

And so it is with YouTube on Windows Phone.

According to the Microsoft executive in charge of the firm’s litigation and antitrust activities, the firm addressed all of Google’s previous issues with the YouTube app for Windows Phone 8 before republishing it last week. Then Google blocked the app, so that users today see the following error. Now, nothing works.

“Google asked us to transition our app to a new coding language, HTML5,” Microsoft corporate vice president David Howards explains. “This was an odd request since neither YouTube’s iPhone app nor its Android app are built on HTML5. Nevertheless, we dedicated significant engineering resources to examine the possibility. At the end of the day, experts from both companies recognized that building a YouTube app based on HTML5 would be technically difficult and time consuming, which is why we assume YouTube has not yet made the conversion for its iPhone and Android apps.”

“For this reason, we made a decision this week to publish our non-HTML5 app while committing to work with Google long-term on an app based on HTML5. We believe this approach delivers our customers a short term experience on par with the other platforms while putting us in the same position as Android and iOS in enabling an eventual transition to new technology. Google, however, has decided to block our mutual customers from accessing our new app.”

Howard goes on to explain that Google’s reasons for blocking this new version of the YouTube app for Windows Phone are completely “manufactured”—which they are—to ensure that Windows Phone users can’t have the same quality YouTube experience that users on iPhone and Android receive. “The roadblocks Google has set up are impossible to overcome, and they know it,” he adds.

More troubling, Howard explains that Google is using secret APIs in its own YouTube app implementations and that it won’t provide those APIs to Microsoft even though they’re required to provide the YouTube advertising experience that Google demands. Folks, that’s not ironic. It’s full-blown hypocritical.

“Google just doesn’t want Windows Phone users to have the same experience as Android and Apple users, and their objections are nothing other than excuses,” Howard says in a clear language that Microsoft should examine using more frequently. “Nonetheless, we are committed to giving our users the experience they deserve, and are happy to work with Google to solve any legitimate concerns they may have. In the meantime, we once again request that Google stop blocking our YouTube app.”

As do all Windows Phone users. Google, you suck.