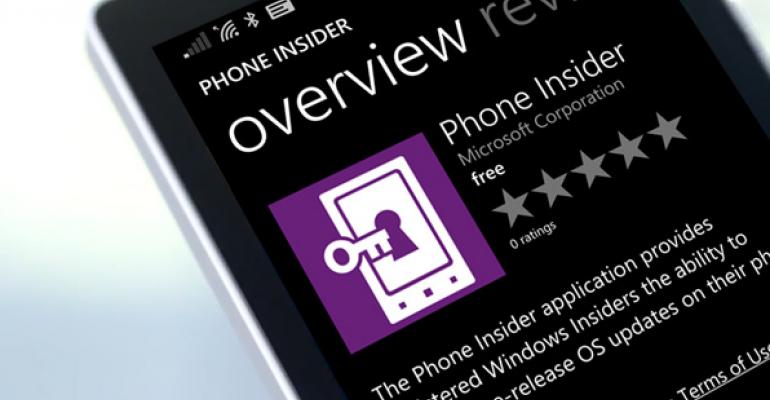 And you can get the app now

Microsoft has posted a new Phone Insider app to the Windows Phone Store, the latest sign yet that the Windows Technical Preview will soon be expanded beyond PCs and tablets to smart phones. While the app currently doesn't offer much in the way of functionality, the official description is clear enough.

This is different from the Preview for Developers app, which lets Windows Phone users upgrade to the latest Windows Phone version—currently Windows Phone 8.1 Update 1—before it's released by wireless carriers. The key phrase there is "Windows Insiders": that's the name Microsoft gives to people who participate in the Windows Technical Preview for Windows 10.

So this new Phone Insider app is clearly a version of the Preview for Developers app, but for Windows 10 builds: It will open up the virtual flood gates, so to speak, letting the Phone Update settings app find new Windows 10 builds as they're released.

At the moment, however. it doesn't do much, unless of course you work at Microsoft: it lets you sign in with your Microsoft domain account to access current builds.

Soon, he says, rubbing his hands together greedily. Soon.