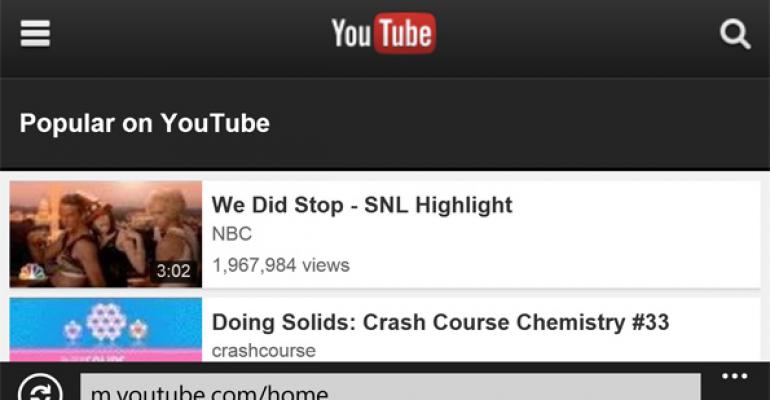 Well, the long-running war between Google and Microsoft over the latter's creation of an unauthorized/authorized YouTube for Windows Phone 8 has ended in defeat ... for users. Microsoft has released a new version of the app that simply pushes users to YouTube on the web. So much for that brief and wonderful détente between the two companies.

The history of this battle is more convoluted (and boring) than the plot to "The Phantom Menace." But it goes something like this:

December 2012: Google announces that it has no plans to ship any apps for Windows 8 or Windows Phone beyond a basic Search app. That same day, it ships the first version of Google Maps for iOS to arrive after Apple unceremoniously dropped Maps from the core OS app set.

May 2013: After Microsoft delivers a surprisingly excellent "official" YouTube app for Windows Phone 8, I name it as an app pick. "YouTube for Windows Phone 8 not only looks great, it works great too, and integrates nicely with your Google account and any subscriptions you may have," I write.

May 2013: In a bizarre attack, Google CEO Larry Page blames Microsoft for the rift between the two companies, saying that the firm "took advantage of interoperating with" Google by releasing that YouTube app that does not include Google advertising functionality. Not so, says Microsoft in a statement: "Google has refused to work with us to develop a [YouTube] app on par with other platforms. Since we updated the YouTube app to ensure our mutual customers a similar YouTube experience, ratings and feedback have been overwhelmingly positive.  We’d be more than happy to include advertising but need Google to provide us access to the necessary APIs. In light of Larry Page’s comments today calling for more interoperability and less negativity, we look forward to solving this matter together for our mutual customers."

May 2013: Microsoft updates the YouTube app to address Google's concerns. "We have been in contact with Google and continue to believe that our two companies can work together to hone an app that benefits our mutual customers, partners and content providers," a Microsoft representative tells me. "We look forward to working with Google to maintain a great YouTube experience for the growing number of people who rely on both of our respective products." The new version of the app removed the ability to download YouTube videos but still can't display Google advertising.

August 2013: Nope. Google almost immediately blocks access to YouTube from the Windows Phone 8 app, arbitrarily claiming that Microsoft didn't deliver an app based on HTML5, which is apparently required for all YouTube mobile apps. "This was an odd request since neither YouTube's iPhone app nor its Android app are built on HTML 5," Microsoft noted at the time. "For this reason, we made a decision this week to publish our non-HTML5 app while committing to work with Google long-term on an app based on HTML5. We believe this approach delivers our customers a short term experience on par with the other platforms while putting us in the same position as Android and iOS in enabling an eventual transition to new technology." Sounds reasonable. Nope. "Google, however, has decided to block our mutual customers from accessing our new app."

Since then, the YouTube app for Windows Phone 8 has been in a strange purgatory, blocked and not working properly. It was updated today. The new version isn't so much an app as it is a web link: When you launch it, Internet Explorer opens and navigates to the YouTube web site. Which, by the way, works well enough. But it's just a slap in the face to anyone that uses Windows Phone, of course.

Microsoft hasn't (yet) addressed its decision to do this, but I think it's fair to say that this is in fact a better experience than a blocked app. And what the heck, the new "app" is certainly tiny enough.