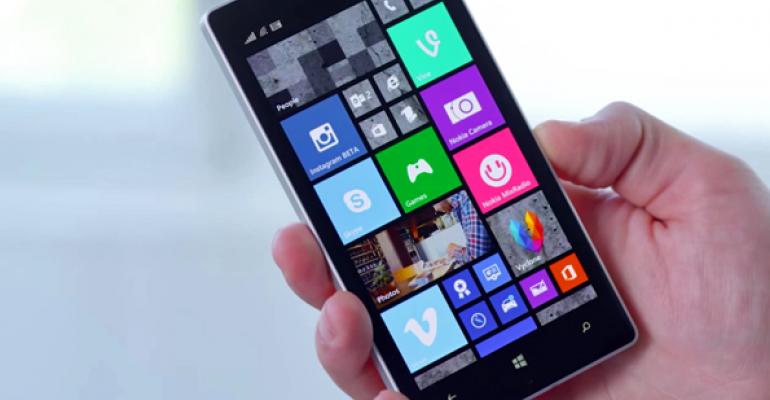 I Bought a New Windows Phone

Maybe you should too

Like many, I was hoping to see a new Lumia flagship before the end of 2014, and while I was pleasantly surprised in some ways by both the Lumia 735 and 830, neither offers the level of performance or best-in-market camera quality I had come to expected from Microsoft/Nokia's high-end devices. So I pulled the trigger on an unlocked Windows Phone flagship that will hopefully take me through at least the first half of this year. Or until Microsoft gets off its low-end fixation and satisfies the needs of its biggest fans.

And Windows Phone's biggest fans stick with the platform, by the way. I've been a Windows Phone user longer than anyone outside of Microsoft, and I see nothing on the horizon that will alter my course. The important thing to remember here is that I have access to all of the latest gadgets, have flagship iPhone and Android handsets within arm's reach as I write this ... and I choose, prefer and recommend Windows Phone. I just like it better. By a wide margin.

So. Which Windows Phone handset did I choose?

I never received a 930 for review but I did review the US version of this device, the Lumia Icon, which is basically identical. As I wrote in that review, "the Nokia Lumia Icon is a perfect combination of size, screen, camera and capabilities, and the single best smart phone on the market." The reason I haven't been using it ever since is that I'm on AT&T, and the Icon is a Verizon exclusive.

The Lumia 930 is an international/GSM version of the Icon. There were a few improvements in addition to GSM support: It was available in more colors—green and orange, in addition to the original's black and white—and was "the world's first smartphone that can capture and playback high-quality audio in Dolby Surround Sound." It also comes preinstalled with Windows Phone 8.1, where the Icon shipped with 8.0 (and has still yet to be officially updated by Verizon, the bastards).

Visually, the 930 resembles the more recent Lumia 830. But the 830 has a few advantages: It is thinner and lighter, and the color back and be easily removed by the user and replaced with a different color shell, or with a flip case that can cover the screen. But the Lumia 930's advantages put it over the top. More on that in a second.

I wanted to make a few points about this device because there are specifics and generalities to this purchase which I think are important. They are:

What I spend my own money on is important. I routinely recommend products that I've reviewed, and those reviews should be taken for what they are: Honest, objective recommendations for products that I think readers will appreciate and see value in. But you should also pay attention to my "What I Use" articles, because they represent the next level of recommendation: These are products that are so good and so useful that I actually use them myself. And since I spend my own money on these products—unless otherwise noted—you know I really do see the value.

No contract/unlocked is important. One thing I've really awakened to in the last year is that the US carrier model of two year contracts and indentured servitude is broken. Going forward, I will always purchase my own unlocked phones outright and not add their cost to my monthly bill. There are many, many reasons for this—in my case, the ability to use these devices with international SIMs while traveling, plus just general portability between GSM-based carriers—but whatever. No contract/unlocked is the way forward for me.

The loss of LTE isn't important ... to me. ... It may be to you. Here's what I can say: For much of this past year, I've been using the international versions of various Lumias—the Lumia 530, 535, 735, and 830 most recently—on AT&T. This means that I get HSPA/HSPA+ speeds only, a type of network that carriers call/called 4G but is really "3.5G." This means I do not get LTE speeds on these devices, and since the 930 I bought doesn't support any of AT&T's LTE bands, it means I will only be getting HSPA+ speeds. I don't care. I've never once found this to be an issue.

Camera quality is really important ... to me. During my home swap vacations in 2013 and 2014, I used the Lumia 1020 and 1520, respectively, to take all of the family photos. And they were stunning. These experiences taught me that I really enjoy the convenience of having the world's best smart phone camera with me at all times. And while the Lumia 735 has surprised me by its day-to-day quality—and bland 830 photos have disappointed—none of the late-2014 Lumias come anywhere close to Microsoft/Nokia's flagships. The 930 does: This is the exact same camera found in the 1520 and Icon. And it is superb.

Performance is important ... to me. While I have been routinely pleased with devices like the Lumia 830, 735 and 535 overall, these devices aren't exactly heavyweight hitters when it comes to performance. You see this most frequently in a few places like app launching and app switching—where you get used to that animated "three dots" thing—and in the camera app, not just in taking photos but in switching to the camera roll. Look, Snapdragon 200 and 400 processors are great mainstream engines for Windows Phone. But they simply do not measure up to the quad-core 2.2 GHz Snapdragon 800 processor in the 930. I've been playing with Ford Fiestas for too long. I want the BMW.

I'll let you know how I like the Lumia 930 when it arrives. But come on. You know I'm going to love it.