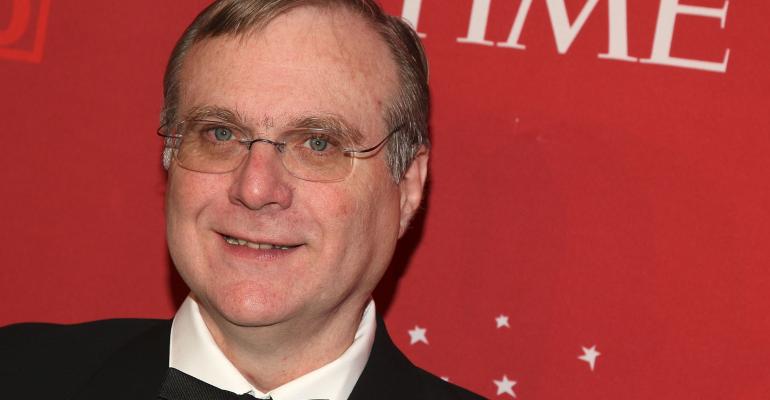 Allen died on Monday in Seattle from complications of non-Hodgkin’s lymphoma, according to a statement from Vulcan Inc., his investment firm. Allen’s source for his varied investments and sizable charitable donations was his once-major stake in Redmond, Washington-based Microsoft. He had a net worth of $26.1 billion, according to the Bloomberg Billionaires Index.

(Bloomberg) -- Paul Allen, who co-founded Microsoft Corp. with fellow billionaire Bill Gates and used the fortune he made from the iconic technology company to invest in professional sports teams, cable TV and real estate, has died. He was 65.

Allen died on Monday in Seattle from complications of non-Hodgkin’s lymphoma, according to a statement from Vulcan Inc., his investment firm. Allen’s source for his varied investments and sizable charitable donations was his once-major stake in Redmond, Washington-based Microsoft. He had a net worth of $26.1 billion, according to the Bloomberg Billionaires Index.

Allen, along with Gates, helped create an entire industry selling software for a new breed of smaller, more affordable and widely accessible computers.

"Paul Allen’s contributions to our company, our industry and to our community are indispensable," Microsoft Chief Executive Officer Satya Nadella said in a statement. "As co-founder of Microsoft, in his own quiet and persistent way, he created magical products, experiences and institutions, and in doing so, he changed the world."

He stepped down as an officer of the company in 1983 because he was grappling with Hodgkin’s lymphoma. In 2009, Allen was treated for non-Hodgkin’s lymphoma, which two weeks ago he said had returned.

“A high-tech demigod” is how Sports Illustrated described the man who came up with the name for Microsoft, a company whose ubiquitous products include the Windows operating system and the Office suite of software. “He is one of the richest men in history, a figure of such dizzying wealth and eclectic tastes that he recently donated $100 million to brain research and $25 million to the search for extraterrestrial life,” the magazine wrote in a 2007 profile.

Paul Garland Allen was born on Jan. 21, 1953, in Seattle to Kenneth and Faye Allen. His father was a university library executive and his mother was a teacher.

Allen went to the Lakeside School, where he met a younger Gates as the two worked on early computer programs in the school’s lab. In a time when computers were rare, Allen lurked in the University of Washington computer labs, using the machines and aiding students and professors. Finally a professor asked if he was actually a student and Allen was forced to admit he wasn’t. But he was allowed to stay, as long as he continued to be helpful, Allen said in a 2017 interview.

He attended Washington State University but didn’t graduate, dropping out and moving to Massachusetts to be closer to fellow computer aficionado Gates, who was attending Harvard University.

In 1975, they founded a company they called Micro-Soft in Albuquerque, New Mexico, after Allen saw a new Altair computer kit on the cover of Popular Electronics magazine and realized computer prices would drop and software would be necessary.

As they struggled to produce operating software for Altair and International Business Machines microcomputers, Allen was regarded as the brains of the partnership, while Gates was the marketing whiz, according to Laura Rich, author of “The Accidental Zillionaire,” an unauthorized biography of Allen.

Allen, a Microsoft general partner, initially held the title of vice president. When he left in 1983 for health reasons, he was executive vice president in charge of research and new product development. He remained on the board until 2000 and was a senior strategy adviser after that.

Allen formed Vulcan Inc. in 1986 as his chief investment vehicle for his life after Microsoft.