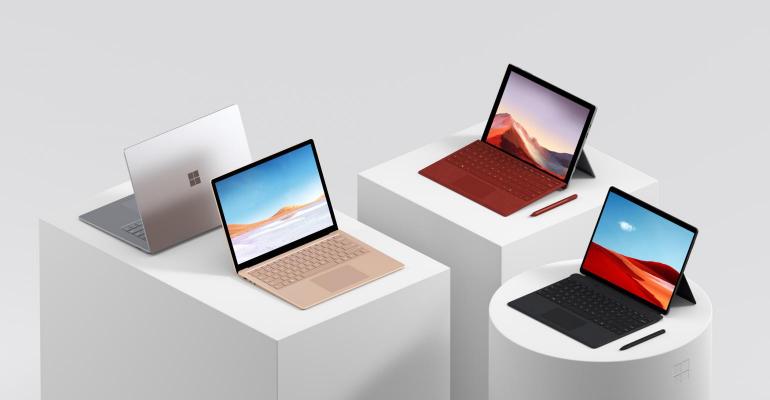 It has been almost eight years since Microsoft ventured into the PC market with their unique Surface branded hardware. Those early days were rough for the Redmond company. These days it seems more willing to take a step back from a potential hardware release when the timing isn't right.

IT admins tasked with juggling an enterprise equipment budget should take note of Microsoft chief product officer Panos Panay’s recent announcement that Microsoft is shifting its focus with Windows 10X away from the Surface Neo and targeting single-screened devices with the new operating system variation. Choosing to deliver the containers-based version of Windows 10X to existing single-screen devices will be a huge plus for enterprise customers looking to extend the life of some of their hardware and increase overall security, reliability and manageability.

These recent decisions about Windows 10X and Surface Neo are coming from a very different leadership team than the one that made decisions about launching Surface RT and its second-generation iteration – Surface 2. That should provide a certain level of confidence in enterprise IT leadership as the search for hardware options continues. Surface has become a reliable platform – enhanced by the nearly five years of Windows 10 development – and is well worth a closer look these days as a desired hardware platform.

Surface’s position as an enterprise-friendly budget extender is the culmination of nearly a decade of lessons in how to design a tablet for the modern workplace. To understand how they got here, let’s have a brief history lesson by examining the ups and downs of the Microsoft Surface release cycle throughout the years – and how Microsoft's approach to hardware has changed.

The rough journey of Surface started right at the beginning. The first device launched, the Surface RT tablet, ran an ARM-based version of Windows 8. That meant the device could only install apps and software from the Windows Store. That meant a huge library of x86 based software was incompatible with this first piece of Surface hardware.

Ultimately, in 2013, the company had to take a $900 million dollar write-down on Surface RT inventory due to its poor sales. The overall income between Surface RT and Surface Pro, the first piece of Surface hardware that ran regular Windows 8, produced just $853 million in revenue for the company. Despite the devastating financial impact around the launch of the first two Surface hardware devices, the company said they would continue to design and release new hardware.

The next generation of Surface devices, the Surface 2 (a Windows 8 RT-based device) and Surface Pro 2 (x86-based) were launched in the Fall of 2013. This would be Microsoft’s last venture into the ARM market for a Windows-based device because the confusion around the capabilities of Windows 8 RT continued.

Eventually, the devices were sold at a huge discount to clear out the remaining inventory. As for Surface Pro 2, this new update improved upon the hardware and performance of its predecessor and was quite popular – and set the stage for an iterative style of hardware improvements with each successive generation of Surface devices hitting the market.

On May 20, 2014, Microsoft unveiled a third generation Surface Pro 3 as expected – but the company did not roll out a then-rumored smaller form-factor device. Microsoft CEO Satya Nadella and then-Microsoft Devices Group Head Stephen Elop decided just a few weeks before the May event that Surface Mini was not differentiated enough to launch into market. It never shipped but images of the tablet, which had been produced for internal testing, did surface in 2017. The cancellation of the device showed a new willingness at Microsoft to avoid the sunk-cost fallacy as a business principle.

Moving forward through its Microsoft Surface release cycle, the company would continue to regularly iterate on the Surface Pro style devices through multiple generations. They would also launch Surface-branded and -designed peripherals alongside of two generations of Surface Studio and Surface Hub, plus introduce Surface Book and Surface Laptop.

At the October 2019 Microsoft Event in New York City, the company debuted its next unique form factor for Surface hardware. The company launched enterprise-friendly updates of new Surface hardware and refreshes as expected. However, they opted to give an early preview of two upcoming dual-screen devices. The first, Surface Neo, would run an upcoming variation of Windows called Windows 10X for dual screen devices and a smaller mobile device called Surface Duo running Google’s Android operating system.

These previews caught everyone off guard at the event because they were unprecedented in the history of Microsoft Surface devices – these products were still at least a year away from launching and it is not Microsoft's style to get this far ahead of a hardware announcement. The devices were met with a varied response from media companies and enthusiasts but also generated some excitement. There was also some reminiscing about the never-launched Surface Mini hardware.

After a February 2020 developer event focused on Windows 10X, Surface Neo and dual-screened devices, everything around this unique approach to dual-screen devices seemed to be settling in for continued development toward their launch in the 2020 holiday season.

Then we get another very public example of Microsoft’s willingness to not be afraid of the sunk cost fallacy for money already spent on development and testing of hardware.

This most recent shift means no Surface Neo dual-screened device will launch before the end of 2020. Panay did indicate the company would continue to “look for the right moment, in conjunctions with our OEM partners, to bring dual-screen devices to market.” The enterprise may drive when that right moment is.

Microsoft extended their Surface branding to peripheral hardware like keyboards, mice, headphones, earbuds, and a desktop computer. More importantly, Microsoft has used the Surface line to learn how to adjust their plans in response to industry conditions and global situations. This latest announcement only confirms that Microsoft’s been able to keep climbing a very steep learning curve with regards to its Microsoft Surface release cycle.