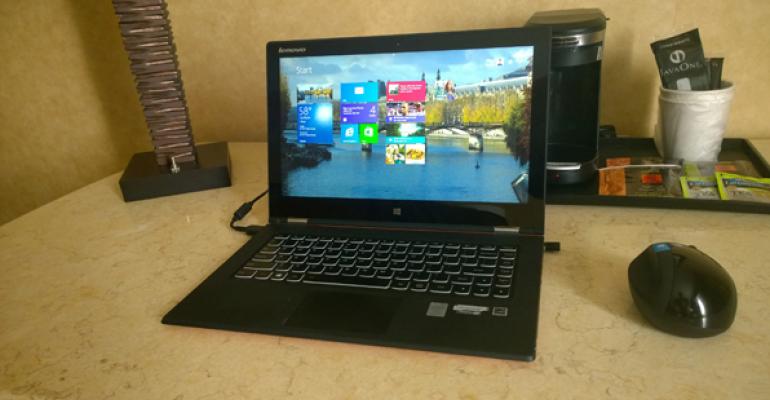 A more versatile take on the Ultrabook

If you're turned off by the all-business persona and lofty price of the ThinkPad X1 Carbon, no worries: Lenovo offers the stylish and innovative Yoga 2 Pro as an intriguing alternative. This device is more consumer/prosumer than business, and in addition to multi-touch capabilities, it offers a stunning, super-high-res screen that can be oriented in a variety of ways, transforming the usual into something quite versatile.

I recently declared that the Lenovo ThinkPad X1 Carbon is the best Ultrabook I've ever used. By way of comparison, I'll describe the Yoga 2 Pro as the best "2-in-1," or transforming PC—it's really a "4-in-1" PC—that I've ever used. Putting this device head-to-head against its X1 Carbon stable mate, it's a photo finish, and depending on your needs and preferences, I could see many opting for the Yoga 2 Pro instead. They are both absolutely first class PCs.

Before proceeding, please make sure you've read my Lenovo IdeaPad Yoga 2 Pro First Impressions and Photos. This review of course updates my initial impressions based on months of real-world usage.

The most obvious and striking thing about the Yoga 2 Pro, at least for my review model, is the colorful "tangerine" exterior, a color I happen to like quite a bit. I could see it turning some people off—no worries, plain black and dull gray are available for the less outgoing—but were I buying this machine, this is the color I'd choose. It screams personality.

The Yoga 2 Pro and X1 Carbon weigh almost exactly the same—3 pounds—but the Yoga 2 Pro packs a 13-inch screen while the X1 has a bigger 14-inch unit, and the Yoga 2 Pro is a bit thicker. Carrying it around in a bag, however, the profile is similar. And in carting this device back and forth to New York, Phoenix, Vermont, and into Boston by virtually every mainstream form of travel available, I found the Yoga 2 Pro to be just as good a travel companion as the X1 Carbon. It takes up little space and isn't heavy to carry.

When you open the device's lid, the differences are similarly subtle. I had expected the 13-inch screen on the Yoga 2 Pro to be problematic, given my predilection for unusual 15-inch Ultrabooks. But possibly since I've been spending much of the past two months going back and forth between this device and the X1, I find the screen size perfectly workable. And switching between the X1 and Yoga 2 Pro has been seamless from a usage perspective.

That is true, in part, because the Yoga 2 Pro exhibits the same pros and cons when it comes to its screen. As with the X1, the Yoga 2 Pro's screen is very bright and glossy—this is apparently what people expect these days, so Lenovo delivers—and it comes with an incredible, Retina display-busting 3200 x 1800 resolution, even higher than the X1's 2560 x 1400. But as with the X1, after futzing with various settings and trying to deal with the fact that some of the desktop applications I use regularly—I'm looking at you, Adobe Photoshop—simply do not work properly at such high resolutions, I've done here what I did to the X1: I've bumped the resolution down, manually, to 1600 x 900.

To me, this is optimal, and a good resolution for a screen of this size. Others may disagree. But what this boils down to is that I spend most of my time in the desktop. And super-high-res simply doesn't work in that environment if you run certain poorly-written applications regularly as I do. Were I to stick to Windows 8.1's "Modern" environment, this wouldn't be an issue. Likewise, if you use well-written desktop applications exclusively, you'll find that the Yoga 2 Pro's screen is best in class, and that the desktop scaling functionality works just fine. In fact, better than fine: The text on onscreen controls is so crisp it looks fake.

Battery life is impressive and is roughly on par with that of the X1 Carbon. I routinely get 7 or more hours of life, and it withstands cross-country flights and long train rides with ease, using my typical combination of work (writing, image processing) and entertainment (videos).

And thanks to its transforming screen, the Yoga 2 Pro is an even better travel companion than the X1. If you're stuck in steerage on a long flight with the seat in front of you jacked back as far as it can go, you can flip the screen around and watch videos in stand mode. Or flip the screen all the way over and use it like a (large and heavy) tablet. This kind of versatility isn't typically required day-to-day but you will appreciate it, and then some, when you need it.

Performance was always excellent. Lenovo packed an Intel Core i7-5400U, 8 GB of RAM, and a large 256 GB SSD into my review unit, and it never skipped a beat. Frankly, that's probably overkill for many, but it's also good from a future-proofing perspective. You'll get your money's-worth from this not inconsiderable investment.

The expansion story is mixed. The Yoga 2 Pro features one USB 3.0 port on the left, and one USB 2.0 port (which can charge devices while the Yoga 2 Pro is off) on the right; why this can't be two USB 3.0 ports is unclear. It also includes a full-sized SD/MMC port (lacking on the X1 Carbon, by the way) and micro-HDMI out. But there's no Ethernet option, so you'll need to get an adapter and eat up a USB port. I did like that it had a power button and volume buttons on the outside edge—so they can be used in any mode. Some will find the power button placement odd—it's very close to the front of the machine—but you get used to it.

The backlit keyboard is superb. I was originally worried about the glossy/slippery nature of the keys, but I adapted quickly and find it quite comfortable. It features none of the weirdness of the X1 keyboard—there's no silly "adaptive function row," just normal keys, thank you very much, and no weird key placements—and has a dedicated Print Screen button. Love it.

Less positive is the trackpad, which is actually thankfully small in these days of SUV-sized pads, but annoyingly capable of picking up palm hits while I'm typing. I spent an inordinate amount of time futzing with the trackpad utility, and came up empty: There is no way to turn it off when there is a mouse connected, which is necessary since the Yoga 2 Pro doesn't feature the X1's excellent "nubbin" pointer alternative. And I couldn't stop it from picking up my palm, no matter how I configured it. As I write this review, the insertion point occasionally jumps to some other point in the text because this terrible trackpad thinks I'm moving it on purpose.

Speaking of disappointment, Lenovo bundles an unnecessary amount of crapware with this device. I'm most alarmed by the number of items that run automatically every time you sign in: Lenovo energy manager, utility, phone companion, transition, picks and other software are all vying for the PC's precious resources, and I have never once wanted or needed any of them. As bad are the useless anti-virus and system checkup utilities and other pointless apps. The PC is just full of crap.

Lenovo used to show amazing restraint in this area, but it's pretty clear that the firm is responding to its new perch atop the PC market as did its predecessors, and it's trying to milk every dollar it can from each machine it delivers to customers. This is a mistake. It's easy enough to remove this stuff, but not so easy for the average person to understand what's needed and what isn't.

Ultimately, however, the device's style and form factor utility outweigh the niggling bits. Where the Yoga 2 Pro excels is in its multiple usage possibilities, and while it is absolutely an Ultrabook first, its ability to transform really does set it apart. And that I'm even comparing this device head-to-head with the ThinkPad X1 Carbon is telling: this is a truly versatile machine.

It's not cheap. As reviewed, the Lenovo Yoga 2 Pro will set you back $1400, about $400 less than the X1 Carbon I reviewed but still quite expensive. But this is a premium product: It's well-made, durably constructed, and thoughtfully designed.

If that's too expensive for you—understandable—I'll be reviewing the more moderately priced Yoga 2 (non Pro) soon. For now, I can say that the Yoga 2 Pro and ThinkPad X1 Carbon sit in a rarefied place at the top of the portable PC market, each addressing slightly different needs and wants. It's highly recommended, despite the balky trackpad.