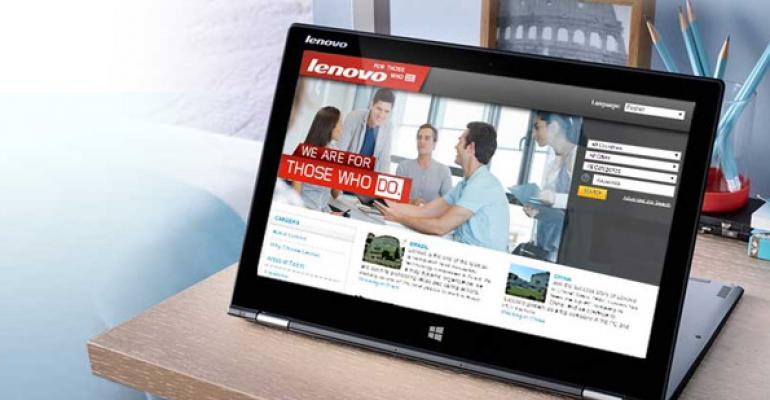 Less reliance on the home market

As with other industry titans such as Microsoft and Intel, Lenovo continues to drive strong growth despite disruptive market forces. The world's biggest maker of PCs posted solid profit and revenue gains in the most recent quarter, and did so during an ongoing transition to diversify its product lineup and expand beyond the "hyper-growth" of its home market of China.

"Lenovo saw excellent market share gains and profit expansion," Lenovo chairman and CEO Yuanqing Yang said of the most recent quarter, in a prepared statement. "Not only did we reach nearly 20 percent share in PCs, but we became number one in the broader PC plus tablet market for the first time. And in the last month, we successfully closed both our Motorola Mobility and IBM x86 [server] acquisitions. With these two deals, we are now number three in both businesses, but we are not satisfied. We will replicate our success in PCs by outgrowing the market to challenge the top two."

Lenovo posted a profit of $262 million on revenues of $10.5 billion in the quarter ending September 30. Both were improvements over the same quarter a year ago, with profits a particular bright spot, and up by 19 percent. And despite supposed problems with the PC industry—it's pretty clear the dark days are in fact over—Lenovo's PC market share actually made an 11 percent gain in the quarter as well. PCs constitute over 50 percent of Lenovo's revenues.

Smart phone sales grew 38 percent in the quarter as well, to 17 million units, making Lenovo the number four smart phone maker in the world. "In China, the smartphone business remained robust, while demand outside China was even stronger," the firm noted.

Despite the gains, Lenovo issued a cautionary note about the future.

Yang said Thursday that the China market is "saturated" and "not hyper-growing any longer," and that the firm needs to find new growth areas, geographically. And it has done so in some areas: Sales of the firm's smart phones grew 400 percent in markets like Europe, the Middle East and Africa. But there's plenty of room for growth elsewhere, too. Despite being the number one PC maker in the world, sales of Lenovo PCs in the United States are less than those of both HP and Dell. And the firm doesn't sell smart phones the US yet either.

As for its product lines, Lenovo has been plotting a transition from a PC-only product base to a more diversified portfolio that includes smart phones, tablets, and business products like servers.

"Mobile and Enterprise are now our new growth engines," Mr. Yang said, "and over time, like PCs, they will become our profit pool as well."

And Lenovo isn't afraid to spend to get ahead. It paid $2.9 billion to acquire Motorola Mobility's handset business from Google, and $2.1 billion to purchase IBM's entry-level server business. (Lenovo had previously purchased IBM's PC business, including ThinkPad, in 2005.) Both purchases were finalized in the previous quarter.