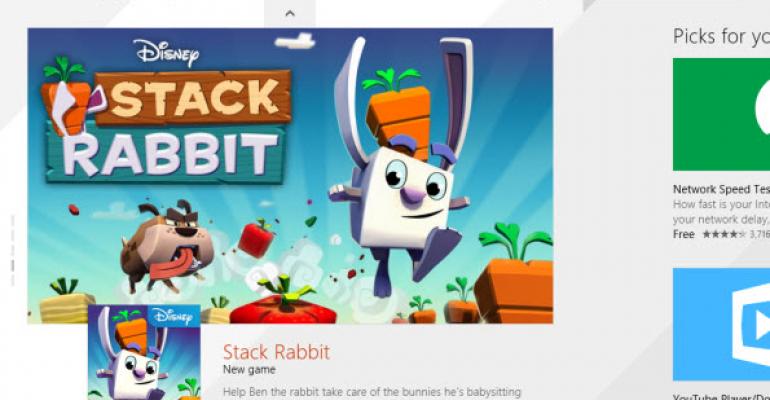 The Windows Store, introduced in Windows 8 and modified a bit in Windows 8.1, is a great solution to locate new apps, but it is sometimes a bit buggy. I've noticed on several occasions where the contents of the Windows Store will display differently on different devices. For example, the New and Trending list on my Lenovo Tablet 2 will be completely different than the list on my Microsoft Surface Pro. There's a couple reasons for this, but primarily have to do with how the app caches its information and how often it syncs with the Microsoft mothership.

Here's a look at the options you can try when it seems the Windows Store app may not be working correctly.

To access the first two options, open the Windows Store app, swipe from the right (open the Settings menu) and choose the App Updates menu option as shown below.

If I haven't seen any new app updates for a while, without fail I can run the Check for updates routine and the app will find at least one or two apps that need updated. As shown below, just tap or click the Check for updates button to cause the Windows Store app to manually check for app updates. The process takes less than 5 minutes, most times.

Sometimes, particularly if you use multiple devices running Windows 8 or Windows 8.1, you can go between the devices and your personal apps list doesn't match. For some reason your app licenses have either not synched to Microsoft, or they have not synched down to the additional device. You might even be presented with a message indicating that "you haven't purchase the app" even though you know you own it.

This is a situation where you app licenses are out of synch. To fix this, tap or click the Sync licenses option on the App updates screen. An app license sync takes less than 5 minutes.

If manually looking for app updates or synching licenses doesn't work for your particularly Windows Store app issue, there's one last thing you can try.

Located in the C:\Windows\System32 directory on a Windows 8 or Windows 8.1 computer or device is a file called WSReset.exe. WSReset.exe is a troubleshooting tool designed to reset the Windows Store without changing account settings or deleting installed apps. Simply put, this executable clears the Windows Store cache.

You can run WSReset.exe from the Run command (accessed by right-clicking on the Windows 8.1 Start button)…

…by typing WSReset.exe into the Windows 8.x Search…

…or by navigating through Windows Explorer and running it from the C:\Windows\System32 directory.