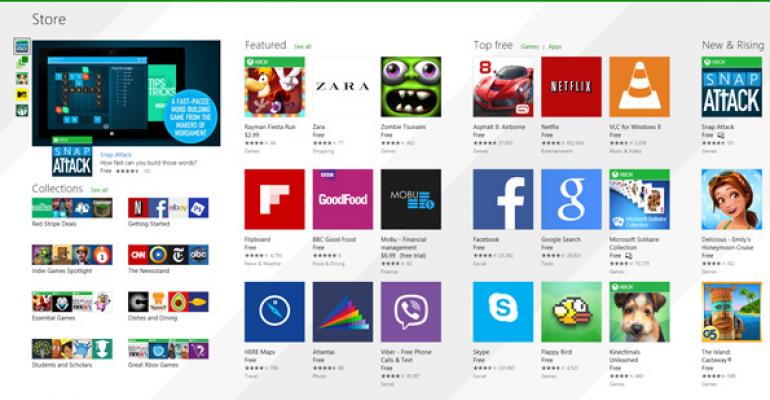 Now that Windows 8.1 Update 1 is broadly deployed, Microsoft is starting to update the key apps in the OS to accommodate friendlier new mouse- and keyboard-based UIs. Next up is the Windows Store app, which is getting a major update that looks great no matter what kind of Windows device you use.

Microsoft previously updated the Windows Store app for Windows 8.1. As you might imagine, given its usage, this is one app that Microsoft doesn't tinker with lightly. But this is a big change. In fact, it's fair to say that it's completely different. Not only is the navigation more obvious, but the whole layout of the app has changed.

The Store app is updated through Windows Update. So check for updates today if you're using Windows 8.1 with Update 1 (it is Patch Tuesday, after all), and the Store update will be among the updates you're offered.

New features in the latest version of the Windows 8.1 Store app include:

Always-visible navigation bar. Graphically and functionally, this new toolbar-like UI at the top of the app really grounds the presentation and makes navigation much easier, no matter how you use your PC or device. In previous versions of the Store app, navigation was hidden, which, as I've pointed out often enough, is not good UI.

Collections group in the Store hub view. You can now access the curated app collections—like Getting Started, Better Together, Red Stripe Deals and Music Lovers—directly from the Store app's hub view.

Linked apps. Linked apps—apps that are available for both Windows and Windows Phone—can now be licensed across devices. So if you buy or download a linked app on one platform, it's added to your collection on the other and is readily available. You will see the following icon next to linked apps going forward (this is true in Windows Phone 8.1 Store app as well.)