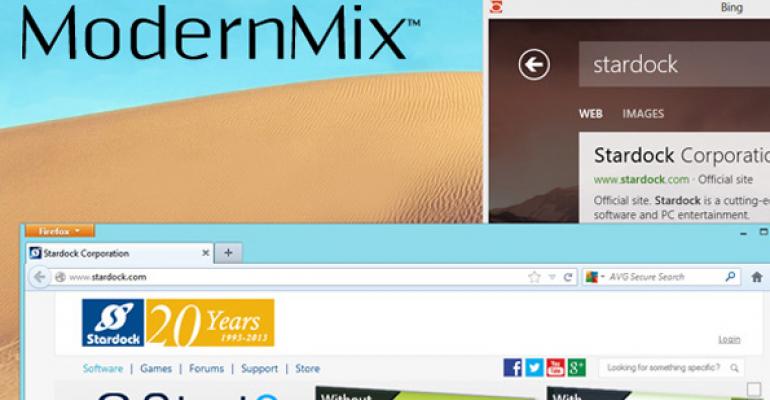 Windows 8 Tip: Run Metro Apps in Windows on the Desktop

Windows utility maker Stardock has released an amazing application that lets you run Windows 8 “Metro” apps in a window alongside traditional Windows applications. It’s not free, but if you use Windows 8 on a desktop PC as I do, this might be the best $5 you ever spend.

Stardock’s ModernMix is available now in beta form. There’s a 30-day trial so you can check it out, and if you do decide to buy, the price is just $5.

Here’s what you get.

Windowed Metro apps. As you know, Metro apps can only be run full-screen or in the Snap pane in the Metro environment. But ModernMix provides the interface I asked for over a year ago, the ability to run Metro apps in windows alongside traditional desktop applications.

Pin to taskbar. Now you can pin Metro apps to the taskbar too!

ModernMix menu. A small ModernMix menu in the top right corner of Metro app windows lets you toggle back to full-screen if desired … And vice versa! Just mouse over it and make your choice.

Remember settings. You can resize and position Metro app windows and ModernMix will retain those settings the next time you run the app.

As you may know, I’m not generally a fan of contorting the Windows 8 user interface to make it more like classic Windows versions. But if you are using Windows 8 on a traditional desktop computer or laptop, this makes a ton of sense. I’ve bought it. You should at least take a look.