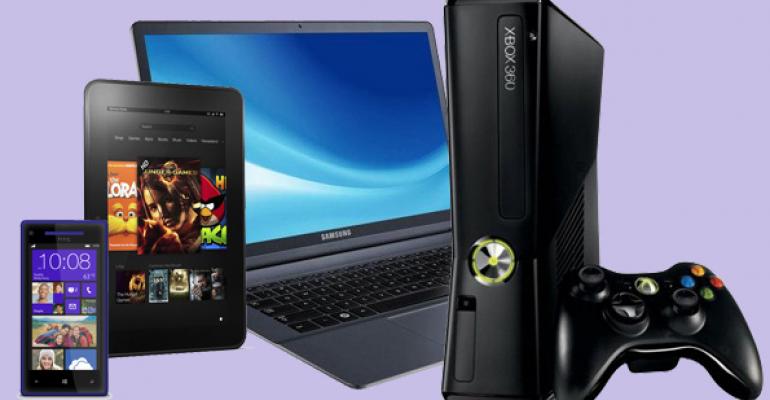 What I Use: Digital Ecosystems

There cannot be only one

On a recent episode of the What The Tech podcast, Andrew Zarian and I discussed the ongoing move to the cloud and away from local, PC-based data storage. I coined the term “zero data” during this discussion as a way to describe the goal of ensuring that the master copy of all data is stored in the cloud and not on a single device that could be lost, stolen, or otherwise incapacitated. But this is isn’t anything new, really, and my use of various online services has evolved in 2012 and will continue to do so.

I spend a lot of time investigating digital ecosystems, trying to establish which make the most sense. I do this for myself, of course, but also with an eye on Windows users and how they can best transition to this new way of doing things. But despite an amazing range of high quality choices, there are few obvious answers. And things are changing all the time, leading to an ever-shifting strategy.

I most recently wrote about this topic in When Shopping Tablets, Buy Into Ecosystems, Not Into Devices. But this is an issue that has taken up a lot of my time this year. After deciding to begin removing Apple devices from my home earlier in the year and move towards Microsoft’s ecosystem services, the software giant has begun rolling out its horrible Xbox entertainment services. This has triggered some serious rethinking, that’s for sure.

What I’ve arrived at—and it’s important to note, yes, this will probably change as these services mature and evolve over time—is that I will not personally be using a single ecosystem for everything or even most of everything. That is, while I had expected to move almost entirely to Microsoft services at some point in 2012, recent developments, especially the horrible Xbox Music stuff, have halted those plans.

What I’m doing here is providing a peek into my thinking at this time and at the ecosystem services I’ve chosen … for now.

This one is the rare no-brainer as far as I’m concerned. The alternatives—Apple iBooks, Barnes & Noble Nook, and Google Play Books—are all completely uninteresting to me for various reasons. But the big advantages of Kindle are that it’s from Amazon (whom I trust and already have a well-established customer relationship with) and that it is available on the broadest range of devices. I can read Kindle books virtually anywhere at any time.

I’ve purchased and downloaded numerous mobile apps on iOS (iPhone/iPod touch/iPad), Android (Google Play and Amazon Appstore), and Windows Phone, and have even purchased a handful of Windows 8 “Metro” apps. There’s no clear winner here, for me.

Obviously, I use Windows Phone, but my use of apps is minimal. Not because there aren’t any, but because I just don’t care much about apps and because Windows Phone includes enough integrated experiences that the base OS pretty much does most of what I want on the go.

And while I use an Amazon Kindle Fire HD as my primary media tablet, I couldn’t care less about apps on that device. I use it for content, period. Just my preference.

My choice(s): Xbox 360
Possible alternatives: None

While I understand the argument for PC gaming, I’m not interested. And from a personal preference perspective, the notion of leaving games off of PCs, which are for work, maps nicely to my similar decision to leave entertainment (music, videos) off of PCs as well.

At $99 per year, Xbox Music Pass isn’t cheap, but it works where I want it to work, which is Windows Phone (on the go) and Xbox 360 (living room) and has the advantage of downloadable songs for offline use. I like that when a new album comes out I can just download it to the phone and see if it’s any good in my own time. And if this service comes to iOS and Android, as expected, it could enter no-brainer territory.

That said, it hasn’t yet. And this is a good example where different device usage could change the picture dramatically. I have used Pandora and Spotify quite a bit, for example, and both are very good. And if Apple does release an iRadio as expected—and, as important, allow true streaming of your own collection via iTunes Match—that would instantly become a tier-one choice too.

There’s no reason to restrict yourself to certain services when it comes to buying music since it is all compatible everywhere. But because I do use Amazon Cloud Player (below), buying music from Amazon Mp3 is a convenience: I don’t need to upload/match it manually. That said, I buy music from any of the big services. It doesn’t matter.

I’ve had great success with Amazon Cloud Player, and it did a great job of importing my entire iTunes collection to the cloud, including playlists. And I like that Amazon MP3 purchases go directly into the Player, and don’t need to be downloaded. The web-client is great for Windows, and Amazon has nice native clients for Android and iPhone, but not iPad or Windows Phone. Adding a Windows Phone client would push this service into no-brainer territory for me. But it’s still pretty close.

I prefer Cloud Player to Google Play Music because it matches music. And Google will never deliver an iOS client (why would they?) so Amazon’s offering is a better bet for the future since it’s more broadly available across device types. (Apple’s iTunes Match is also excellent, but you will never see an Android or, for that matter, a Metro client either.)

I could have split this into a few different categories, I guess (Photos: Mobile, Photos: Collection). But I’m midstream on changing how I do things here. For years, I used Amazon S3 backup (automatic) and Google Picasaweb (now Google+, manual) for my photo collection and whatever phone-based automatic cloud backup (SkyDrive on Windows Phone, Google+ on Android, iCloud/Photostream on iPhone). Today, my photo collection is automatically backed up to Crashplan as part of my home server backup (see below). And because I use Windows Phone 8, my handset photos are automatically backed up to SkyDrive in full resolution.

I’d still like to get my entire photo collection into a place that makes sense for sharing, or just for random photo slideshows on the TV. I’ll be looking into this in the New Year.

I will be uploading my old home movies to YouTube, marking them as private, and will finally get rid of the original tapes and local copies. I don’t know why I haven’t done this yet.

Movie rentals are easy: Just rent movies for the devices you’re using. In my case, this occurs in two places, at home and on the road. At home, we have an Xbox 360, a Roku device, and an Apple TV connected to our TV, and of course on demand through FIOS, so our choices are varied. On the road, I generally bring an Amazon Kindle Fire HD with me, so I rent from Amazon. This one doesn’t matter very much as these videos are temporary.

Netflix is pretty much the kind of this market and we use it fairly frequently. We occasionally dip into Amazon Prime Video because we get it for free but it’s not quite there yet.

I don’t generally recommend buying movies online: They’re expensive and are tightly tied to the ecosystem, offering mixed compatibility across devices in most cases. But when I do actually buy movies, rarely, it’s generally from Amazon or Apple, and always in HD. Google Play is a non-starter: HD is available only on Android devices.

TV shows are a bit different. I tend to buy TV shows when I miss episodes on TV or when I’m catching up on an entire season and it just makes more sense to purchase. (I did this recently with Homeland Season 1, for example.) But unlike movies I’d purchase, I’ll usually watch most TV shows just once. So the source is a bit less important. It just depends on where you want to watch it.

My choice(s): Audible
Possible alternatives: None

As with eBooks, this one is a no-brainer and with increased interoperability with Kindle eBooks—through Whispersync, which lets you switch back and forth between the audio book and eBook versions of many titles—it’s getting better all the time. Audible (which is part of Amazon) has wisely switched to using native mobile apps, and I listen in via Windows Phone.

I listen to podcasts pretty exclusively on Windows Phone, and since I live in the US, the native, built-in podcasting support in the Music + Videos app does the trick.

My choice(s): iTunes U, some manual downloads
Possible alternatives: None

Apple makes it pretty hard to leave their digital media ecosystem and while we can debate their strategy, at least one piece of it is unassailable: iTunes U is awesome and there is nothing like it anywhere else. This service provides free, college-level courses, and while the experience can be better in some ways on iOS devices because of a great mobile app, the videos and course materials work well on PCs as well. Whatever you want to learn—history, a foreign language, how to develop iOS apps, whatever—is pretty much represented. It’s an astonishing resource.

Of course, not everything I want to learn is taught in a college classroom. So I download many videos online, especially Microsoft videos for Windows 8 and Windows Phone 8 software development, and watch them via my PCs or mobile devices.

I use SkyDrive because it works well for what I need, and it provides a nice, consistent experience between my PCs and a way to access critical files from virtually any device type. There is a SkyDrive mobile app for Windows 8/RT, Android, and iPhone/iPad, and of course the desktop sync application for Windows.

My choice(s): Crashplan
Possible alternatives: Carbonite, many others

I use Crashplan because it’s inexpensive ($60 per year with no storage limit). It’s slow to upload and I’ve never actually had to restore data from the service so I’m careful to make sure my most critical data is elsewhere too. But … I’ll keep looking. This area is far from mature.

There are different ways to approach cloud storage. Separating work from play makes some sense. But so does the notion of “work set” vs. “deep storage”: There is data you want to access frequently and data you will not access that much at all, if ever. For example, today I use SkyDrive for work in progress (ongoing articles and article series) and a home server (running Windows Server 2012 Essentials) for ongoing storage. But maybe a cloud service makes more sense than the server. Why do I need that stuff locally? (Maybe Microsoft could make a Windows Azure Essentials service. Hm.)

Regarding entertainment, you can probably understand why a successful and truly useful set of Xbox-branded entertainment services could have—could still be—a big deal. Today, those services—Xbox Music and Video—are pretty terrible, especially the music bit, but also how things just don’t work properly on Windows 8 and RT devices. The whole thing is a mess, and it’s driven me to continue using other services, many listed above.

Whatever happens, 2013 is going to be interesting. I bet a lot of this changes yet again.