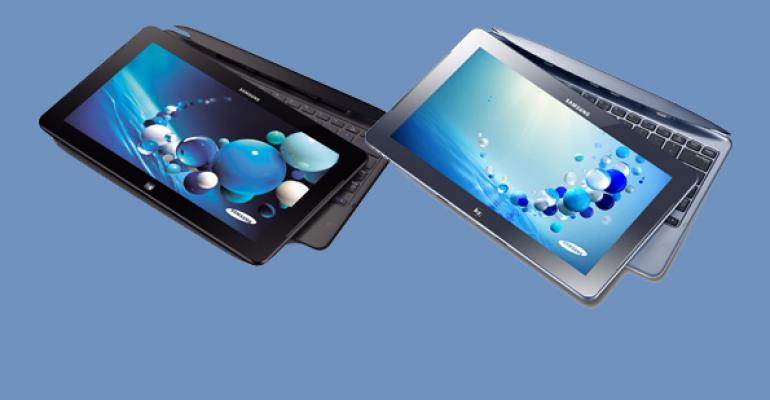 Two Windows 8 hybrid devices go mano-a-mano, or tableto-a-tableto, or something

While I don’t yet have a Surface Pro, I do have two nearly identical new Windows 8 devices on hand, a Samsung ATIV Smart PC 500T and a Samsung ATIV Smart PC Pro 700T, making for an interesting comparison. The first is based on Intel’s new Atom “Clover Trail” chipset, which competes with ARM at the low-end of the market, while the second is built around a standard Intel Core i5 “Ivy Bridge” chipset. Which makes more sense?

This comparison is pretty timely because the 500T (Atom) and 700T (Core i5) are just as similar to each other, from a form factor/hardware perspective, as are the Surface RT (ARM) and Surface Pro (Core i5). And because the processor in the 700T, a 1.8 GHz i5-3427U, is so similar to that in the Surface Pro—a 1.7 GHz Intel Core i5-3317U processor, as I exclusively revealed in Microsoft Surface with Windows 8 Pro Preview—this machine provides an interesting preview of what to expect from Microsoft’s next tablet, especially from a battery life perspective. (Though to be fair, that article linked above also exclusively reveals what to expect there, too.)

You can compare the two devices online via the Samsung sites for the ATIV Smart PC 500T and ATIV Smart PC Pro 700T. Excluding minor, non-functional differences—the 500T casing is medium gray while the 700T is black—the big differences are:

Chipsets. As noted above, the 500T features an Intel Atom processor Z2760 while the 700T utilizes an Intel Core i5-3317U processor. But because these are both Intel parts, both can run both Metro apps and standard desktop applications: None of the compatibility issues present with ARM/Windows RT—including not just those vital desktop applications but also browser plug-ins and hardware drivers—are a problem, though of course you’re going to get much better performance from the 700T and much better battery life from the 500T. Interesting tradeoff.

RAM. The 500T’s woefully 32-bit Atom chipset is limited to 2 GB of RAM, but the 700T comes stocked with a far more acceptable (but non-expandable) 4 GB of RAM, most of which is available thanks to the use of Windows 8 Pro 64-bit. A bit of RAM is given to the integrated graphics on both systems.

Display. The 500T comes with a 1366 x 768 display, while the 700T—like the Surface Pro—delivers a full HD 1920 x 1080 display. Otherwise, the displays are identical: They’re both 11.6 inches in size, and provide a bright 400 nits of light. Looking at the Start screens of each device, I can’t tell them apart, thanks to the pseudo resolution independence of Metro; each provides three rows of tiles and look identical. (The desktop, of course is a different story.)

Connectivity. Both devices feature 802.11 wireless networking of every kind imaginable, Bluetooth 4.0, and Gigabit Ethernet. But the 700T, intriguingly, also supports Intel WiDi. I’ve gotten a lot of reader questions about whether Surface Pro supports this feature but haven’t been able to confirm this yet.

Connectivity. Both devices sport many of the same ports: micro HDMI, one USB (USB 2.0 on the 500T; USB 3.0 on the 700T), headphone/MIC out combo, micro-SD, and identical docking connectors. The keyboard docks for each are identical, with two USB 2.0 ports and no battery.

Form factor. Here, we see another interesting difference that is mirrored by the Surface devices: While the 500T and 700T look identical at first blush, there are in fact some subtle differences. The 700T is decidedly heavier—1.9 pounds vs. 1.65 pounds—which mirrors the weight difference between the Surface Pro and RT (2 pounds vs. 1.5 pounds). It’s also thicker--.5 inches vs. .38 inches—with the height and width being identical; this too mirrors the Surface Pro (.53 inches) and Surface RT (.37 inches) very closely. And while all the same ports are available on the top of each device, the positioning is a bit different, and the 700T sports an off-center rear camera and, more tellingly, a fan vent that is missing (because it’s unnecessary) on the 500T.

Fan noise/heat. And that brings us to the crux of the matter. Where the 500T is both silent and stone-cold, the 700T has a fan that kicks in like those on many laptops, delivering a low but near-constant hum in regular use. The 700T also runs warm: It’s not “hot,” but you can feel the difference in temperature when compared to the 500T. Microsoft’s Surface Pro, of course, uses a very unique cooling system with vents, so I remain curious about whether that actually works over time. We’ll see.

The 700T, bottom, has a big vent so that the fans can blow heat out of the device

Battery life. When I reviewed the Samsung ATIV Smart PC 500T, I was blown away by real-world battery life of over 9 hours, which exceeds even that of the Surface RT. The 700T, alas, delivers between 5 and 6 hours of battery life in real world use. I will be testing this more in the next few days, including playing the same videos side by side on both machines. But it appears that the 700T delivers slightly better battery life than the Surface Pro, albeit in a larger, more plastic form factor.

Price. Both of these devices are overpriced in my opinion. The Samsung ATIV Smart PC Pro 700T costs $1200 at the Microsoft Store, while the Samsung ATIV Smart PC 500T costs $750. (The latter can also be purchased with a keyboard dock, which I do not recommend.) Compare these prices to a 128 GB Surface Pro with Type Cover ($1129) and a 64 GB Surface RT with Touch Cover ($699), both of which are also over-priced, I think, but cost a bit less. (That Surface device would cost $819 with a Type Cover, however.)

Ultimately, both of these devices are actually pretty good. Not ideal, but decent. With the 500T, you get stellar battery life and compatibility with all of the Windows software and hardware you own, albeit with netbook-class performance. The 700T, meanwhile, delivers a no compromises Windows software experience but at the expense of battery life and a much higher cost. Taken together, these devices nicely represent the trade-offs that users face when comparing modern Windows devices, assuming of course you’re willing to leave Windows RT/ARM out of the equation (which I would).

So. Which is “better”? And how does this comparison color a coming comparison with Surface Pro?