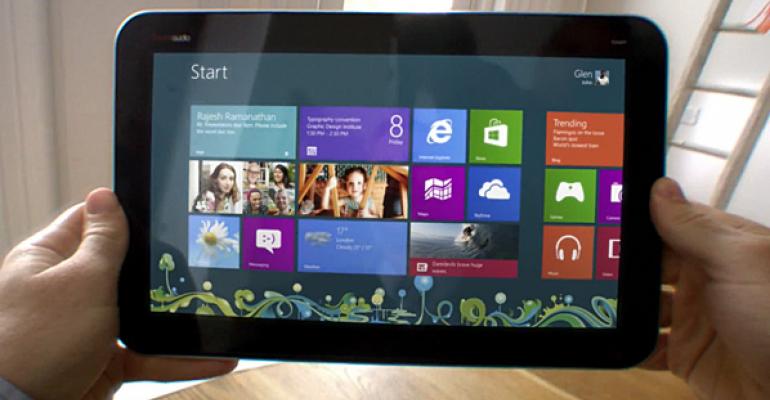 Surprise: Windows 8 stole market share from both Android and iPad

According to a report issued this week from Strategic Analytics, Windows 8 has already secured 7.5 percent of the tablet market, despite lackluster reviews and a paucity of high quality devices. This suggests that the market for Windows tablets is far stronger than many critics would have you believe.

The firm claims that total tablet shipments reached 40.6 million units in the first quarter of 2013. Apple’s iPad continues slipping, but remains the number one tablet platform overall, with 48 percent market share. But Google’s Android is nipping at Apple’s heels with 43 percent of the market and will overtake iPad as soon as this quarter.

Of particular interest to me, and to readers of this site, of course, is Strategic Analytics’ take on Windows: The firm claims that hardware makers sold 7.5 percent of all tablet sales, or 3 million units, in the first quarter of 2013, good for a (very distant) third place finish. Strategic Analytics called this share “a niche” and noted that Windows 8 was hampered by “very limited distribution, a shortage of top tier apps, and confusion in the market.” (I’ll try to avoid comparisons to Mac market share. Wait, no I won’t.)

I’m actually pretty (positively) surprised by this figure given the lackluster nature of the available hardware. In fact, I think this is the single most interesting trend in the report, since we already knew that iPad dominance of the market was over (it’s below 50 percent market share now and owned 63 percent of the market as recently as Q4 2012) and that Android was on the upswing.

I would also point out that Windows 8’s gains came at least partially at the expense of both Android and iPad, and not from the nebulous “other” category. Windows 8 tablets are actually taking market share from Android and iPad already. Seriously, that’s pretty amazing.

Mission accomplished? Hardly. But one has to wonder how well Windows can perform in this market when both the software and hardware matures. I’m curious to see where things start to plateau down the road.