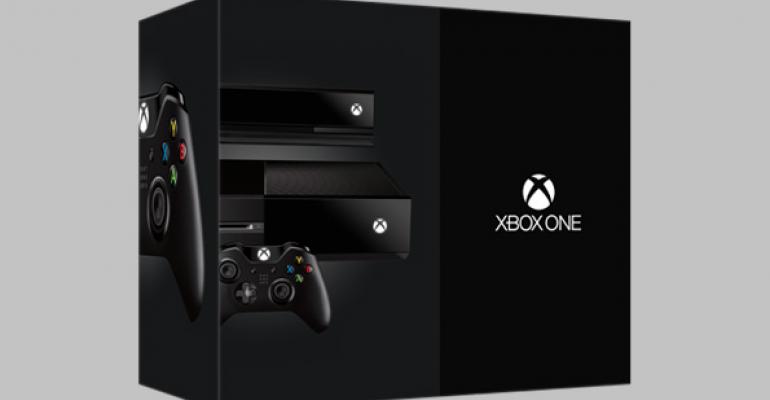 At its annual E3 press conference, Microsoft revealed Xbox One pricing, a special Day One console version, new features coming to Xbox LIVE, and a selection of the games that will be made available during the product launch in November.

You may recall that I previously and exclusively revealed that Microsoft would launch the Xbox One in November at a price point of $499. Microsoft today confirmed both of these facts. (The firm originally planned to ship a second version of the console for $399 that would require a two year Xbox LIVE Gold commitment at $15 per month. Those plans were later scuttled.)

Beyond that, there’s a lot going on. Here’s what they announced today:

Xbox One Day One edition

The Day One edition also comes with special bonus content for some of the launch games described below: Ryse: Son of Rome (exclusive multiplayer map and sword with bonus attributes), Forza Motorsport 5 (access to four cars tuned to the top of their class), Kinect Sports Rivals (exclusive sporting equipment that separates your Champion from the rest of the world), and Dead Rising 3 (exclusive Frank West and Chuck Greene Tribute Packs with bonus attributes).

You can preorder the Xbox One Day One edition from Amazon.com and other participating retailers.

Xbox LIVE Gold for families. After killing the Xbox LIVE Gold Family Pack earlier this year, Microsoft will expand the existing Xbox LIVE Gold subscription for individuals to include “anyone in your home” at no additional cost. The price isn’t changing, so this is a tremendous deal. (Within the confines of Microsoft still requiring a paid subscription.)

Cloud features. Finally owning up to the fact that the Xbox LIVE backend indeed utilizes Microsoft’s powerful Azure cloud services, Microsoft is now explaining how this will fundamentally change your Xbox One user experience. All of your games and entertainment content will be stored and saved on Xbox Live, so you can access them anytime from any Xbox One console. Xbox One will always be up-to-date and ready when you are, thanks to background updating. Developers can take advantage of “the 300,000 servers backing Xbox LIVE” starting this fall.

Gamerscore. Yes, your hard-earned Gamerscore will carry over from the Xbox 360, which makes sense as it’s tied to your Xbox account, not the console.

Smart Match. Where Xbox LIVE supports matchmaking today, Xbox One will improve on that with Smart Match, which will match players based on skill, language and reputation. Asynchronous matchmaking means you can play a game, watch TV or listen to music while Smart Match finds your perfect match, then you can jump in instantly when it’s ready.

Social features. Microsoft is adding a number of new social features to Xbox LIVE, including a Game DVR feature, an Upload Studio for adding voice overs, skins, slow motion and other features to your recorded clips, and Twitch, a way to broadcast your games in real-time or to take on an interactive spectator role leveraging chat functionality as you view content from multitudes of other streamers.

Entertainment features. Xbox One will be accompanied by an improved Xbox SmartGlass “second screen” experience (console power on and off, adjust volume, manage your TV set-top box and Blu-ray, and more), a new Xbox OneGuide for navigate and watching live TV without switching inputs, and a new, more conversational interface for Kinect voice control.

Microsoft showed off a ton of new games coming to Xbox One during the holiday 2013 launch season. Some of the more impressive games include:

Ryse: Son of Rome. An epic action-adventure story from Crytek that “immerses you in the intensity of Roman warfare as you seek vengeance across the battlefields of ancient Rome.”

Forza Motorsport 5. The next installment of the highest-rated racing franchise of the past 10 years, with “revolutionary Drivatar technology that learns how you and your friends drive, delivering real human behavior and an ever-evolving network of opponents always ready to race — even when they’re not online.”

Dead Rising 3. The next installment of Capcom’s massively popular zombie franchise is an Xbox One exclusive.

Project Spark. An“open-world digital canvas enables anyone to build, play and share their own worlds, games and stories with millions of others online.”

Titanfall. A stunning EA title that will be exclusive to Xbox One, Xbox 360 and Windows PC.

Halo Xbox One. Yep, Halo is of course coming to Xbox One, though this title won’t arrive until 2014. Presumably that’s not the final name.