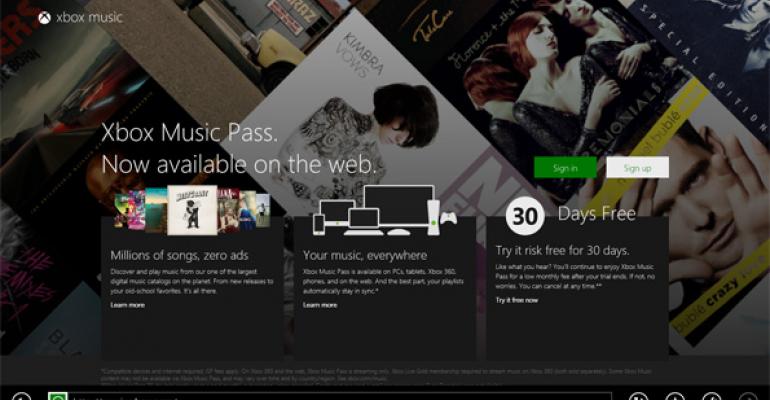 Xbox Music Pass returns to the web with revised UI

Microsoft on Monday silently launched a web version of Xbox Music Pass, giving subscribers streaming access to their music collection from any web browser on PC or Mac. The new service is essentially a relaunching of any earlier web-based version of Zune Music Pass, and while it is modeled on the version of the Xbox Music app that will ship with Windows 8.1, it is much more limited than that app.

Note: I didn’t have a lot of time to play around with Xbox Music Pass for the web yet, but given my experience with Xbox Music on Windows 8/RT, Windows Phone 8, and Xbox 360, I figured I could at least provide a quick preview for now. I will be writing more about this online service in the weeks ahead and will add a chapter about it to Paul Thurrott’s Guide to Xbox Music.

To use the web version of Xbox Music Pass, simply navigate to music.xbox.com. If you’ve used Xbox Music on Windows 8/RT, Windows Phone 8, or Xbox 360, the interface may seem unfamiliar, but it’s simple and logical, and is a reasonable approximation of the Xbox Music app version that will ship with Windows 8.1 later this year. In fact, let’s compare the two. Here’s Xbox Music Pass for web:

And here’s the preview version of the Xbox Music app for Windows 8.1.

So the familial relation is obvious. On the web, you lose a few things, some obvious and some not. For example, because it’s a web service, Xbox Music for web requires an Internet connection and can only stream music that is already in your collection. That music gets in your collection by adding it via any device with Xbox Music Pass or by matching your own music to the Xbox Cloud Collection using the Xbox Music app in Windows 8/RT. In my case, I’ve matched a ton of music, so there’s a lot there already.

Both experiences offer the exact same collection views—Albums, Artists and Songs—and the same sorting capabilities. For example, in Albums view you can sort by Date Added (the default), a to z (alphabetically), release year, genre or artist. But in the Xbox Music app you can also choose to view and access all of your music, just the music you have locally on that PC or device, or just you cloud collection; with Xbox Music Pass for web, you’re only choice (obviously) is your cloud collection.

The Xbox Music app provides access to two very useful Xbox Music services that are (currently) not available to Xbox Music Pass for web: Radio (formerly Smart DJ) and the Xbox Music Store, where you can find and buy music. I’d be surprised if both of these features weren’t added to the web service before the end of the year however.

You do get playlist in Xbox Music Pass for web and as with your general cloud collection, these are stored in the Xbox Music cloud and will sync across all your devices. So you can create new playlists from the web interface, or edit playlists you originally created elsewhere, and the changes will appear in Xbox Music on all of your devices, including Windows 8/RT devices, Windows Phone 8 handsets, and the Xbox 360. This is one part of the Xbox Music uber-service that works as expected between devices, but it’s limited to static (“dumb”) playlists; there are no smart playlists in Xbox Music. (Yet?)

While Xbox Music uses a animated and interactive Now Playing screen on other devices, the web-based Xbox Music Pass offers a simpler, list-based Now Playing view, and it’s available via a navigation bar entry we don’t see today in the Xbox Music app. (There, you click the app bar-based album art to enter a richer Now Playing view.)

The playback controls in the web interface are new but appear to visually match an upcoming change to the Xbox Music app for Windows 8/RT. They’re always visible on the web, which I prefer. But there are some odd omissions. For example, you can toggle repeat but not shuffle.

Overall, Xbox Music Pass for web appears to work pretty well, though adding features missing from the Windows 8/RT app—Radio and Xbox Music Store access, for starters—is an obvious avenue for improvement. And some who used the previous Zune web interface will bemoan the lack of a mini-player, though I’m not sure that’s a big deal.