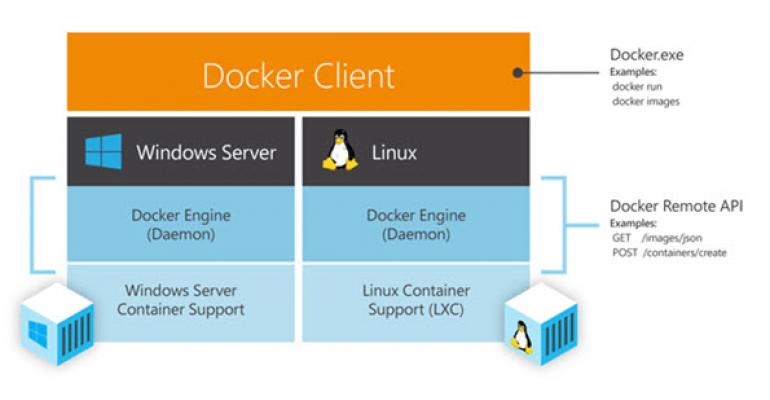 Windows Server Next to Get Docker Container Support

In June of this year, Microsoft unveiled Docker Container support for Linux VMs running in Azure. This allowed Docker-enable Linux applications to run directly in Microsoft Azure. Docker, of course, is an open platform designed for developers and systems administrators to build and run distributed applications. Developers can use Docker to create apps in any language they choose and then ship the apps for use on any platform. Systems Administrators take advantage of Docker apps through enabling workloads in any environment, whether on-premises, in VMs, or in public Clouds. Docker apps are scalable in that they can accommodate changes in demand.

At first glance, you might think that Docker apps are simply apps that run within a VM instance. While they are somewhat similar, the difference is that VMs require the app, its dependencies AND a guest OS. Docker only requires the app and its dependencies. The limitation of a standard, virtualized app means more computing resources are need, as well as a bigger footprint (app + dependencies + guest OS = gigabytes of storage). Docker apps run lean-and-mean, requiring less resources for processing, memory consumption, and for storage.

To allow Microsoft's on-premises customers to take full advantage of Dockerized apps, Microsoft today has announced that it is building Docker Container support into the next version of Windows Server (currently in Technical Preview). Called Docker Engine for Windows Server, the functionality will be developed as a Docker open source project where Microsoft has vowed to participate as an active member. Windows Server container images will be made available in the Docker Hub and the Docker client will be made to run natively on Windows Server.