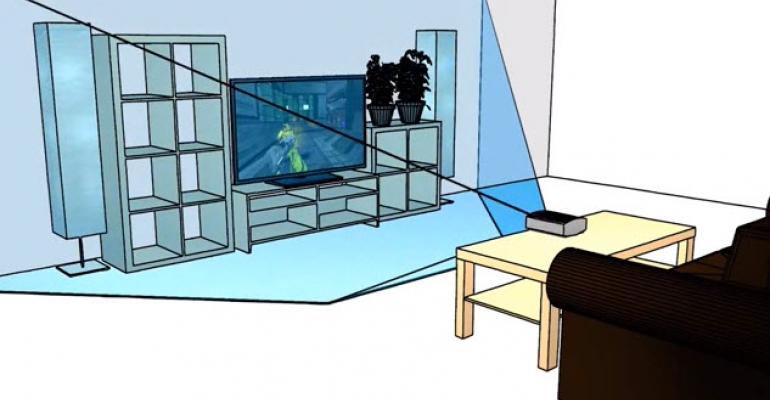 With the news solidified that Microsoft will be revealing the next XBOX on May 21 at the Redmond campus, many have wondered if the cool IllumiRoom technology will be included.&nbsp;

With the news solidified that Microsoft will be revealing the next XBOX on May 21 at the Redmond campus, many have wondered if the cool IllumiRoomtechnology will be included. IllumiRoom is an XBOX technology that removes the barriers of the width and height of the TV screen and immerses the entire room into the gameplay. While the technology is currently targeted to rich gaming, I'd be interested to see if other XBOX service providers (Netflix, Hulu, XBOX Music and Video) might be able to take advantage of full room immersion to enhance movies and music. Imagine watching a movie that fills the entire living room, having to pan right and left (and maybe behind) to capture the entire scene. Or, think about turning on your favorite tune with the virtual band playing on stage in front of you and thousands of screaming fans lining the walls of your den as you become one of a live audience. Microsoft seems to be innovating the most in the XBOX group. Kinect was a game changer (pun intended) and now IllumiRoom provides another breathtaking moment in gaming history.

News circulated yesterday that IllumiRoom is not quite ready so it will not be available as part of the new XBOX release. However, I don't think we'll have to wait for the next XBOX revision before this technology becomes available to consumers. You can pick up Kinect as an add-on so I look for IllumiRoom to hit the consumer pipeline soon.

Let's just hope part of the IllumiRoom delay is branding. I'm not a fan of having to say IllumiRoom too many times. I dare you to try and say it 10 times real fast. About the 5thtime I say it, "Aluminum" comes out.