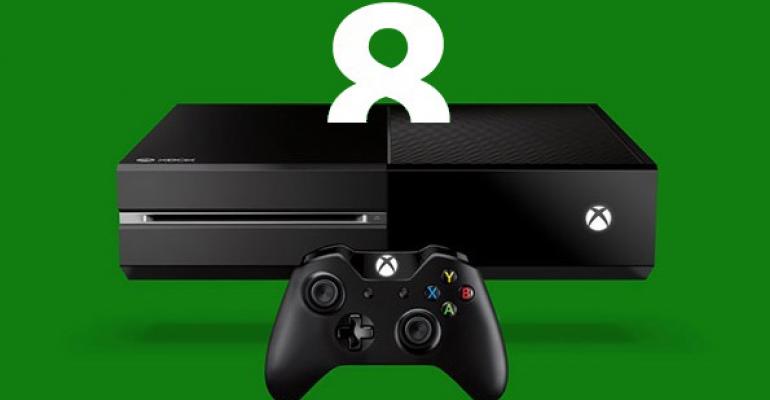 What if Xbox One is Another Windows 8?

While hard-core gamers are freaking out because Microsoft mentioned the word “TV” about a million times during last week’s Xbox One reveal event but barely touched on games, I think the company’s next console has a much bigger issue. It’s very possible that the Xbox One, by trying to be all things to all people, will simply be yet another Windows 8. And that is not what Microsoft needs right now.

This fear dates back to an April 2012 comment by Apple CEO Tim Cook who, at the time, ridiculed Microsoft for melding the classic desktop Windows OS with a new mobile OS I call Metro. “You can converge a toaster and a refrigerator, but those aren’t going to be pleasing to the user,” he said. “The tablet market is going to be huge … I also believe there is a good market for the MacBook Air [Apple’s Ultrabook portable computer] and we continue to innovate in that product. I think it appeals to someone who has different requirements. You wouldn’t want to put these things together.”

Forgetting for a moment Microsoft communications chief Frank Shaw’s excellent comeback—“it’s not a toaster/fridge. It’s a toaster/oven. Those seem pretty popular. Just saying,” he said via Twitter—Cook may have had a point, in retrospect. Windows 8 launched in October 2012 to little acclaim, still has tiny market share for a mainstream Windows release, and users are so in uproar over the confusing UI that Microsoft is changing things in a hastily-conceived Windows 8 update. (Or, as a Microsoft engineer would say, a release that’s been planned for at least two years.)

The problem with Windows 8, I think, can be tied to a single important design decision. Rather than create a separate mobile OS for tablets, Microsoft grafted this new thing (“Metro”) onto the Windows desktop. They did this to ensure success, not because anyone was asking for it: PC makers sell over 300 million copies of Windows a year, so this new hybrid version of Windows would immediately become a major new platform. That was the theory anyway.

What people don’t like about Windows 8 is that it tries to do too much, kind of a, “hey, you got your Metro in my desktop OS!” kind of complaint. Too many people find the hybrid OS confusing and complex. And if you don’t believe that, then please explain why Microsoft is touting Windows 8.1 as an update focused on “customer feedback.” (Actually, please don’t. This is a fact.)

So now we have Xbox One.

So, it sounds an awful lot like the Xbox 360. But there are some key differentiators. These are, in order:

TV. Paradoxically, Microsoft is pushing the notion of controlling a TV signal with the Xbox One in a way that was not possible with the 360. (In the old model, you’d control the TV signal with a Media Center PC and then blast the content over the network to the Media Center Extender app on the 360.)

Performance. The Xbox 360 is a single-minded device, designed to do just one thing at a time. So there are serious performance issues involving switching between apps and games and the Dashboard UI, and no real ability to do more than one thing at a time. This is why Skype was never really a viable experience on the 360, whereas it’s at the center of the Xbox One user experience.

Price. Where the Xbox 360 can be had for as little as $99 with a two-year Xbox Live commitment at $15 a month, and a mainstream version is just $199, the Xbox One is a premium entertainment experience that ships with a Kinect sensor whether you want it or not and will cost $499. There’s no entry level version, and there’s no non-gaming version (though both were planned at one time).

Maybe I’m missing something, but isn’t this weird combination of features—TV! Video games! Online entertainment services! Skype!!—sort of reminiscent of Windows 8? I mean, after all, you’re already paying for cable TV (because if you’re not, this feature doesn’t work with Xbox One anyway). And you can already get a box that works with Netflix, Hulu Plus, and every single other entertainment service on earth there is, and it costs just $99 (or even cheaper). (And unlike the Xbox One, that device is completely silent.)

Given the relatively tiny market of people who actually play video games on consoles—the total actual user base for the Xbox 360 is about 50 million people or fewer, compared to 1.4 billion people using Windows every day—what’s the market for an audience that basically equates to these people plus Netflix and live TV viewers? It’s about 50 million people. No one is spending another $500 to watch Netflix, sorry. Or live TV.

Don’t get me wrong, I’ll wait in the pouring rain to buy an Xbox One. But then I’m part of that sad, weird little market noted above. I’m starting to wonder if Microsoft just made a box that was something the engineers in the Xbox team wanted, rather than something that its customers were actually asking for. And to me, that sounds an awful lot like the way Windows 8 was designed.

Mini-Tablets Will Not Take Over Windows Ecosystem This Year
May 28, 2013