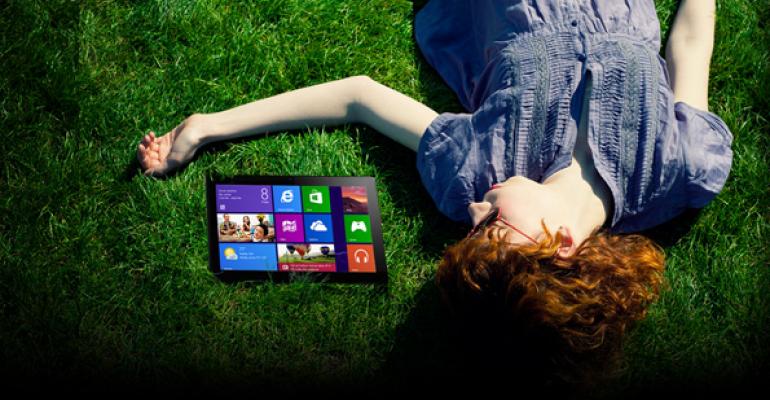 With Windows 8 PC and device sales off to a slow start, Microsoft, Intel, and their hardware partners delivered a curious “hurry and wait” message at this week’s Consumer Electronics Show in Las Vegas. As is so often the case, things are going to be better in the future, the firms say. But this time, it’s truer than ever. You may actually want to wait.

Here’s the problem in a nutshell.

Windows 8, as you know, is a hybrid operating system that merges the PC-centric past with the touch-centric device future. As such, it is ostensibly equally at home on both traditional (non-touch) PCs—all-in-ones/tower PCs and portable computers—as it is on next generation devices such as tablets, hybrid PCs, and touch-based Ultrabooks and all-in-ones. (Yes, opinions vary. Let’s move on.)

The Windows 8 hardware situation has been a disaster so far, to put it fairly. Microsoft’s partners promised a wellspring of new form factors and models in time for launch, but uncertainty over which architectures—Intel x86 or ARM—and which form factors would be most successful with consumers triggered a sad, deer-in-the-headlights response from the hardware makers. As a result, there were few (read: no) compelling devices at launch, and Microsoft internally blamed its partners for the lackluster Windows 8 launch, as I exclusively reported previously.

Of course, it’s more nuanced than that.

Coupled with this uncertainty was another age-old problem that’s always faced Microsoft, Windows, and the PC industry: Timing. Microsoft was ready to deliver Windows 8 for the 2012 holiday selling season, but the chipsets needed to take advantage of its most forward-leaning platform features were only partially available. For example, one of the advantages that ARM brings to the table is its support for Connected Standby, which helps these devices function much like smart phones, intelligently going into very lower power modes automatically in order to save battery life. But ARM devices offer this useful functionality at a cost, too: They offer poor performance and are incompatible with the millions of Windows desktop applications and browser plug-ins that users rely on.

Intel’s knee-jerk response to the ARM threat is something called Clovertrail, a new generation Atom (read: crap) chipset (or System on a Chip, SoC) which offers the same kind of smart phone-like functionality as does ARM, including stellar battery life in fanless designs. Clovertrail devices offer one major advantage over ARM gadgets, of course: They’re fully compatible with all that desktop software. But they also come to the party with some of the same disadvantages, with lackluster performance thanks to a 32-bit design that supports just 2 GB of RAM. Clovertrail is exactly what it sounds like: A 2012-era netbook platform.

Now, you could have just purchased a true Windows 8 PC/device running on a true “Ivy Bridge” Intel chipset, assuming you could find such a thing. This hardware provides full compatibility and full performance, but it does so at the expense of battery life and your sanity: Ivy Bridge devices run hot, and require fans.

When you put this all together, consumers were basically faced with a bunch of horrible trade-offs and, like the hardware makers themselves, reacted mostly with that same deer-in-the-headlights response: They stayed away in droves, driving Windows 8 sales into a funk for the entire launch period through the end of 2012. According to NPD, Windows 8 PC/device sales didn’t just fall short of Windows 7 PC sales during its equivalent launch period, they fell short of PC sales from a year earlier. Cue the Chicken Little horror stories.

With the holiday selling period behind us, however, we can turn our attention to a new generation of Windows 8 devices that will appear throughout 2013, and many will of course feature next-generation chipsets that will hopefully merge the performance of Ivy Bridge with the power characteristics of Clovertrail/ARM. And while we can pretend to be interested in this year’s evolutionary updates to ARM, nothing is more interesting or pertinent to users than that what Intel’s doing.

Intel this week announced a new generation of microprocessors, which pretty much obsoletes every single Windows 8 device that was sold over the holidays. (And to be clear, in this case, I literally mean “device”: Traditional desktop PC designs are not as affected by this evolution of course.) A low bar, I know. But they all represent huge improvements.

These coming chipsets include:

4th generation Core processors. The Ivy Bridge successor, code-named “Haswell,” offer what Intel says is “the biggest battery life gain over a previous generation in company's history,” and will “enable a broad new range of Ultrabook convertibles, detachables [what I call hybrid PCs] and tablets with all-day battery life.” Full-power Haswell chips are not expected until “late 2013,” Intel says.

Low-power Core processors. Intel is finally delivering a true Core processor with the power characteristics required for Connected Standby. These chips utilize as little as 7 watts of power, “enabling thinner, lighter, touch-based Ultrabook convertibles, detachables and tablets.” Best of all, they are available now, and devices utilizing them will be appearing in the market in the coming weeks. Update: It appears that these new 7w parts are based on Ivy Bridge, not Haswell, which may explain their immediate availability.

2nd generation Atom SoC. The Clovertrail successor will continue the power-saving goodness with a 22mm design but make up for its biggest shortcoming, offering “more than double the computing performance of the current platform.” Unfortunately, it won’t be available until holiday 2013, and given the other chipsets, I’m thinking this will be reserved solely for the bargain basement bin part of the market.

There’s some speculation that Microsoft’s Surface with Windows 8 Pro tablet—which I previously exclusively revealed is set for a January 27, 2013 launch—will in fact utilize the low-power Haswell chipset instead of the Ivy Bridge chipset Microsoft has promised. (Mary Jo Foley questions one aspect of this presumed and very much desirable change in Will Microsoft's Surface Pro offer better battery life than promised?) I argue at this point that Microsoft will do irreparable damage to the Surface brand if it does not utilize this new chipset.

Regardless, we’re going to be flooded with new PCs and devices in 2013. My advice is simple: Wait. Wait for the new chipsets, and wait for the new hardware designs being announced this week. There simply isn’t a single compelling, no-brainer device in the market today, yes. But that’s about to change.