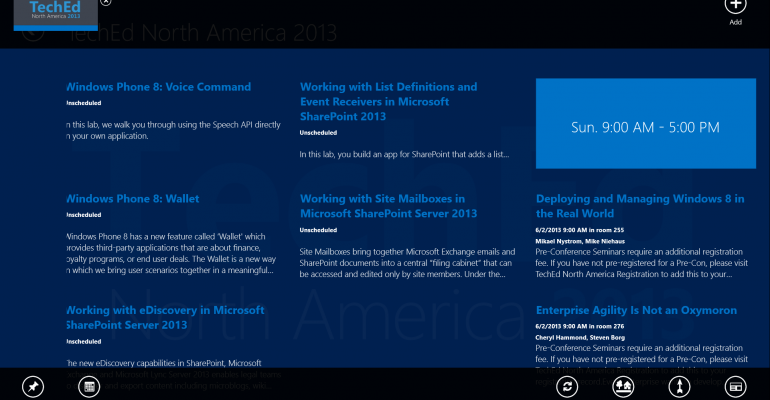 Navigating the TechEd 2013 App for Windows 8

EventBoard is becoming something of a standard for event apps, so it&#39;s great to see Microsoft outsource the app production this year to a company that has proven to be a valuable resource for conference management.&nbsp;

In Go Mobile for TechEd 2013, I told you about some mobile app options for TechEd 2013 attendees. Windows Phone, iOS, Android, and Windows 8 are all represented in the list of supported apps available for reading TechEd news, viewing conference center maps, and planning your week by creating your own personal session schedule.  All of the apps are very similar, developed by the makers of EventBoard, Falafel Software, Inc.

Using EventBoard, instead of a home-grown app, was actually a suggestion a couple years ago. EventBoard is becoming something of a standard for event apps, so it's great to see Microsoft outsource the app production this year to a company that has proven to be a valuable resource for conference management. Both TechEd North America 2013 and TechEd Europe 2013 are available in the app after installation.

I'm running the Windows 8 app on my Microsoft Surface Pro and my Windows Phone 8 HTC 8x. By creating an EventBoard account, my TechEd schedule syncs to the Cloud and gives me my week's view across both devices. I've noticed, though, that the sync isn't perfect as any schedule changes aren't immediate even after refreshing manually. So, you'll have to use a bit of patience to get the full experience.

Still, the app is good and I'm looking forward to using it onsite in New Orleans to experience its true value.

You can download it by searching the Windows Store for 'Ch9' or using the following link:

Don't have a Microsoft Surface yet? Shame on you. But, if you are attending TechEd 2013 you are in luck.  Microsoft has announced an expanded, onsite Microsoft Retail Store this year. In the past, the onsite store has offered a bunch of Microsoft branded items like mice, keyboard, shirts, etc. One of my absolute favorite shirts was purchased from the retail store at TechEd 2012 in Orlando. But, this year, you can expect to find significant hardware to purchase like the Microsoft Surface and real Windows phones from HTC and Nokia. So, there will be no excuse not to leave TechEd 2013 outfitted with the proper gear.

Here's some additional screenshots of the Ch9 Events app running on the Microsoft Surface Pro.