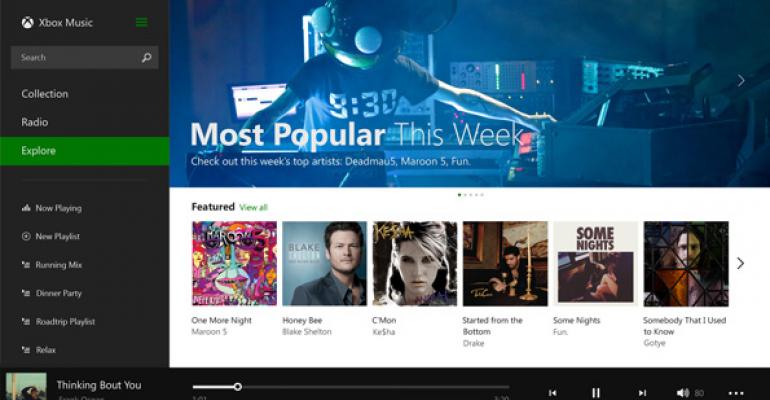 The all new look and feel isn’t done yet

I noted earlier today that the new version of Xbox Music that is included with the Windows 8.1 Preview was pretty disappointing, just a surface-level redesign of the user experience. But Microsoft now says that this release of the app only represents about 50 percent of the changes it’s implementing. And some accompanying screenshots hint at some further changes to come.

That said, Microsoft’s description of this app version has me a bit nervous: They’re touting “the all-new look and feel for Xbox Music,” which is certainly nice. But as I’ve pretty thoroughly documented in Paul Thurrott’s Guide to Xbox Music and here on the SuperSite, there are far more fundamental issues that need to be fixed. Full music matching, for example. Smart playlists. Radio stations with more than 100 songs. And so on.

I think I pretty effectively described what’s changed in Xbox Music in the Windows 8.1 Preview in my earlier post, Hands-On with Windows 8.1: Xbox Music App. But a new post to the Xbox Wire blog today, A Closer Look at the Redesigned Xbox Music, provides some hints about future changes to this app. Some are explicit, but some further changes can be seen in the screenshots in the post, which reveal things that are not available right now in the Windows 8.1 Preview. Interesting.

Here’s what Xbox says about upcoming changes to this app. “The redesigned Xbox Music app in the Windows 8.1 beta is just a preview of what’s to come. In fact, it’s only about 50% of the new features that we’ll be adding. We’ve got lots more from Xbox Music in the coming weeks, so stay tuned for regular updates.”

As for what the shots reveal, there are a few things.

First and most obviously is the app bar-based playback controls, which are changing. In the current version of this app, this interface looks like so:

But in the screenshots, this interface has been streamline and cleaned up. This is much better looking.

It isn’t clear what the other minor change I see is. If you look at the top left of the app UI, there’s a set of green lines next to the Xbox Music logo. What is it? I have no idea. A menu?

There are also some minor graphical changes in the Playlist view, but nothing in the way of new features.

Long story short, the current update is nice looking but lacking in actual new features. But don’t lose hope: That could be changing.