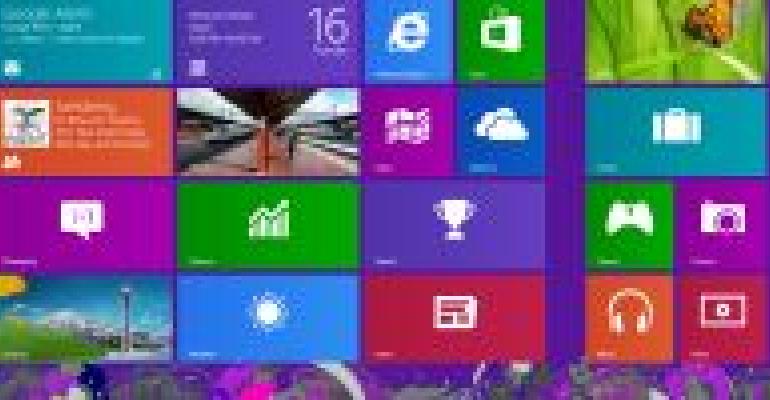 Microsoft Windows 8 Metro UI: One Size Does Not Fit All

Michael K. Campbell discusses what Microsoft should do to make Windows 8 a powerful consumer device.

Dell recently announced that it's no longer a PC company. Last year, HP also toyed with the idea of breaking off its PC business into a separate entity, similar to IBM's decision long ago. Of course, these announcements beg the question, "What companies focus on providing PCs to consumers today?" However, maybe a better question would be, "Is anyone buying PCs today?"

Is My New PC a Workstation?

I can't speak for the rest of the world, but I'm still buying PCs today. In fact, I finished building a brand -new desktop with an Intel i7-3930K on a motherboard bristling with Serial ATA (SATA) 600 ports and sporting 32GBs of RAM.

My computer is coupled with two great solid state disks (SSDs) and is totally capable of meeting all of my needs. This computer also has the ability to spin up multiple virtual machines (VMs) at will and keeps multiple copies of Microsoft Visual Studio and SQL Server Management Studio (SSMS) running alongside several apps at the same time. However, calling this behemoth a PC is probably a bit of a misnomer as it's not a typical PC by any stretch of the imagination. Instead, calling this computer a workstation is probably a better fit.

Hopefully, the notion of calling this computer a workstation instead of a mere PC helps highlight the difference between content creators (e.g., developers, engineers, graphic artists, designers, power users) and the kinds of users who typically use their machine as an appliance to consume content.

I've long maintained that typical end users don't actually need computers and that Windows PCs have always been overpowered for the typical needs of most consumers Instead, most end users need the ability to browse the web, shop online, read and send email, manage photos, participate on social networks, and watch movies, while occasionally managing personal finances or tackling simple business-related tasks. Consequently, it's no wonder that Apple, with its iPad and iPhone, which deliver a more appliance-like approach to computing, is doing such a great job of winning over typical consumers who are clearly sick of having to deal with more computing power and flexibility than what's needed.

And nowhere is the notion of appliance versus computer more apparent than when it comes to newer form factors such as smartphones and tablets. Although there are some applications that you can use for content creation on iOS devices, the reality is that iPads and iPhones are clearly high-end appliances that are designed to streamline content consumption. Despite a glaring lack of extensibility or access to the raw computing power available in these appliances, Apple's "less is more" approach has clearly resonated with end users to the point that not only has Apple set the bar for usability with its own specialized iOS appliances, but also it has manifestly changed the entire computing landscape.

My Worries about Metro

Enter Metro—a fresh new paradigm for managing the user experience (UX) on Windows Phones or devices that are distinctly created for content consumption. Although Metro appears to be a great fit for smartphones, game consoles, and tablets, it hasn't met with much satisfaction as a viable solution for desktops. This dissatisfaction has been attributed to a distinct lack of support for multiple monitors, keyboards, and mice, and because of these limitations, Metro has received a backlash as a UI on desktops.

Of course, it's still early enough in the development cycle that we can hope Microsoft is working to make sure that Windows 8 will be as compelling on desktops as it is on consumer devices. However, it's always hard to tell if Microsoft is listening to feedback or simply working blindly with its own ideas of how customers should conform to Microsoft's vision. For example, take the numerous complaints that developers have made against the Visual Studio 11 Beta. Many developers have agreed that there's something critical missing in Visual Studio's new Metro UX that actually degrades developer productivity after spending any significant time in the UI. Over and over again, the biggest feedback testers are sending Microsoft about Visual Studio 2011 is that the UI is busted and needs serious help. However in this insanely lame list of Visual Studio 11 Beta FAQs, Microsoft doesn't even mention this huge problem, which helps ignite a firestorm in the tiny number of comments that managed to get approved before the post was quickly abandoned by Microsoft. (I added my own comments a week ago and haven't seen them approved yet. And if it sounds like I'm being harsh, does anyone really worry about what kinds of Azure integration that we'll have with Visual Studio 11 when it ships or whether we'll be able to use it to develop Windows Phone apps?) Consequently, it's almost impossible to get a feel for what Microsoft perceives as a priority through any of its official channels. Therefore, it's only natural that developers and passionate customers can and will get worried when it looks like Microsoft isn't listening to legitimate worries and complaints.

Microsoft Needs to React to the Needs of Consumers

In the end, Microsoft is in a tough spot. The company clearly has to address the needs of typical consumers or Apple's hold on the market will cease to be a rounding-error and Microsoft will lose a part of its empire. My hope is that Microsoft's rush to address consumer needs (by creating an OS that feels more like an appliance) doesn't end up giving content creators (e.g., developers and other power-users) the shaft—otherwise we'll end up having a harder time creating the content and apps that will help make Windows 8 the powerful consumer device it's aiming to be.