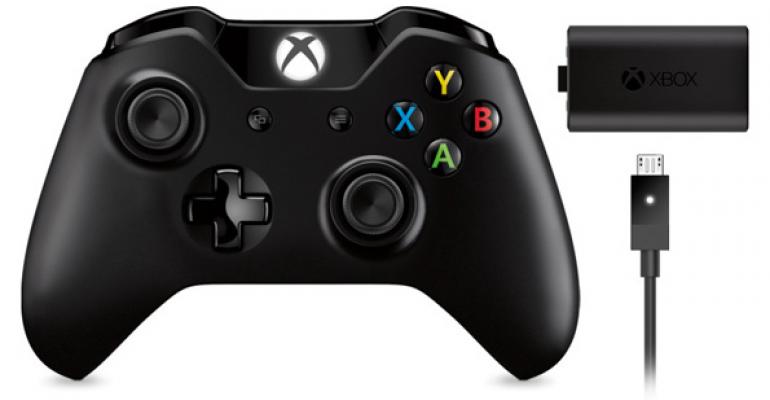 Let me get the suspense out of the way: Pricing appears to be slightly higher to that of similar accessories for the Xbox 360, but since 360 accessories won’t work with the Xbox One, the $499 you’re spending on the console is only the beginning.

This is the standard wireless controller, similar in appear to today’s Xbox 360 wireless controller, which now sells for $49.99, though $59.99 has always been the price point for premium versions of the controller, such as the gray version with transforming d-pad. This version does not include a rechargeable battery (like the stock Xbox 360 version) but comes with two AA batteries instead.

Xbox One Play and Charge Kit

This set includes a rechargeable battery pack for a wireless controller plus a charging cable that you plug into the controller. The Xbox 360 version of this kit is $19.99.

Xbox One Wireless Controller with Play and Charge Kit

This package combines an Xbox One wireless controller with the Play and Charge Kit for $10 less than buying them separately. As expensive as this is, most serious Xbox One users will want the rechargeable battery and thus will want this instead of a stock controller. A similar package for Xbox 360 now costs $64.99.

This isn’t an accessory per se, but the Microsoft Store is also listing an Xbox One-themed version of the 1-year Xbox Live Gold membership retail card. And unlike the above accessories, this one is a bit of a deal assuming you need it: The Day One 12-Month Xbox Live Gold Membership gives you one year of XBLG, of course, but also provides the game Killer Instinct: Round One with an exclusive in-game character. Oh, and it includes a “commemorative card and case” for you hoarders.