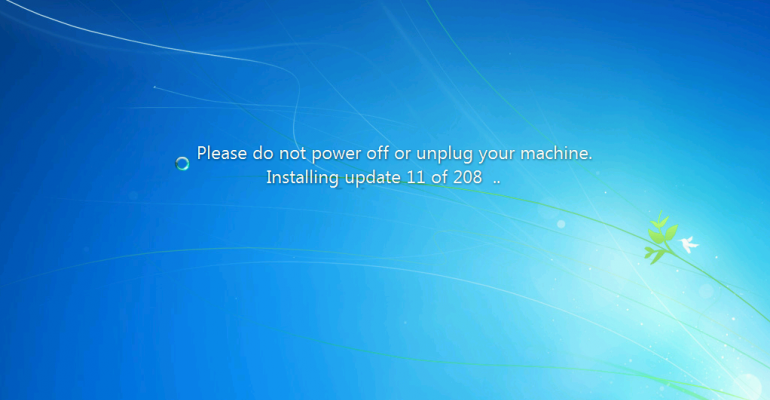 There is no doubt that Windows 7 is now the most abundant version of Windows on systems around the world.

However, have you gone through a clean install of Windows 7 recently?

The number of pending updates, including routine and security related patches, is mind boggling. It takes several cycles of running Windows Update and gigabytes of bandwidth to get them all downloaded and installed on that clean version of Windows 7 or Windows 7 with Service Pack 1.

Normally, service packs are issued every few years in the life of a Windows operating system but for some reason after Windows 7 SP1 was released in February 2011 there has been no additional service packs made available to bring all the released updates together.

Those long hours of downloading all those updates for Windows 7 are now over thanks to a new convenience rollup for Windows 7 SP1 that Microsoft is releasing today.

This package contains every single security and non-security update for Windows 7 since the release of SP1 in February 2011 and contains up to and including the April 2016 cycle of updates.

This download is only available from the Microsoft Update Catalog using the link above and will not be offered through Windows Update. However,  this rollup can be integrated into Windows 7 SP1 media so that your fresh install includes all of those updates already.

By the way, this convenience update rollup is also available for Windows Server 2008 R2.

These monthly updates will be available on Windows Update, WSUS, SCCM and in the Microsoft Update catalog.

This brings these systems very closely in alignment with the Cumulative Update style we see on Windows 10. Download one update, the latest monthly rollup, and then any security related patches to be completely updated. Of course, that also requires you to use the rollup for Windows 7 SP1 as well.

On top of all of these changes, the Redmond company is also modifying where they offer and distribute the update packages.

You can read more about today's announcement over on the Windows for IT Pros blog.