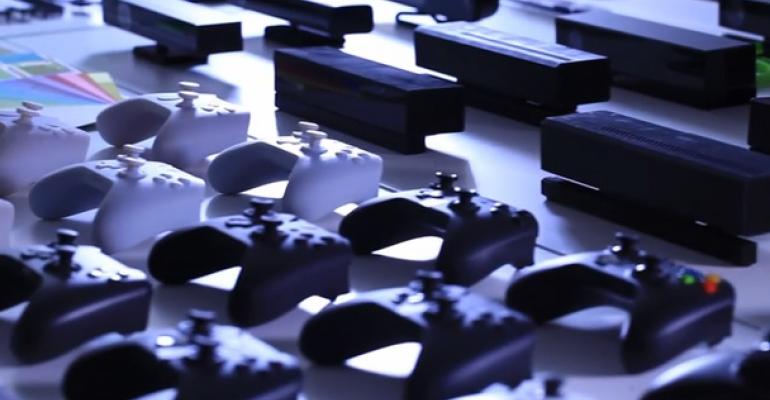 Defending the Design of the Xbox One

It's not ugly, it's just really well designed

For all the complaints we’ve heard about the Xbox One since the reveal event, the one that is perhaps the most universal is about its design. A pretty clear majority think that Microsoft’s next entertainment console looks huge and unwieldy, bricklike and dense. But the Xbox team not coincidentally this week issued an interesting defense of the design of the console, noting that the design of the Xbox One reflects its mission.

“Xbox has always had something to say. It’s always been bold with a strong personality,” says Xbox Creative Director of Industrial Design Carl Ledbetter. “Xbox One needs to serve our most loyal gaming fans and deliver unique entertainment experiences, so its design has to make an appropriate statement that reflects its capability as an all-in-one entertainment system.”

(Side note: That quote is an important piece of positioning, one that backs the other major gripe about the Xbox One, its apparent focus on non-gaming activities like live TV and entertainment services. But make no mistake that Microsoft sees this console as a multi-purpose entertainment system, not as a video game console that can also do other things.)

According to the Xbox team, the design of the Xbox One follows a wide range of considerations. They boil down to the following.

Modern and sophisticated. Born in the age of Apple’s ascendance, the Xbox 360 reflected its own day: It was Apple white and curvy, and designed without any regard to the actual technical needs of its internal components. (The loud running original Xbox 360 often overheated, red-ringed, and required warranty fixes.) The Xbox One is also designed to be the “ultimate gaming and entertainment system,” as was the 360, but it’s a product of this age, and everything about it—its appearance, how users interact with its software, and so—is designed to reflect that. That said, I still think it looks like a tank.

Simple and inviting. Say what you will about the look of the Xbox One, but it is indeed simple (not sure about “inviting”; it kind of looks like something Darth Vader would plug into at night). Only a slot-loaded Blu-Ray drive mars the front of the console; there are no other ports, holes, or other visual distractions.

Flawless performance. While only time will tell the tale of the Xbox One’s reliability, it’s pretty clear that Microsoft learned its lesson with the Xbox 360. The Xbox One has ginormous fans and while it won’t be completely silent, I suspect it will be both very quiet and very reliable. That it’s built on well-understood PC/x86 parts this time confirms this.

Integrated system. Microsoft says that the only way for it to achieve its goals for the Xbox One was to create it as an integrated system, with the hardware and software designed together, side-by-side. When you consider how frequently the 360 Dashboard was updated, often dramatically, I’m not sure that will result in any long-term benefits. But I do think that the decision to ship just one Xbox One console, which includes a Kinect sensor, is the right one. With the 360, you have to work around whether this device is present or not.

Unified design language. As has been the case with Windows Phone, Windows 8/RT, and Surface, Microsoft create the Xbox One hardware and software interfaces with an eye on the “Modern UI” (read: Metro) design principles that impact virtually everything the company is doing these days. “The design language uses a series of tiles and fluid motion,” Microsoft notes, and is oriented for 16:9 widescreen displays and cinematic presentations. More interesting, perhaps, Microsoft claims that the hardware is designed to mimic the 16:9 tiled-based presentation used by the software.

Consistent experiences. In a modern take on Microsoft’s age-old “better together” mantra, the Xbox team says that the Modern UI experiences on Xbox One are consistent with the similar experiences users see in Windows 8, Windows RT, Windows Phone and Surface. The idea is that those who use more than one modern Microsoft product will appreciate this consistency and will enjoy the ways in which they work together.

Liquid black. This one is interesting: Microsoft says that the Xbox One hardware—including the controller—utilizes liquid black, “the blackest black creatable,” as the brand’s new color palette. “This selection was motivated by the same guidance followed by high-definition TV manufactures: dark colors accentuate content and bring the entertainment experience to the forefront,” the team notes. Liquid black components “melt into the background” when you’re using the console, so that you will automatically focus on the on-screen content and not on the hardware. Likewise, the Dashboard background is liquid black so you will focus on the content in the live tiles on-screen. And on the controller, the “traditional A, B, X and Y buttons were re-designed so that the colored letters now float on a sea of rich, liquid black, a ‘triple-shot of injected resin,’ clearly defining their placement on the controller.”

In-house iteration. Microsoft designed the hell out of the Xbox One, and like the Windows Phone team, which loves to babble endlessly about the tenets of their Metro design, they want you to know about it. Let’s just say there are workbenches and Geppetto-like wooded cubbies that you just know are full of little physical designy things. These people are designers, folks, and they know what they are doing. Do not question what they’re created.

Still not getting it? Queue up the rock soundtrack. We have a video.