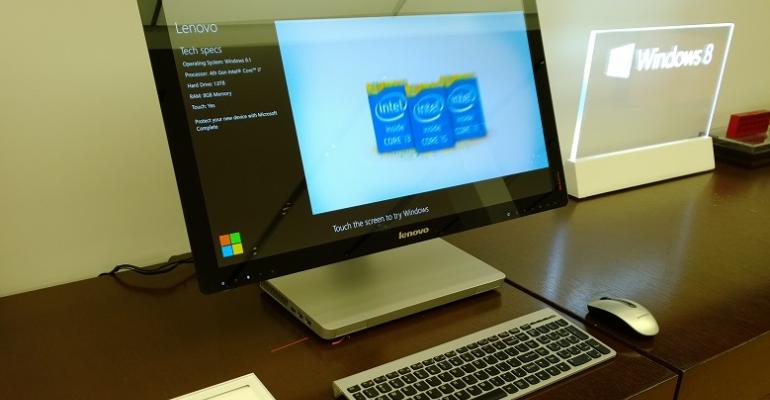 During the holiday shopping season, and yes, "Black Friday," friends, family, and readers ask what they should purchase, device wise.  So this year, I'm going to publish that advice here.

I've worked with a lot of different devices since the pre-release of Windows 8, and I've spent quite some time with the new batch of devices that Apple, Microsoft, Samsung, and Lenovo have recently launched.

Caveat: These are my opinions only, and they're worth what you're paying for them.

Microsoft vs. Apple vs. Samsung

The first thing that's apparent is that, from the device perspective, we're clearly in a world owned by three ecosystems.

Windows. The Windows ecosystem, owned by Microsoft, has its flagship devices (Surface and Surface Pro, XBOX, and Nokia Lumia phones). It also has a lot of support from third-party device manufacturers, like Lenovo, HP, Dell, ASUS, Acer, and Samsung.

Apple. The Apple ecosystem is, as always, Apple. You have your iPad AIr and Mini, iPods, iPhones, and MacBooks Pro and Air.

Android via Samsung. Then there's the Android ecosystem, which is increasingly owned by Samsung.

Now I'll be straight up with you: I don't like the Android ecosystem.  I have philosophical concerns with an ecosystem driven by Google and what that means to my personal information.

But moreso, I just don't understand it. It seems to add a lot of complexity and necessity to tweak and modify, harkening back to DOS days, while the world is supposed to be that much simpler now.

I might be way off base, but I just don't like the ecosystem, so I'm leaving it out of this discussion.  Many others will review the incredible devices from Samsung and others in this category.

You really get a feeling for the differences in the ecosystems, now, when you enter their retail experiences.  The Apple store is very clean, sparse, and black-and-white.  It shows off Apple's limited range of exceptionally popular devices.

It hasn't changed much since its inception and, to be fair, "if it ain't broke, don't fix it." It's packed with customers, though interestingly skewing to the older demographic.

The Microsoft store is a riot of color, with displays showing off all kinds of different devices from numerous manufacturers. Phones, tablets, convertibles, all-in-ones, tabletop to pocket, game consoles, and software galore.

It's also packed.  Customers are playing games, not just touching devices or waiting for geniuses to support them.

There's no single retail experience for the Android ecosystem but there are Samsung stores, and there you see the real future of ecosystems, crossing into video and still cameras, watches, and devices that Apple and Microsoft's ecosystems don't touch yet.

The demographic seems to me to be the youngest in the Samsung/Android spaces.  This is where the hip energy and dollars are being spent.

For those of you in the USA, many Best Buy stores now have stores-inside-of-stores. You'll find, in a single Best Buy, Apple, Samsung, Microsoft and Amazon stores. Very cool way to experience all of the options.

In no particular order, these are the devices I would seriously consider for 2013.

Please think carefully about these things.  And not just how you've done things in the past, but the benefits they might provide you in the future.

Also note these might change your perceptions about just how great the Apple ecosystem is. I have been a fan of iOS, but my support is on a steep decline.

Personally, I'll carry an iPod touch or iPad mini to fill in app gaps, but as of late there are none.  I have my iPad with me now, but simply don't use it. It's an expensive "security blanket."

But there's one more amazing option: BlueStacks. BlueStacks is an Android emulator that runs as a desktop app, so that, on your WIndows 8.1 device, you can also run Android apps, to fill in any gaps in the Windows store.

There are a few apps I run in that mode--though fewer and fewer every day.  Flipboard, for example, was running in BlueStacks, but now I have it, natively, on Windows.

Unfortunately at this point BlueStacks is a desktop app only, so it doesn't fill the gaps for Surface 2 (RT).  But as long as you're running full-blown Windows, you can use BlueStacks.  And I recommend it!

Finally, there are phones. I use my Nokia Lumia 1020 and it is the best phone I've ever owned and, yes, I was an iPhone owner.

Not only is it the best phone, it is without doubt an amazing camera.  My point and shoot has been in my drawer at home since the day I got my Lumia.  Well done Nokia... er... Microsoft...!

If you're going to get a Windows phone, get a Nokia.  Their apps (like HERE maps and camera apps) are amazing and constantly improved.  And now, of course, they'll be "official" Microsoft devices and apps.

Not to say that Samsung and Apple phones aren't great--they certainly are. But in the Windows space, there's a reason Nokia has 80-percent-plus of the market.  The phones are really good, and give you a serious range of choices for price and featureset.