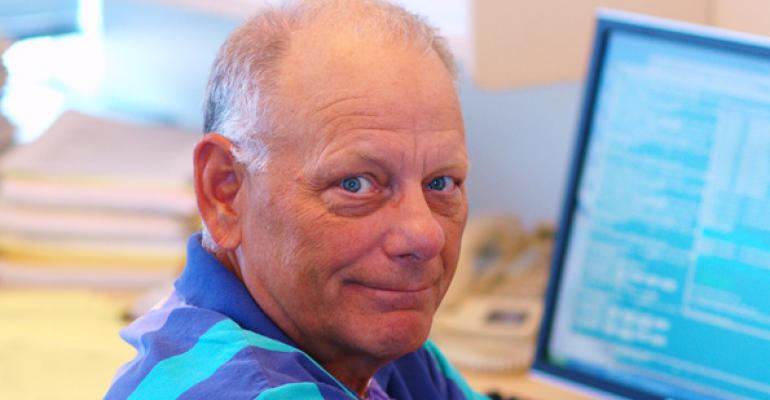 Twenty years ago this past weekend, Microsoft released its first version of Windows NT, the software foundation on which the firm’s devices and services empire now rests. NT has had an amazing 20 years, and while I’m sure the next 20 will be just as interesting, this is a good time to step back and remember the past.

First, if you’re not familiar with the development of Windows NT, I strongly recommend reading (hopefully re-reading) “Showstoppers!” by G. Pascal Zachary. (It’s available in paper, Kindle, and Nook versions, among others.) Still the definitive account of the creation of a monumental software product, “Showstoppers!” includes some amazing blasts from the past.

Ostensibly named for “New Technology,” NT was OS guru Dave Cutler’s follow-up to VMS, and thus one can add one letter to each of the letters and arrive at WNT, or Windows NT. Cutler had been developing this VMS sequel, originally code-named Mica, to run on a RISC platform called Prism. But when Digital cancelled the project, Cutler jumped to Microsoft and changed computer history forever.

NT was driven by Cutler’s desire to one-up UNIX, which he saw as old-fashioned and inefficient, and his dream for the OS was that it would one day be in use for 20 years, just like UNIX. Congratulations, Dave. You did it.

Of course, much of the success for NT should also be given to Microsoft co-founder Bill Gates, who was smart enough to not just hire Cutler and a bunch of ex-Digital geniuses like Mark Lucovsky (who helped create the NTFS file system) and a handful of outsiders like David Thompson (who led the development of NT's networking subsystem), but to leave them to their own devices. Cutler’s team operated as a skunkworks of sorts within Microsoft, basically a separate organization that could do its own thing. And it did.

From here on out, things are going to get a bit fuzzy, because I’m dealing with my own memory and not well-documented computer industry history. As a technology enthusiast, I was always intrigued by NT and other systems like UNIX and NextStep that simply weren’t, in the early-to-mid-1990s, available to the masses. I recall picking up a box for the original version of Windows NT—which was hilariously named Windows NT 3.1 to match the versioning with the then-current version of 16-bit Windows—in a Best Buy and wondering at its heady $300 pricetag. Who could afford such a thing? And why would they even want it?

My understanding of NT in those days was that it ran on traditional PC hardware, but very, very slowly. I didn’t get a chance to use the product until the release of Windows NT 3.51 (code-named Daytona), a version that offered better performance and reliability. Of course, just a few months later, Windows 95 happened and with it Microsoft’s transition to a new desktop-based OS shell, Explorer, which replaced the Program Manager (and other manager interfaces) from earlier Windows and NT versions.

NT 4 (also called the Shell Update Release, because it was basically NT 3.51 with the Windows 95 shell and some new management tools) was the first version of NT I used regularly. Indeed, I had been writing books for a few years by then, and I had shipped my first software to the public, so NT 4 was perfect on two counts: I wrote a book about NT 4 for higher education and used this system to write Delphi applications; unlike with Windows 95, it wouldn’t crash down to the hardware regularly. In fact, it was rock-solid.

(The night NT 4.0 was released, I went to a party and was pushed into a pool in a bit of silliness that’s probably not hard to imagine. I visited the local Software Etc. to purchase the final retail version of the software soaking wet, and was followed around the store suspiciously until the employee saw I was going to spend over $100 on NT.)

By this time, NT stood for everything that was right at Microsoft, as far as I was concerned. And I was eager to see Microsoft move this technology to the mainstream. The firm intended to do just that with the next release of NT, called Windows NT 5.0. In fact, I was so impressed by Microsoft’s plans for this release that I started a new website called Windows NT 5.0 SuperSite so that I could write about it regularly. That site, since renamed to Paul Thurrott’s SuperSite for Windows, is still around 15 years later.

Just a few months later, however, things changed. First, internal marketing won the branding war and, deciding that the Windows name was far more important than the NT name, rebranded the product as Windows 2000. Then, in order to get the continually delayed product out the door, Microsoft stepped back from its plans to merge the Windows 9x codebase with NT in this release. Instead, it shipped the reviled Windows Millennium Edition (Me) in the same year as Windows 2000, extending the life of the old DOS-based Windows family another few years.

(I came onboard with Windows NT Magazine just before they changed the name of the publication, first to Windows 2000 Magazine.)

Microsoft of course realized its grand plans with Windows XP, which did indeed carry NT forward, silently, as the sole mainstream Windows product line. But in many ways the purity of NT had long since ended. During NT 4.0’s lifetime, Microsoft had integrated the unsafe and immature Internet Explorer codebase into the OS core unnecessarily and in order to harm Netscape, triggering a decade of antitrust issues.

But NT soldiered on, though few remembered its name. Indeed, when Microsoft talks about Windows being the most malleable software ever created, it’s really talking about NT, and not the old DOS-based Windows. The NT kernel lives in everything from the Xbox to Windows Azure to the phone in my pocket. It is indeed one of the most versatile technologies on earth. It is also one of the most popular.

Ironically, NT’s foes today are the same as in the past: Some variant of UNIX drives both Android and iOS, the two most popular mobile platforms on earth, while Microsoft is pushing forward with the NT-based Windows 8.x and Windows Phone. Now, as in the past, few believe that Microsoft can oust the market leaders, or even offer something passingly good. But as it did before in the PC, workstation, workgroup, small server, server, datacenter, and cloud computing markets, Microsoft has a secret weapon. It’s called NT. And don’t you forget it.

Actually, here’s one last little tidbit to consider. Dave Cutler never left Microsoft, and after innovating in some ways you might not be aware of—he spearheaded Microsoft’s acceptance of the AMD64 platform, making it the industry standard x64 platform on which all PCs are now based, for example, helped create Azure, and most recently delivered NT’s OS and Hyper-V technologies to Xbox One—he’s now back where he belongs, in the core Windows team. Will this lead to yet another NT renaissance, or is Cutler—he’s over 70 years old now—ready for retirement? I don’t know. But I hope the possibility of Mr. Cutler going hands-on with NT again is keeping Microsoft’s competitors up at night.