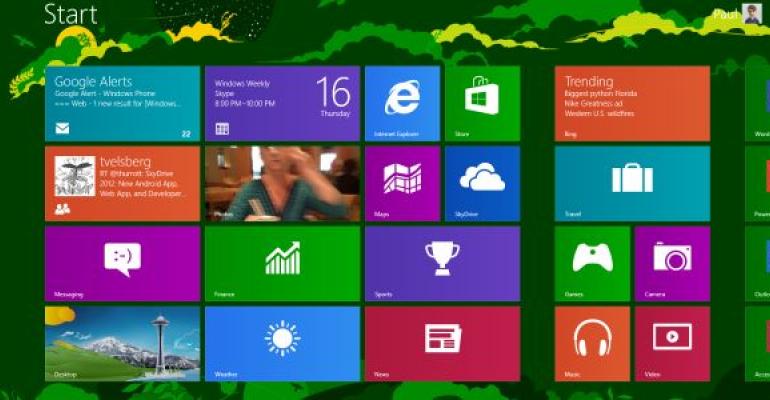 20 Windows 8 Devices that Wowed the Crowds at CES

Microsoft was at full force in Vegas ... even if it actually wasn't

Microsoft might have been only a “sort of” participant at this year’s International Consumer Electronics Show (CES) in Las Vegas—Steve Ballmer took part in Qualcomm’s “Born Mobile” keynote address, and the Surface Pro made an appearance to give attendees a sneak peek—but Windows 8 has been very much on the minds of exhibitors and attendees. It’s a welcome vibe for Microsoft, given the slow launch numbers that the company has seen since the debut of its controversial new consumer OS.

Microsoft partners have come up with a bevy of cool and unusual designs to bolster the decidedly controversial Windows 8 OS. You know you’re in for something new and acrobatic when one of the products is called a Yoga! But it’s a fascinating landscape of options and innovation. Acer, Asus, Dell, Gigabyte, Lenovo, Samsung, Sony, Toshiba, and Vizio all displayed some very promising Windows 8 Ultrabooks, tablets, hybrids, and laptops in varying designs.

CES attendees were drawn in large numbers to all the players, curious about what this Windows 8 tablet offered that was different from what that Windows 8 hybrid offered. For many, it was a first look at Windows 8 itself. In many ways, CES is proving to be the new OS’s actual “coming out” party, as opposed to its official launch last fall.

Check out our slide show of some fascinating CES-featured Windows 8 devices.

Acer Iconia W510—This tablet doubles as a laptop with its detachable keyboard—shades of Surface Pro, because this system also includes the full Windows 8 OS, not Windows RT. It has a 10.1” display, at 1366x768 resolution. It comes with 2GB SDRAM memory and a 64GB hard drive. Battery life is 9 hours. The cost is $749.

Asus VivoTab Smart Tablet—This multi-purpose tablet features an Intel Atom Z2760 dual-core CPU, a 10.1” display at 1366x768 resolution, 2GB of memory, and a 64GB hard drive. Like the Surface, the VivoTab has a stand and a keyboard that doubles as a cover. Battery life is 9.5 hours. This device could offer the best of both the Surface Pro and Surface RT worlds. Pricing to come.

Asus Transformer Book TX300CA—This hybrid Ultrabook and tablet is geared toward multi-touch portability. It’s got a 13” screen at 1920x1080 resolution, an Intel Core i7 processor, SSD and HDD storage, and 4GB DDR3 RAM. The Transformer Book sports dual cameras, with a HD front-facing camera and a 5MP rear-facing camera. Pricing to come.

Gigabyte S1082—This Windows 8 tablet features an Intel Celeron dual-core processor, a 10.1” display at 1366x768 resolution, 2/4/8GB DDR3 memory, and a range of HDD and SSD storage options. Battery life appears to be exceptional, with the option of an extended-life battery. Pricing to come.

Lenovo IdeaPad Yoga—This 11” convertible Windows 8 laptop folds upon itself to become a touchscreen tablet. It features an Nvidia quad-core Tegra 3 processor, 2GB of DDR3 RAM, and 64GB of storage. The device is 0.6 inches thick and weights about 2.8 pounds. The cost is $799.

Microsoft Surface Pro—That’s right, Surface Pro made an appearance at CES so that attendees’ and journalists could get an early look at the Windows 8 variant of the device. It sports a 1920x1080 10.6” display, and Intel Core i5 processor, 64GB or 128GB of integrated memory, and 4GB of RAM, as well as a range of connectivity options. Plus, it’s got that groovy detachable keyboard. Pricing starts at $899

Samsung Series 7 Chronos—Here’s a high-powered laptop that comes in a light, streamlined package. This system offers 16GB of memory, 1TB of storage, and a 15.6” screen with 1920x1080 resolution. Battery life is 11 hours. Pricing to come.

Samsung Series 7 Ultra Touch—The ultra-mobile Series 7 Ultra offers an Intel Core i5 or i7 procession with up to 16GB of RAM. The 13.3” screen offers 1920x1080 resolution. Battery life will be about 8 hours. Pricing to come.

Sony Vaio T Series 15—This full-HD, touch-enabled laptop features a 14” LED backlit display at 1366x768 resolution, third-generation Intel Core processors (options include i3, i5, or i7), a 500GB hard drive, and up to 8GB RAM. Pricing to come.

Toshiba Satellite U845T—This featherweight budget-focused touch system features a 14” 1366x768 screenHD touchscreen display, an Intel Core i3 or i5 processor, 6GB of RAM, and a 500GB hard drive. Pricing is around $800