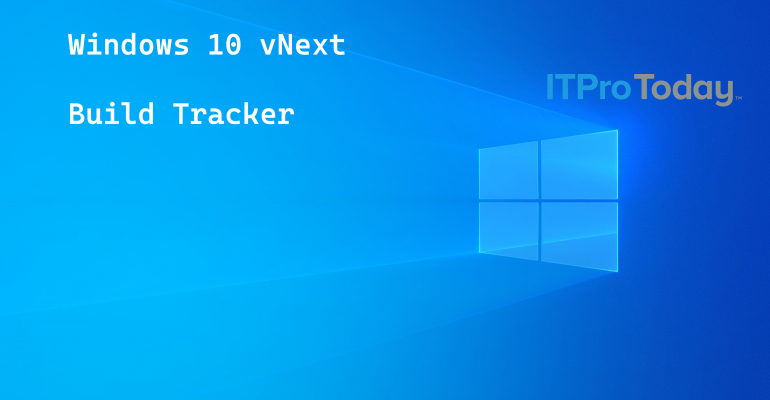 Start Slideshow ›
As Microsoft continues developing Windows 10 vNext, we track public releases to assist you in monitoring what builds are available for enterprise testing.

Microsoft's Windows Insider Program for Business provides enterprise customers the opportunity to test pre-release builds for Windows 10 as they are being developed.

This is beneficial because that early access can help IT departments evaluate future updates for compatibility with hardware, software, and line of business applications.

Over the course of the last few years, here at ITProToday we have maintained a set of build trackers to bring all of the build release information into one central location.

With the availability of Build 19536 for Windows 10 in the Fast Ring, Microsoft is taking a fresh approach to their ring based build releases moving forward. This build and those which follow it, are not tied to any particular code named feature update but instead will be unofficially known as Windows 10 vNext.  Within this development branch of Windows 10, the latest features and enhancements will be introduced for testing, evaluation, and feedback. No specific feature will be tied to an upcoming feature update for Windows 10. However, once the Redmond company is ready to specifically work on the next feature update, they will branch out a baseline build to the Slow Ring for further development and preparation for public release.

As Microsoft moves those builds to Slow Ring, we will continue to track them here at ITProToday alongside the Windows 10 vNext builds in the Fast Ring.

Just as we have stated in our past build trackers, there is no schedule when it comes to these releases for Windows 10 vNext. We suggest bookmarking this page so that you get an alert when an update has been posted about a new build.