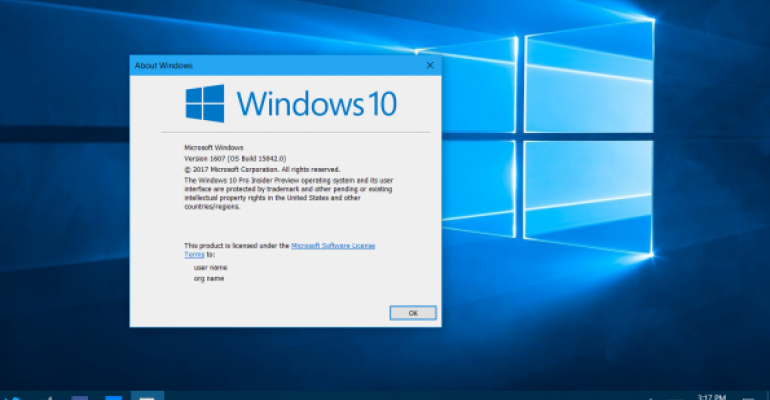 Today, after more than two weeks of waiting, Microsoft has finally released new builds for the Windows 10 Creators Update, aka Redstone 2, for both PC and Mobile devices in the Windows Insider Fast Ring.

Build 15042 for PCs is the 21st and Build 15043 for Mobile devices is the 15th for those platforms bringing the total development/testing builds for the Windows 10 Creators Update to 36. In comparison, the Anniversary Update, which was released last August, saw a total of 49 builds released prior to its general availability. That breaks down to 26 builds for PCs and 23 for Mobile devices so the Creators Update is only 13 builds away from matching the output of the Anniversary Update testing.

Ultimately, I am off the mind that quality wins over quantity so if the final version of the Creators Update is solid then the number of testing builds ends up being inconsequential.

As expected, there are no new features in this build because, as we learned two weeks ago, the Creators Update is now feature complete. They did tweak a couple of recently added features by updating the Cortana animation for the out of box setup experience, adding a pop up to notifiy users that a Flash element on the webpage they are visiting has been blocked, and they changed the icon in a Microsoft Edge tab when reading a local copy of an ePbub book.

When Build 15031 was released it was the first build to come from the rs_release branch which was one of the steps to moving the Creators Update towards general availability in April.

The release of Build 15042 today marked another milestone along that path with the removal of any watermarking on the desktop to indicate a pre-release build was installed.

Although there were no new features added beyond the tweaks I already mentioned above, I did notice a big overhaul of the Settings menu in Microsoft Edge. Among the changes I saw it looks like the Favorites settings have been moved from their own sub-menu to the top level of Settings. This includes the options to show the Favorites Bar, Import from another browser, and clearing browsing data.

Under Advanced Settings in Microsoft Edge the Show the home button option is for all tabs/pages and not just specific pages. In other words if you opt to display the Home button it will be persistent across all Edge windows and tabs.

The new Share Icon has now been incorporated into Microsoft Edge, Windows Ink Workspace, and other apps including the Windows Defender Hub. Developers must make changes to their apps to access the new icon resource in the Creators Update.

A new option under Clear browsing history as added the ability to also clear Edge tabs you have previously set aside.

The yellow text on the Windows Update settings page that was there and said “Some Settings are managed by your organization” has now been removed and should please many users.

If you do not like suggestions on the Start Menu there is a right click menu now to turn them off instead of needing to access that in Windows Settings.

Finally, I noticed one other thing when checking out the new Share Icon in the Windows Defender Hub and it is going to bug some folks.

You will notice the suggestion of installing the Line app to use as a sharing target. I went ahead and toggled off all of the settings relating to suggestions in Start, Lock Screen, and throughout Windows but this still shows up. Ultimately, I would expect this to get removed by turning off the suggestions as you use Windows setting in a future build.

If you review the PC and Mobile trackers we maintain for the Redstone 2 builds you will see a lot of fixes are incorporated into this build as we continue the march towards General Availability of the Creators Update in April.