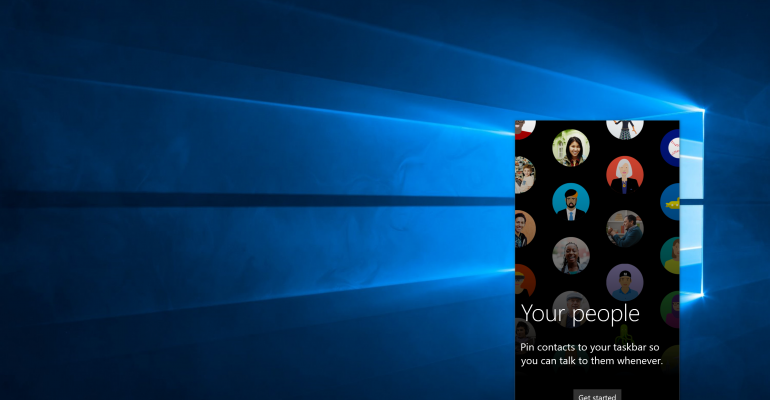 Creativity can sometimes be a team activity so quick and easy access to your top contacts can save you time during projects. The Your People toolbar on the Windows 10 Fall Creator Update taskbar can put those contacts right at your fingertips.

Sometimes the creativity process is a very individual activity and at other times a team takes on a project. Communications with those team members is critical to the creative process whether you are working on a new building design or a software program.

Your People, also sometimes referred to as People or My People, is another one of those features that was demoed last Fall and expected to be part of the Creators Update when it was made available earlier this year but it did not make that cut. Since the testing process for Redstone 3, aka the Fall Creators Update, began shortly after the Creators Update release this feature has been part of test builds and has been worked on over the last six months.

The concept behind People on the taskbar in the Windows 10 Fall Creators Update is to have a spot to pin your most important contacts so you can immediately see any communications from them whether it be from e-mail or a chat program like Skype.

When any type of communications comes in from that pinned contact you will see a notification badge over the contact's icon:

You can reply back to emails and other interactions directly from the contact card in People without opening the original app itself:

Right now the number of programs that take advantage of the new People APIs for the pinned contact are limited to some in-box first party apps like Mail and Skype. Developers of these types of programs will need to start adding these functions to their own apps to expand the robustness of the communications aspect for this feature. I would like to see the official Twitter app implement this so you can pin key contacts and see their tweets/replies right from the taskbar.

Now when you use the Windows 10 Fall Creators Update Sharing Dialog you will see your most accessed contacts at the top and then the available apps that are sharing targets.