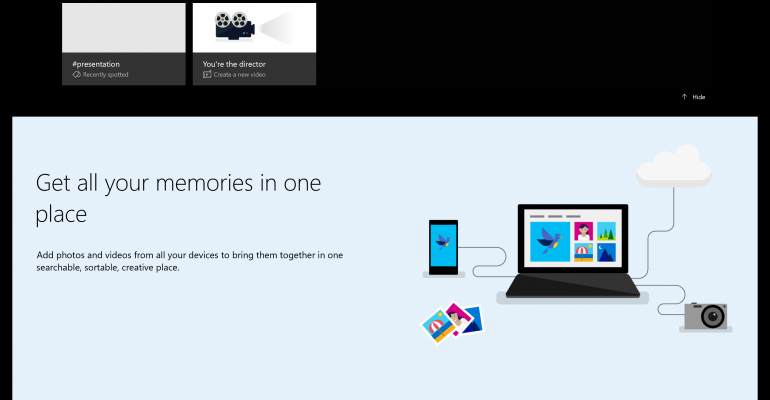 Learn about the enhancements to Microsoft's Photos App that introduces enhancements around the creation of videos and slide shows including new 3D Effects, Music, and Text features.

For first party in-the-box apps such as Photos, it helps that their development is not tied to the operating system and they can be updated by their teams on an independent schedule. However, major updates and new enhancements for an app like Photos are sometimes tied to functions in the operating system, and that is the case here with the changes to the Photos app under the Fall Creators Update.

Under-the-hood search has been updated with machine learning and artificial intelligence to help identity and tag your photos based on their content. You don't have to have tagged photos previously in order to get this capability and when you discover incorrect tags they can be removed or manually updated. The Photos app also continues to tie into your local and OneDrive photo storage -- plus you can easily import images from external storage devices and digital cameras for use in the app.

Only some of the slick Story Remix features that were demoed during Build 2017 are making into this major update to Photos. They include: A new prominent button across the top of the Photos App labeled Create and highlighted in blue is your entry into creating one of three things:

-- Video Remix: View and edit a video made for you
-- Video project: Edit a new video from start to finish
-- Album: Gather related photos and videos

You can also select the Creations tab to create, view, or edit previous projects you have created: Once you have rendered your first video you can being that into a new video and also add 3D Effects to various parts of the video. There is a good collection of 3D effects included in the app but if you are also a subscriber to Office 365 there is bonus effects available to you through the app. If you are creating a new album there is an edit option to Remix the collection of images along with new music and timing just by clicking one button. This allows you to get creative ideas and then you can tweak the creation on your own.