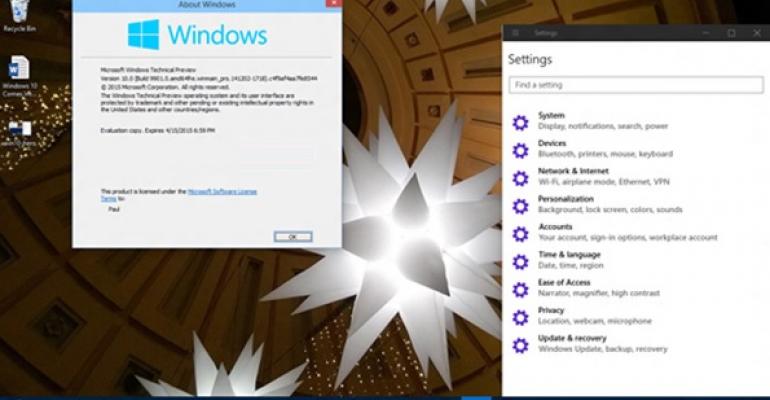 In late January, Microsoft will hold a special event for press and analysts at which it will unveil more information about Windows 10 and how it will work on all kinds of devices, not just traditional PCs. But we don't need to wait until next month to gain a clearer picture of Windows 10: Thanks to a number of leaks, we can already see some of the hidden features that will make this release a more cohesive whole.

This is a big deal.

As I wrote previously in Windows Technical Preview is Microsoft's Alchemy Moment, Windows 10 is arguably the most audacious release in the history of the platform. And I mean that in ways that may be a bit more profound than is immediately obvious. Consider how important it was when Microsoft finally created a single platform from DOS- and NT-based Windows variants and called it Windows XP. But with Windows 10, Microsoft reaches even higher. It is creating a single computing platform for Internet of Things and embedded devices, smart phones, tablets, hybrid PCs, laptops and desktop PCs, and even Xbox One.

Looking at just the personal computing side of Windows 10—which is what I'm most concerned with anyway—I see a release that does the impossible in providing a perfectly acceptable upgrade for users of all modern, supported Windows versions. If you skipped Windows 8 because it was too unfamiliar and alien, well there's good news: It will look and work much like Windows 7 with a Start menu and a desktop-oriented user experience. But if you embraced Windows 8 on a tablet or other touch-screen device—some insist these people actually exist—Windows 10 will likewise offer a familiar and obvious upgrade with the interfaces you've come to expect.

To date, however, Microsoft has only communicated some of what it's planning for Windows 10 and the pre-release versions of the OS that it has shipped through the Windows Technical Preview have revealed even less. Since October 1, the firm has issued three Windows 10 builds, and each was focused almost exclusively on traditional, non-touch PCs.

What's changing is that in January Microsoft will begin showing off—and providing to testers—new Windows 10 features that bring in the other half of this release's personal computing promise. Signs point very clearly to there being two basic Windows 10 versions for end users: The productivity-focused version we're now testing and a coming touch-focused version that will be used on both smart phones and tablets and eschew the desktop environment entirely.

Today's Windows is quite a bit different. Microsoft uses a single code base for Windows 8.x on PCs and tablets, but it uses a separate Windows Phone OS for smart phones. By combining Windows Phone with "big" Windows into a release that Microsoft would be crazy to not call Windows Mobile, it is adopting a more logical strategy: Tablets have a lot more in common with smart phones than they do with PCs.

Of course, hybrid PCs—what some call 2-in-1 PCs, transforming PCs, convertible PCs, and other names—complicate matters. But the Windows 10 release for PCs will handle that eventuality nicely with a best of both worlds approach: When the keyboard is attached, it will act like a PC, but you can also detach the keyboard and use it like the tablet it (really) is.

Anyway, it's those latter bits—the Phone/tablet version and the hybrid functionality, which Microsoft calls "Continuity"—that we're waiting to see in the consumer preview. Recently-leaked builds of Windows 10 don't contain fully-working examples of either, though both are hidden in there in raw forms and hackers are busy doing what they can to expose the functionality. What we do see in these new builds, however, are further refinements to the OS that speak to its need to work well across a variety of devices.

We see the further merging of the desktop-based Control Panel with the Modern PC Settings in a new app called, logically enough, Settings. We see new Modern apps and improved Modern apps. A deeper integration with OneDrive. Cortana integration with voice-based interactions. A new version of the Store app that works with both phone and PC apps and games, as well as music, TV shows and movies. And some improvements that should please tablet users, such as a real full-screen mode for Modern apps (which was basically missing in previous builds).  (Check out my hands-on report for more info.)

Most of this isn't earth-shattering—though Cortana may qualify for that description—but if you've been suffering because of the terrible Windows 8 design, or simply sitting still with Windows 7, these and other changes are satisfying. Between the publicly-available Windows Technical Preview and these leaked builds, Windows 10 is really starting to come together. And my feeling that Microsoft is on to something special only increases.

And of course January isn't the only Windows 10 milestone to look forward to. Microsoft billed its late September launch as an enterprise event, but we won't really see the new enterprise features in Windows 10 until sometime in 2015. And of course Microsoft has not yet explained the Windows 10 developer story: You can expect that in early April at Build 2015. It's going to be an interesting year.