/sites/all/themes/penton_subtheme_itprotoday/images/logos/footer.png
Recent
Recent
Microsoft's Project Reunion Attempts to Unify Win32 and UWP Apps
Jul 02, 2020
Solving the US Data Center Renewable Energy Puzzle
Jun 30, 2020
How the Pandemic Has Forced a New Normal in the Data Center
Jun 30, 2020
Open Source NAS Update: As Much about Development as Storage
Jun 30, 2020
Is the DevOps Model Killing the Developer? In a Word, No
Jun 29, 2020
Featured
Make Remote Working Work for the Enterprise
Oct 09, 2019
Windows 7 to 10 Migration Tools Buyer’s Guide
Jun 17, 2019
5 Key IT Skills for the New Decade
Jun 27, 2019
How Microsoft LAPS Can Help Improve Endpoint Security
Jun 29, 2020 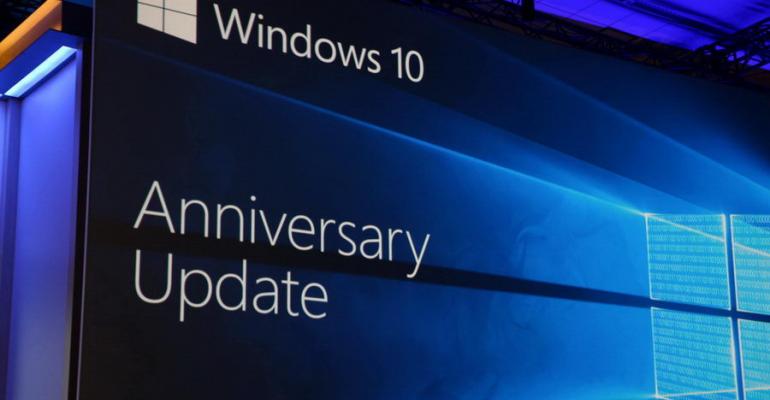 WSUS and System Center Configuration Manager (ConfigMgr) administrators should thank early wranglers of Microsoft’s latest update for finding bugs. There’s been a non-stop series of customer reports and complaints about various issues from lockups and hangs to just simply not installing correctly. Of course, as has been the case since Windows 10 officially released in July 2015, success and failure can vary even between similar devices with the same hardware and same software setup. It’s one of our generation’s great mysteries, much like the Nazca Lines, Stonehenge, and the Bermuda Triangle have astounded and stumped generations past.

Microsoft should fix the nagging issues quickly and has already deployed a couple updates to attempt to solve some of the problems. More should be on the way.

However, Microsoft has now also stated that those who use WSUS and System Center Configuration Manager to deploy OS upgrades and updates will be able to start delivering Windows 10 Anniversary Update on August 16. That’s when the installation bits will arrive. Most administrators of those systems should approach the upgrade with scrutiny until Microsoft can issue an all-clear and an apology through the delivery of fixes.

But, even when the update is ready to arrive, it’s not all smooth sailing. To ensure that the update works with the current implementation of WSUS and ConfigMgr, administrators will need to take some manual steps. Those are outlined in a blog post from Yvette OMeally on August 5th. The blog post provides all the information for preparing the update infrastructure, but also provides a warning. Without 2 updates being applied the update will not apply correctly…

The Windows Team has released update KB3159706 that enables the provisioning of decryption keys in WSUS for Windows Server 2012 and 2012 R2. This update is necessary for WSUS to be able to natively decrypt the encrypted Windows 10 Anniversary Update packages, and any subsequent Windows 10 feature upgrades.  Additionally, the 1606 update for the current branch of Configuration Manger contains new client support that allows these types of packages to install correctly using the Configuration Manager Windows 10 servicing feature.