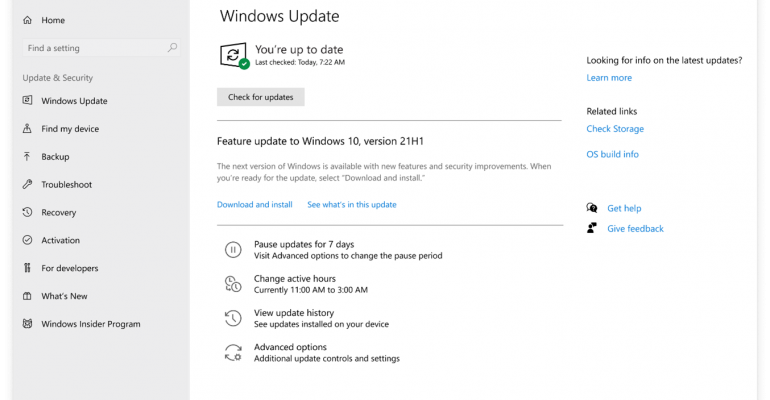 Windows 10 21H1 Update is now ready for feature validation by enterprise customers. This is a preliminary step before final release sometime before the end of June 2021.

As we reported in February, the spring update of Windows 10 is usually a full feature update, but Microsoft has shifted that bigger update to later in the year.

Related: The IT Pro Guide to Microsoft Insider Programs

The spring Windows 10 21H1 Update is a small cumulative update which will be activated on end user devices through what Microsoft calls an enablement package. Since it is a small download, the update process will be very quick.

Microsoft makes the pre-release version of this update available for early access through their Windows Insider Program for Business to allow organizations to test key hardware and software and ensure full compatibility with the update prior to its full general availability.

Support for installing this update on test devices is available in Microsoft’s normal software distribution channels such as Windows Update, Windows Server Update Services (WSUS), and Azure Marketplace. An ISO, which can be used to create installation media, is also available on the Windows Insider Program for Business website. Download the Windows 10 Insider Preview Beta Channel Build 19043 for the Windows 10 21H1 Update pre-release.

Microsoft has established that commercial/enterprise devices are any edition of the operating system except those running Windows 10 Home. In addition, those devices must either be managed by an IT administrator through Microsoft Endpoint Manager or another third-party device management tool, use a volume license key, or be joined to a domain.

Pre-release versions of the Windows 10 21H1 Update installed on an organization’s devices can receive official support from Microsoft under the Windows Insider for Business Program.