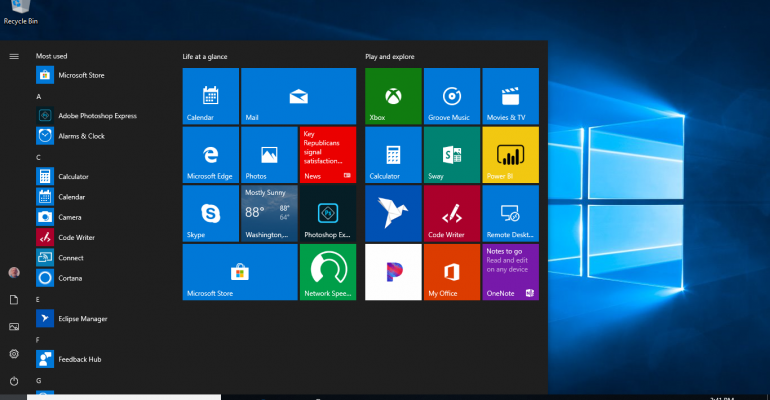 This week Microsoft began the rollout of the sixth feature update for Windows 10. Although it is too early for enterprise customers to be considering this build for widespread deployment in their organizations, early access and testing will help prepare for that process when it arrives.

During a software and hardware event in New York City this week, Microsoft corporate vice president for Windows & Devices Yusuf Mehdi announced that the October 2018 Update for Windows 10 is complete and ready for users to install.

Of course, the term ready for install has different definitions for consumers versus enterprise and business users. Microsoft has released this feature update in what it calls seeker mode. That means users can manually check Windows Update to look for this upgrade or they can use software like the Media Creation Tool or Update Assistant to get this upgrade.

However, for IT pros in enterprise and business organizations, having their users grab the October 2018 Update using these methods is likely blocked - as it should be. With the issues that are starting to pop up on social media about missing files and incompatible drivers causing issues with this upgrade, that is a good thing because productivity isn't impacted with these challenges.

The Windows 10 October 2018 Update is the first September/October feature update release that is now due to receive a full 30 months of support instead of just 18 as was previously available. That means more time for organizations to settle on a specific feature update and give themselves more time to migrate users between these semi-annual Windows 10 upgrade cycles.

In order to prepare for possibly rolling out this upgrade to users, IT pros can use several tools and resources that have been updated for this release by Microsoft.

Availability for Enterprise Customers and Partners

Windows 10 Enterprise Version 1809 is available to partners with Microsoft Action Pack Subscriptions (MAPS) via the Microsoft Partner Network (MPN). All other editions of Windows 10 will be available via MAPS beginning Oct. 22.

For enterprise and business customers who use the Volume Licensing Service Center (VLSC), Windows 10 Version 1809 will become available in the coming weeks, according to Microsoft.

As mentioned earlier, every feature update adds enhancements to Windows 10 in the areas of security and management which are very important aspects of the operating system for enterprise and business customers. As summarized by Microsoft, this feature update is no different than its predecessors, and there is a rundown of more than 30 key features that are in the Windows 10 October 2018 Update. Here is a snapshot of the top items:

Although the October 2018 Update just arrived, we are already tracking development work on the next feature update for Windows 10. This one is known by its new code name of Windows 10 19H1. That translates to the update being available in the first half of 2019, expected to be in the March/April time-frame.

It is never too early to get started with the Windows Insider for Business Program to move your organization forward to look at what's coming next for Windows 10.