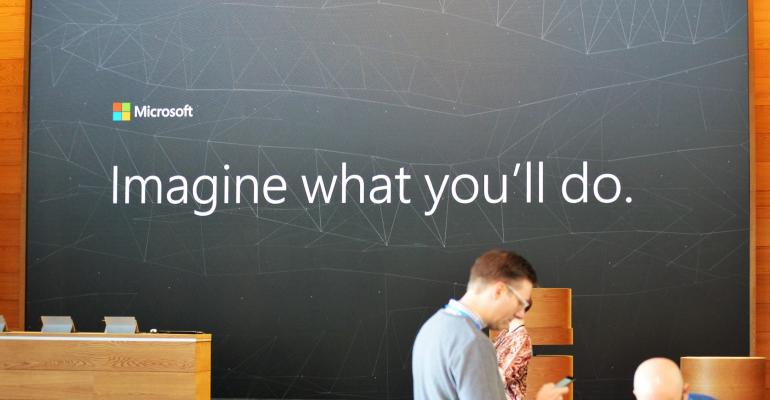 At the #MicrosoftEvent in New York City yesterday, Microsoft made several major announcements as expected on both the software and hardware side of Windows 10.

While there were plenty of hardware rumors making the rounds in the days leading up to this event what we had not heard leaked in anyway was the expected theme for this update.

So far, Microsoft has released two major updates for Windows 10 which are now more formally known as Feature Updates. The first, labeled the November Update, came out in November 2015 and it was followed by the Anniversary Update which was released one year after the initial release of Windows 10 itself. Neither of these updates to Windows 10 had a particular vibe to them and they each contained a variety of new features, tweaks and updates.

However, with the revelation by Microsoft's Terry Myerson, the companies Windows leader, that this update would be called the Creators Update it may be signifying a shift in the development of Windows 10 that sees each Feature Update targeting a certain concept/theme in its continued maturation.

Don't get me wrong: Just because this update is targeted towards creators does not mean other areas of the operating system and first party apps are not going to also be updated or see new features that are unrelated to being a creator. In fact, we saw a little bit of that with the updated tools for maintaining contact with your closest family and friends but more on that later.

So let's take a look at what Terry Myerson and other speakers had to say about the Creators Update for Windows 10.

He shared some stories about individuals that have been impacted by Windows 10, and reminded everyone about Microsoft's mission to empower people and organizations to be more productive. The next step was to introduce the idea of technology empowering creators; this ultimately led to the announcement about the next major Feature Update for Windows 10, the Creators Update.

That update is expected in the spring, possibly in March 2017.

I got the vibe early on in the event that this discussion around creators was taking direct shots at Apple and its reputation as the default tools for creators in the world. It seems Microsoft is preparing to position Windows 10 as that platform. Little did we know at this point in the presentation that we would see a big hardware correlation to the concept of using Windows 10 as creators.

We then got a demo of Paint 3D and learned that its predecessor, Paint, has been around for 30 years in Windows and that 100 million people use the program each month on Windows. If you are a Windows Insider you can download and try Paint 3D right now from the Windows Store.

The first demos of new 3D tools in the upcoming Creators Update for Windows 10 showed just how easy it was to take a real life 3D object and scan it into Windows 10 and Paint 3D for further manipulation and refinement.

Yes, that is a Windows 10 Mobile device on the #MicrosoftEvent Stage

Also showcased was a new community, called Remix3D, to share created 3D objects with each other because in this day and age it is all about sharing across all kinds of communications channels.

We were also shown how this 3D integration for the Creators Update to Windows 10 will allow Microsoft to incorporate these new 3D capabilities into programs within Microsoft Office and other areas of the operating system. The 3D integration in the PowerPoint app was quite frankly stunning and may forever change the phrase Death by PowerPoint.

No specific timeline was given for when the Office programs and others tools will appear, but I would expect them to be tested ahead of Microsoft releasing the Creators Update next Spring. You can see this portion of the keynote.

When 3D comes up around Windows 10, then HoloLens is usually close by and it was today. That same 3D object that had been in the real world earlier in the demos was now available in the mixed reality world of HoloLens. Shortly after that it was made available in a set of Virtual Reality goggles and a special 3D place to enjoy those items and experiences like the new HoloTour that can transport you right into the middle of Italy via VR.

The VR aspect of this demo also revealed a new partnership between Microsoft and HP, Dell, Asus and Acer to bring VR headsets that just work with the Windows 10 Creators Update.  The price point for these goggles will start at $299 which is a very reasonable price compared to other offerings for VR. This may also mean VR headsets will be coming to an Xbox One console near you in the near future with the Creators Update.

Gamers are also considered creators and they were included in today's announcements including tight Beam integration in the Creators Update for the Xbox One console and Windows 10 PCs. Beam, which was recently acquired by Microsoft, provides a service very similar to Twitch which is now owned by Amazon. This feature in the Creators Update will allow gamers to easily start streaming and interacting with their friends and viewers as they play their favorite game and all can be started with just a few clicks.

Another new feature for gaming that was mentioned was Arena Custom Tournaments. Xbox One and Windows 10 gamers can now create their own unique tournaments around a specific game, invite their friends and then jump right into the competition. Xbox Live will keep track of the wins, losses and stats while the tournament creator and their friends focus on gaming and it will do it across any Windows 10 device that supports the game.

One final update that will also arrive with the Creators Update on Xbox One is the addition of Dolby Atmos support for the consoles Blu-ray player.

Of course, before closing out the Xbox and gaming portion of these announcements, Microsoft made sure to mention that their console has been the best selling device in the United States and other regions for three straight months. That is the longest consecutive streak since the next generation consoles came out in late 2014.

Next up we learned of a new feature that is what I consider one of those non-creator features we will see in this next major update for Windows 10.

As this portion of the keynote was happening I had more than one person mention to me on social media that this feature felt like the return of the People Hub which was very popular in Windows 8/8.1 and allowed easy interactions with your contacts.  As the demo progressed it became apparent that this was the People Hub and much more.

The feature, called Windows MyPeople, will allow you to place your favorite contacts right on the Taskbar for quick and easy access for sharing documents, images or other items by just using drag and drop. Of course, any incoming communications for these contacts will also show up near their icon on the Taskbar for immediate notification and action.

These contacts will also be readily available through the integrated Share options in Universal Windows Platform apps.

Paint 3D is already supported in the current Fast Ring builds being tested by Windows Insiders. Early builds with the other new features should be heading for Insider systems in the near future.

Also, if you want further proof that new features coming to the Creators Update next year will not only focus on being creators but also improving Windows 10 overall, just watch the Introducing the Windows 10 Creators Update video from Microsoft (embedded below).

Can you keep up with the number of system related features that are flashed across the screen in those 74 seconds?

What are your thoughts on the upcoming Creators Update?