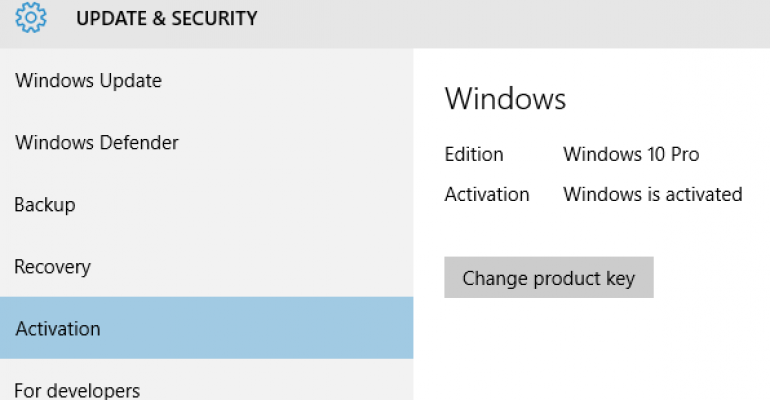 Our most heavily trafficked and commented articles leading up the Windows 10 launch in late July were all about upgrading to Windows 10 and the activation process. You can read them here and here.

Very little was coming out of Redmond prior to the launch of Windows 10 on this subject and with licensing already being a challenging subject anyway it led to a lot of speculation.

Microsoft has finally offered details with the publication of a resource called Activation in Windows 10 on Microsoft’s Windows 10 website.

We know that activation is different in Windows 10, specifically around the free upgrade that is being offered to Windows 7 and 8.1 users, and there is now a name for this activation process which does not use a product key – Digital Entitlement.

As the site confirms:

Digital Entitlement is a new method of activation in Windows 10 that doesn't require you to enter a product key.

Your Windows 10 system is eligible for activation via Digital Entitlement under the following circumstances:

Product key activation of Windows 10 falls under these situations:

The Activation in Windows 10 site also has 5 additional sections that cover these situations and others in more detail:

There are a couple of key areas in those details that I want to highlight for awareness. Some have been previously reported but it will be beneficial to lay them out again.

Still missing from this new Activation in Windows 10 site are any details about the ability to transfer licenses from one device to another.

For business and enterprise customers that are under licensing agreements with Microsoft – those agreements will provide you your usage rights, transferability and other info.

On the consumer side most licensing falls into two categories – OEM and Retail.

OEM licenses for Windows are tied to hardware such as devices sold by manufacturers like Dell, ASUS, HP, etc. Those licenses are already restricted from being transferred to other devices or hardware. On most newer devices those licenses are embedded in the system BIOS for activation/verification purposes.

Retail licenses on the other hand can be moved from one system to another as long as the OS is not used on the previous device. That restriction exists because a retail license for Windows is only supposed to be active on one system at a time.

When you upgrade to Windows 10 those underlying licenses still exist which means a Windows 10 upgrade over an OEM license remains tied to that hardware while a retail version of Windows 7/8.1 that was upgraded to Windows 10 could still be moved to a new device.

Of course, that will require the reinstall of the original genuine OS, Windows 7 or 8.1, on the new device and then upgrading to Windows 10 so that system registers for Digital Entitlement for activation purposes.

What remains unclear is whether that upgrade to Windows 10 will still be free if that underlying retail license, that was previously upgraded to Windows 10, is moved after the one-year free upgrade period has ended on 29 July 2016.

I have reached out to Microsoft with this last question to see what they have to say. I will update this article once I hear back from them.

So does this new information from Microsoft help to clarify things in your mind relating to Windows 10 upgrades and activations or does it still leave unanswered questions?

But, wait...there's probably more so be sure to follow me on Twitter and Google+.
9 comments
Hide comments
Recommended Reading