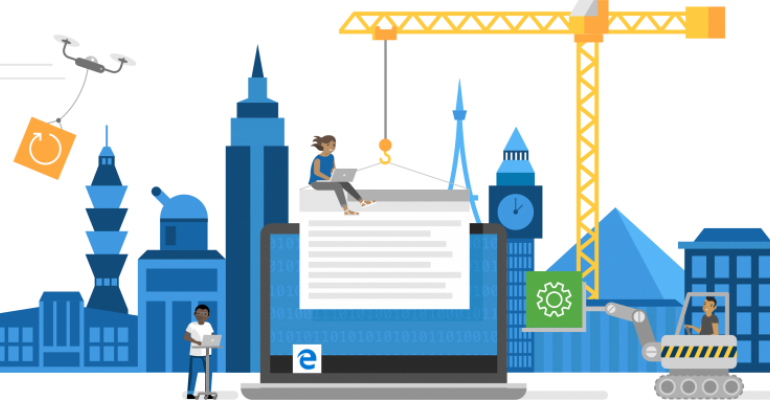 New updates are coming to the Microsoft Edge browser as work continues to incorporate the Chromium rendering engine in a refresh of the company’s latest web browser.

The Microsoft Edge browser is currently being rebuilt on top of the Chromium rendering engine and today at Microsoft’s Build developers conference, a trio of new features were announced to the public for the first time.

We first heard of Microsoft’s intent to build a new version of their Windows 10 based web browser using Chromium as the rendering engine back in December 2018. The Redmond company had seen the Microsoft Edge browser that was part of Windows 10 struggle for market share against Chrome and Firefox its primary competitors. By embracing open source, Microsoft expects to improve the browsers overall compatibility with the wider web, bring many of the unique Edge browser features to more than just Windows 10, and improving the overall Chromium engine for all browsers that use it as its core.

Development versions of the new Chromium-based Microsoft Edge browser became available to the public at the beginning of April in canary (daily) and developer (weekly) options. Although currently only available on Windows 10, eventually the new Edge browser will be publicly available in a stable release option for Windows 7, 8.1, and MacOS.

According to Microsoft, the new features announced address three key fundamental areas that can create frustration for customers.

Microsoft’s venerable Internet Explorer is still supported on all supported versions of Windows. It continues to be part of Windows because organizations depend on it for legacy support with line of business application compatibility. With IE Mode, the new Microsoft Edge browser built on top of Chromium will give organizations a tab that runs in IE Mode. That means continued compatibility and legacy support but with the ability to upgrade to a modern browser for everything else.

This will likely have a positive side benefit on how much market share the new Edge browser will gain since so many enterprise organizations still use Internet Explorer for compatibility.

Windows 10 has some of the most robust and granular controls for privacy than any modern operating system. Since its launch in July 2015, those controls have continued to be improved and integrated across all aspects of the operating system.

The Microsoft Edge browser based on Chromium will gain additional privacy controls that will enable organizations and end users to customize how much information is used during the browsing experience.

Based on the setting, adjustments will be made to how third-party websites can track you during your browsing activities. Microsoft says more choice will result in additional transparency about what is shared as you browse.

The basic concept was that software would have a tab capability, just like a web browser, where a user could have different programs open in each tab. This would facilitate research projects, reports, and other activities that required simultaneous access to the web, word processing, and image editing. Rather than having three different program windows open, users would have just one with a tab for each software program. The system would remember these configurations and open them back up again when a went back to their work.

Recently Microsoft announced that they would no longer be testing Sets as part of Windows 10. However, the new Collections feature that is planned to be part of the Microsoft Edge browser based on Chromium just might be its replacement.

Microsoft stated that Collections will allow customers to collect, organize, and export this varied content more efficiently. In addition, it will include integration with Microsoft Office.

All these upcoming features will make their way into the new Chromium-based Microsoft Edge browser first as part of the development process and then eventually into general availability of the browser.

ITPro Today will be onsite in Seattle this week for Build with our hands-on coverage. Follow me on Twitter at @WinObs and keep coming back to check in on all of our Build coverage.