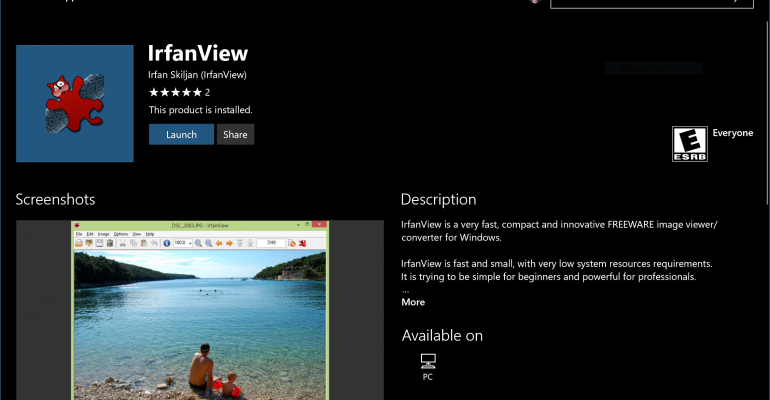 Every time I have written about what I use in my daily work processes there is one desktop graphics utility that I have listed - Irfanview - which I consider a critical tool because it allows me to perform batch conversions of images. This comes in very handy when I have attended an event and need to reduce the size of all of the camera images I took so I can post them here at SuperSite in a gallery.

However, if I was trying to make a move to an app only existence like Windows 10 S users must, this would be a sticking point since I have not been able to locate an app in the Store that can do the batch conversions.

That all changes today and my goal of moving to an app only existence on Windows 10 is one step closer with today's addition of Irfanview to the Windows Store.

Right now Office 365 Education users on Windows 10 S can preview Word, PowerPoint, and Excel all through the Windows Store.

Note: OneNote already has a well developed UWP app available in the Store.

Of course, the big disconnect with an approach like this is the lack of some desktop software in the Windows Store.

Remember, Microsoft announced Windows 10 S, a version of the companies OS that can only run apps from the Windows Store, that would be installed on the new Surface Laptop by default. The reason for this restriction on Windows 10 S was to facilitate better security by disabling a users ability to install programs they download themselves from the web. This also comes into effect by eliminating any risks of drive by downloads of malicious software as a user browses the web.

So keep an eye on which apps migrate to the Windows Store via the Desktop Bridge. This is only a start, we hope.

I reached out to Irfan Skiljan, the developer of Irfanview, and asked him a few questions about the process of getting the program into the Windows Store via the Desktop Bridge. I will post these details in a new article when I hear back from Irfan.

Update: Check out my follow-up with Irfan about his experience in using the Desktop Bridge for Irfanview over on our DevPro Connections sister site.