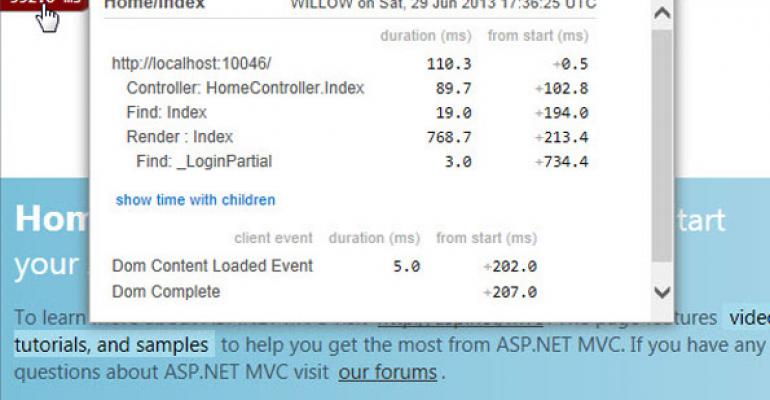 I recently worked on a project that involved some HTTP handlers and modules in an ASP.NET MVC 4 application that included some performance and profiling work. During the course of research for that project, I stumbled on a gem that has evaded my knowledge until now, even though I know now that people such as Scott Hanselman were talking about the tool as far back as 2011. That gem is MiniProfiler. It's developed by the folks who brought us StackExchange, and it's a marvelous resource for getting technical questions answered.

MiniProfiler is a minimal but very effective tool for .NET and Ruby applications. It's targeted primarily for data access performance problems and supports ADO.NET, Entity Framework, LINQ-to-SQL, and other data access technologies. MiniProfiler also has the ability to instrument your code to provide custom performance data during execution. However, don't let the "mini" part of the name fool you. Although the tool has a relatively light impact on your application, this is a complex tool that has several different options and flexibility for helping you fine tune application performance. Best of all, it's free and licensed under the Apache 2.0 license with the source code available on GitHub.

At runtime, MiniProfiler puts an easily accessible but unobtrusive element in the upper-left corner of the page that displays the total loading time for the page, see Figure 1. This is in the default ASP.NET MVC 4 Internet application.

If you click the box, then you get more detailed information, see Figure 2.

And this default configuration is just the beginning. There are several different options for configuring how MiniProfiler works in your application, and you can instrument code to gather specific performance information about code that has performance problems. For example, you could change the About action method for the default ASP.NET MVC 3 Internet application's Home controller to the following, which uses some sample code from the MiniProfiler site:

This will change the MiniProfiler report with your custom benchmarks, see Figure 3.

Implementing MiniProfiler in a project is pretty simple. Although I describe this process for an ASP.NET MVC 4 application, the steps are similar for different applications:

That's it. When you run your application, you'll have the basic functionality of MiniProfiler. There are plenty of different ways to integrate MiniProfiler into your application. And there are tools that let you integrate closely with ADO.NET code as well as Entity Framework that can give you deep insight into where your data access code is having problems.

One of the nice things about the work that MiniProfiler's lead developer Sam Saffron' has done for ASP.NET MVC applications is to implement the NuGet package so that it's almost brain-dead simple to use MiniProfiler. When you install MiniProfiler in an ASP.NET MVC 3 or 4 project, check out the MiniProfiler code file in the App_Start folder to understand the details.

MiniProfiler works with just about any ASP.NET application, including Web Forms and Ruby applications. It's a very nice and effective way to explore the performance characteristics of your application with relatively little impact on the application. Its delivery as a NuGet package makes it trivial to add to a project, at least for the default usage. And it's easily usable in production applications. Check it out!