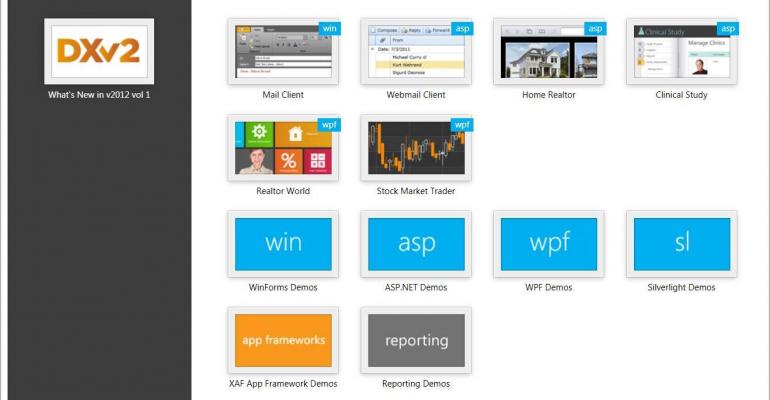 With the upcoming release of Windows 8, Microsoft Windows and .NET developers are shifting their focus to build eye-catching web applications with powerful user interfaces using elements inherited from the operating system. Today's software development tools must thus perform equally well in supporting the creation of attractive, intuitive, and fast-performing UIs and meeting developers' needs throughout the application development lifecycle. The latest release of DevExpress's DXperience, version 12.1, provides advanced controls that do a good job of meeting both sets of needs. Join me as I take you on a quick tour of the highlights of DXperience 12.1.

DevExpress has completely renovated the DXperience installation wizard to not only look more attractive but also to be more user friendly. The installer automatically adds the required controls into the Visual Studio Toolbox, enabling developers to work with the controls immediately after the completion of the installation process.

DXperience 12.1 features a new welcome screen with easy access to demo applications and samples, as shown in Figure 1.

The look and feel of the individual product pages has also been substantially modified, as you can see in Figure 2, which shows the ASP.NET product landing page.

A notable new feature of DXperience 12.1 is its support for touch applications. With the new release, developers can create applications for touch-based devices, such as tablets and smartphones powered with iOS and Android as well as ASP.NET applications with a Windows 8 Metro user interface style. Touch controls for iOS include the Callback Panel, Combo Box, Grid View, List Box, Menu, Panel, Pivot Grid, Pop-up, Scheduler, Splitter, and TreeList controls.

The product has been expanded to include one more popular bar code type, Intelligent Mail, which is used with XtraReports. Additionally, developers can now easily provide a list of static values for parameters without writing any code, and end users can select specified values from the look-up editor.

DXperience 12.1 ships with a Project Wizard, shown in Figure 3, which enables developers to easily set up the layout of website pages.

Using the wizard, you can select a theme for the site and define localization for the application—for example, set up different configuration options for each control and for the entire website.

A feature I especially appreciate in DXperience 12.1 is its flexible theming mechanism, which lets developers easily customize the look of their application's UI using one of the built-in themes—including a theme that emulates the look and feel of an iOS platform. You can preview the selected theme at design time. You also have the option of creating your own themes for ASP.NET applications using the ASP.NET Theme Builder tool, shown in Figure 4.

DXperience 12.1 includes a number of productivity-improving enhancements to existing controls. The ASPxGridView control includes a new multi-select mode for header filter, which allows end users to select multiple items to be included in the filter criteria. Additionally, the pop-up select list includes a Select All option, shown in Figure 5, which users will find helpful for filtering.

For instance, imagine a scenario where there are around 1,000 database entries and you would like to select only 50 of them. In this case, a user can select all entries with Select All, then filter the grid according to their requirements.

The ASPxPager control includes a page-size selector, which when activated allows end users to dynamically change the number of rows displayed within a data control. For instance, if your database has 60 rows, you can configure the grid to display 20 to 60 rows on each page. Your users will be able to select the option that's convenient for them.

DXperience 12.1 also includes the new ASP.NET PopupControl, which lets developers display a pop-up window with a fade-in effect. Finally, the Chart control introduces a feature that automatically adjusts chart axis labels to avoid overlaps during resizing and also detects data types. In addition, developers can now create charts with tooltips and a crosshair cursor, both of which features which are automatically enabled by default and don't require any coding to implement.

In addition to providing many enhancements to ASP.NET controls, DXperience 12.1 includes improvements to many of its controls for other .NET platforms, including Silverlight, WinForms, and Windows Presentation Foundation (WPF). Notable additions to the WinForms control suite are a Splash Screen Manager and a theme based on the Windows 8 Metro UI.

DevExpress provides a wide range of learning resources with the help of blogs and videos that enable developers to quickly learn the various features of each control included with the product. The blog posts are authored by product team members and consist of tips and tricks to help developers use the controls more effectively. I found that the online videos, which demonstrate the use of the controls with Visual Studio, helped me get up to speed with the DXperience 12.1 controls quickly. I would like to see included in the installation package a few important videos, so that developers can watch them offline (especially helpful for developers in parts of the world with slower Internet connections).

DXperience 12.1 also ships with several scenario-based sample applications including complete source code, which demonstrate the functionality of various controls in real-world scenarios. You can view a live demo of the samples by selecting the required option from the landing page and preview the code by selecting the Code option.

The product also includes several demo applications, which you access from the Getting Started screen. For instance, the Webmail client application enables you to view email messages and manage schedules using calendar and contact modules. Working through the demos helped me to visualize the power of the controls included with DXperience 12.1.

DevExpress offers DXperience in a variety of subscription-based packages. At the high end is the Universal Subscription, which includes all the controls, the CodeRush productivity tool, and the XAF framework. Lower-priced options, including the Enterprise Subscription, individual control sets, and CodeRush, are also available.

Like its predecessors, DXperience 12.1 provides a comprehensive set of controls that gives .NET developers the means to easily build visually stunning ASP.NET, Windows Forms, Silverlight, and WPF applications in a minimum amount of time. If your budget allows it, I recommend the Universal Subscription as a worthwhile investment in your development productivity.

Anand Narayanaswamy is an ASPInsider. He works as a freelance writer based in Trivandrum, India, and is the author of Community Server Quickly (Packt).