/sites/all/themes/penton_subtheme_itprotoday/images/logos/footer.png
Recent
Recent
Microsoft Productivity Tools Get New Updates, Integrations
May 29, 2020
The Dunk Tank Reconsidered: How OCP May Yet Immerse Your Servers
May 27, 2020
The End of Open Source Python 2: What It Means for Enterprises
May 24, 2020
Huawei Is Back with New OceanStor Storage Products
May 23, 2020
Flexibility, Cost Drive Microsoft Cosmos DB Improvements
May 23, 2020
Featured
Make Remote Working Work for the Enterprise
Oct 09, 2019
Windows 7 to 10 Migration Tools Buyer’s Guide
Jun 17, 2019
5 Key IT Skills for the New Decade
Jun 27, 2019
Why a Special Purpose CPU May Be in Your Storage Future
May 23, 2020
Tool Time Blog
brought to you by 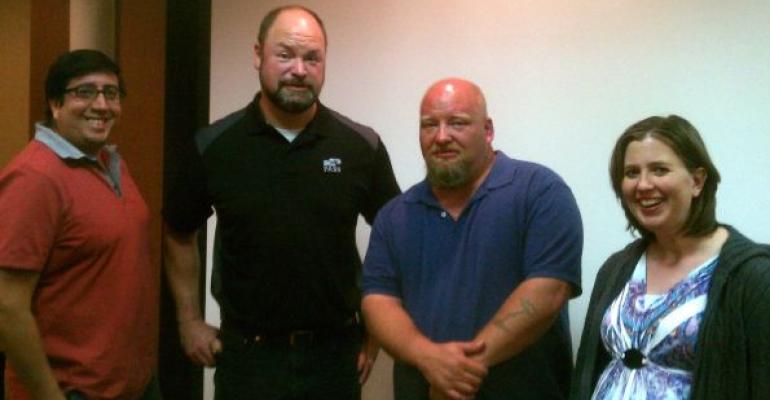 Two New Slide Decks. Plus, the Week in Colorado.

I had the honor of traveling the great state of Colorado last week, speaking at the PASS chapters in Boulder, Colorado Springs, and Denver.  At all three events, we had a stellar attendance and, at least in Denver, broke all the records in recent memory both in terms of overall attendance and in first-timers.  Denver, in fact, was standing room only and had nearly 30 first time attendees.  Great news!  I also want to give a special shout-out of thanks and appreciation to Chris Shaw (Twitter | Blog) whose hard work and tenacity ensured that all of Colorado got to see me speak. From left to right, Gabriel Villa (Twitter), me, Chris Shaw, and Rebecca Mitchell (Twitter).  If it weren't for Chris, I wouldn't have been there.  Thanks for putting in the time, amigo!

During the 3-day jaunt, I presented two of my more popular sessions.  These are updated slide decks, in case you want to download them here:

Be sure to check in the Slides area of the website, if you want to see the links for SpeakerRate, and in the case of several of my presentations, white papers, video recordings, etc. It's the People that Matter

A Blast from the SQLPASS Past!

I've always tried to maintain the relationships I built with the founding members of the PASS board of directors.  After their time on the PASS board, almost all of them have moved on from SQL Server to other adventures.  Pam Smith, the first president of the organization, is now a professor.  Guy Brown, the second president, is now the director of IT at his same employer, rather than just SQL Server as when he was on the PASS board.  A few, such as Kurt Windisch, a former VP of PASS, and my good friend Joe Webb (Twitter | Blog), are still active in the SQL Server space.  One relationship that I've enjoyed over the years is with PASS' original Microsoft liaison and now a Denver-area software entrepreneur Steve Murchie (at right) running his own healthcare IT outfit.  Steve has been a source of inspiration to me and also of great advice for all things startup-related.  It was great to connect with Steve and catch up on his latest doings.

I also got to enjoy an evening out with the local attendees after the Denver user group meeting.  It was great to hang out with folks there.  I got to meet Kevin Cox (twitter), a member of Microsoft's incredibly talented SQLCAT group, and for whom I was a technical editor on a SQL Server v6.5 book back in the Neanderthal era.  That shows just how old both Kevin and I actually are.  Other cool folks that I got to meet included Steve Wake, Mike Fal, Marc Beacom, Jason Kassay, Jason Horner and my ol' buddy, Kelly the Greeley Geek.

On top of that, long-time SQL Server MVP and all-around awesome guy Steve Jones (Twitter | Blog) visited.  I kept him out way too late that night which, to be honest, isn't usually my style.  But the good conversation propelled us on past midnight.

I've written for SQL Server Professional (formerly the artist known as "SQLMag") in some form or another starting from my first cover article for them way back in the mid 1990's.  My Tool Time column has been going strong there since, oh, around 2006 iirc.  For most of the time I've known the folks at SQLMag, they were located in Loveland, CO but they were able to move to some incredibly nice digs just up the road in Fort Collins.  In all the many years, I've written for them, I'd never been to their offices - until now.  It was great to visit and break bread with Megan (to my right), Blair (across), and Jayleen (across and to my right)!

I've always supported SQLMag and encourage you to subscribe.  On top of the goodness already in the digital magazine, there are some neat developments coming down the pipeline with SQLMag which I think we'll all enjoy.  Be sure to subscribe today!  (You can click the badge on the left or simply go to http://www.sqlmag.com).

My current travel schedule is pinned up on this blog post HERE.  However, I also know of a couple on-line appearances and probably a trip between the long gap between now and my next in-person appearance at the Orlando SQL Saturday at the end of September, where I'll also be teaching a pre-conference seminar (register HERE for the seminar).

The first on-line event to note is my a presentation by SSWUG of my Leadership Skills for IT Professionals video series, starting on August 24th.  Sign up using the hyperlink (note that a video plays immediately upon loading the webpage, in case you want to be ready to pause or stop it).  You can also buy a DVD set of the 14 hours of leadership training content.

I'll also be speaking on the topic of influence in the next 24 Hours of PASS coming up on September 20th and 21st.  Registration for the twenty-four hours of around the clock presentations is completely free and well worth your time.  Check the schedule for the event and register!  Even if you can only watch one or two sessions (or even zero sessions), be sure to register so that you'll automatically be notified when the sessions become available as streaming media.