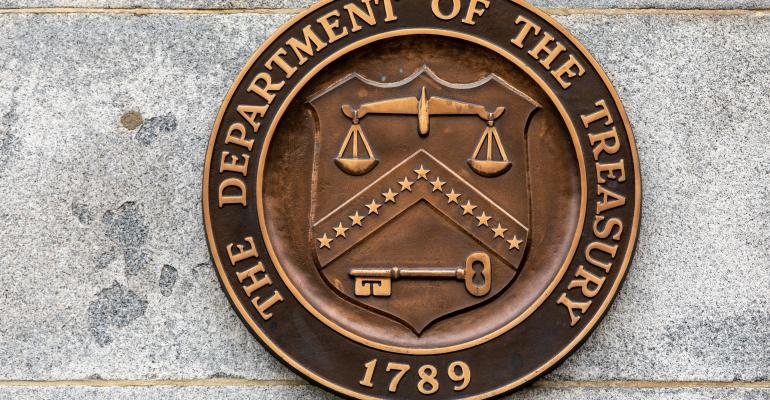 The average amount of reported ransomware transactions per month in 2021 was $102.3 million, according to the report. If the current trend continues, the number of ransomware reports this year may exceed the number of reports filed in the previous 10 years combined.

(Bloomberg) -- There was $590 million in suspicious activity related to ransomware in the first six months of 2021, exceeding the entire amount in 2020, when $416 million was reported, according to a report released Friday by the U.S. Treasury Department’s Financial Crimes Enforcement Network.

The average amount of reported ransomware transactions per month in 2021 was $102.3 million, according to the report. If the current trend continues, suspicious activity reports filed in 2021 “are projected to have a higher ransomware-related transaction value than SARs filed in the previous 10 years combined,” according to the report. SARs is shorthand for suspicious activity reports.

U.S. based cybersecurity companies filed most of the SARs related to ransomware while banks and cryptocurrency exchanges filed more than a third of the reports. The reports reflect just how quickly ransomware attacks have grown.

Reporting ransomware payments to the Treasury via a suspicious activity report is often a requirement of cybersecurity insurance policies, according to a person familiar with the matter.

The Treasury Department also identified 68 ransomware variants, noting that the most commonly reported types were REvil, Conti and DarkSide. Ransomware groups often sell their malware, or variant, to affiliates who then use it to plot attacks, in what is known as ransomware-as-a-service. REvil, Conti and DarkSide are suspected by cybersecurity firms of being tied to Russia in some way -- because they use the Russian language or are suspected of being based there.

The report was filed as the Treasury Department issued guidance to the virtual currency industry to prevent exploitation by entities sanctioned by the U.S. and ransomware groups. It is part of a broader effort by the Biden administration to attempt to curb ransomware attacks. In ransomware attacks, hackers encrypt a victim’s files and promise to unlock them if they are paid a fee.

Among the more notable attacks were those in May on Colonial Pipeline Co. in May that squeezed fuel supplies on the East Coast and on the meatpacker JBS SA.

The Treasury report stated that ransomware actors are increasingly requesting payment in cryptocurrencies like Monero, which are designed to enhance anonymity.