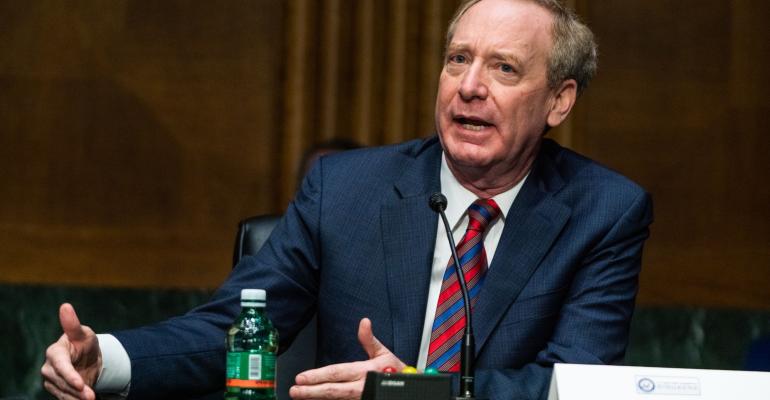 (Bloomberg) -- Microsoft Corp. President Brad Smith is calling for companies, schools and governments to dramatically increase training workers for new and redesigned roles tackling the climate crisis. The software giant, which has pledged to remove more carbon than it emits by 2030, says the lack of skills in areas like carbon accounting, green procurement and supply chain management is a threat to the kind of progress needed to arrest global warming.

The company, along with the Boston Consulting Group, studied 15 companies they said were leading the pack in sustainability innovation to produce a report on what’s needed. Microsoft plans to develop and share more training resources through its LinkedIn business, work with United Nations and International Monetary Fund groups and NGOs, as well as convening a conference of corporate chief sustainability officers to share best practices.

Smith will discuss the effort at the Web Summit conference today in Lisbon. He spoke with Bloomberg Green about what’s needed in the workforce to tackle climate change. The interview has been edited and condensed.

As you see it, what is the challenge?

Roughly 3,900 companies around the world have signed up for climate pledges. But what we're finding as a leading technology provider to these companies, is that we all now need to figure out how to turn these pledges into progress. That's easier said than done. It takes a real revolution in different business processes and in the use of digital technology as core components. But foundationally, it all relies on building a more skilled workforce.

How do we we know we have a shortfall in these types of skills?

LinkedIn did a study a year ago—what it showed was that the number of jobs in the economy that require sustainability skills is growing by 8% a year but the number of people in the workforce that have these skills is growing by only 6% a year. So we're seeing a gap, and in fact, we're seeing a widening of this gap. When we entered the digital era, we needed to bring computer science into schools and we needed to bring digital fluency into the workplace. When we've reviewed the data, employers around the world really invested more in employee training between 1980 and 2000. Computers entered the workforce— people needed to be trained how to use them. But we saw employer investments in employee training really declining after the year 2000 and have been stagnating ever since. We're going to need to reinvest in employee training.

What kind of jobs are we talking about?

Some of these will be sustainability specialists. A great many more are people who work on a wide variety of other business processes like procurement and supply chain management, for example, and now they need a significant dose of sustainability background and fluency in order to help their companies meet their climate pledges. There'll be new jobs and existing jobs. They are people who are doing carbon accounting — these may be people who have done financial accounting, but now they'll be financial accountants and carbon accountants at the same time.

Will it be more an issue of training people for new jobs or retraining in existing roles?

For every category I can name that’s new there's probably five that are existing, but changing, because of the climate pledges that companies have made. An easy example: People have to change the procurement process. They have to redesign those reports from their suppliers. They then need to partner with their suppliers to help them drive down their carbon emissions. Another really interesting example we discovered within Microsoft is basically, virtually all the world's kitchens have to move from cooking on gas to cooking on electricity instead. We've started to do that with some of the big kitchens at Microsoft. And in the coming years we'll start to change all of our kitchens and our cafeterias so that they're using electric rather than gas. It turns out that people need to be retrained in the way they cook.

What's the risk if we don't fix the skills shortfall here?

We need to address this with a huge sense of urgency. It’s easy as this decade has unfolded to focus first on Covid and then focus on the war in Ukraine, focus on the energy shortage in Europe, and lose sight of the urgency of the climate crisis. But it is a crisis.