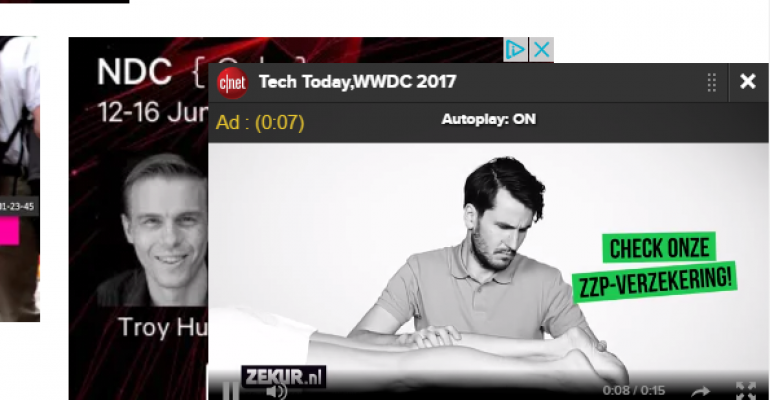 Security Sense: Apple Just Reminded Me How Sucky The Web Has Become

So the annual Apple dog and pony show we know as WWDC rolled out this week and per usual, I was keen to soak up everything on offer that was sure to improve my life dramatically. TV improvements, Apple Watch improvements and then Safari improvements, all of which are arguably little steps forward in the right direction. But it was that final offering – Safari on macOS – that frankly made me a bit depressed. Not because of any shortcoming on Apple’s part, rather how it caused me to reflect on the industry.

The new features include auto-play video blocking which I think we’ll all agree, is a good thing. This is a terrible user experience and I was lamenting this just yesterday as I loaded a page on CNET during a workshop I was presenting to 40 people. Here I was trying to show an important industry precedent related to the abuse of tracking wifi devices by MAC address (the tracking was done by rubbish bins in London, no less) and in all their wisdom, CNET decided it would make sense to start blasting an ad through my speakers. And then, just to add insult to injury, they managed to do this whilst overlaying the video on another ad, this one with my head on it!

I kept watching the WWDC presentation and they moved on to how Safari would include a tracker blocker. Fair enough, privacy is important to people and let’s face it, trackers can be kind of creepy (refer to the aforementioned instance of my head appearing on an ad for an event I’m speaking at next week). Of course, there’s been aftermarket solutions to do this for many years, but that’s something you need to consciously seek out as a user and when you do, that then that causes the next set of problems…

As I was lamenting Apple needing to invest effort into combatting lousy behaviour by websites, I found myself embroiled in a Twitter debate going back to a blog post of mine from last year about how ad blockers are part of the problem. Here I argued that people had many very valid reasons to block ads: they can be intrusive (even when not auto-playing video), consume unnecessary bandwidth, have often delivered malicious payloads to users and of course, there’s the tracking issue. Yet popular ad blockers go further than that blocking not just ads with the aforementioned nasty behaviours, but even those like the sponsorship model I introduced which is nothing more than a line of text. Rather than encouraging responsible ads, they make it harder for publishers like myself to do the right thing.

This all contributed to the general feeling of suckiness I was starkly reminded of whilst watching that keynote. The overtly aggressive push by advertisers that hurts consumers, the “kill them all” attitude of ad blockers that hurts publishers and the additional effort it all causes companies like Apple to invest trying to save us from a set of behaviours that should never exist in the first place. And that all kind of sucks.